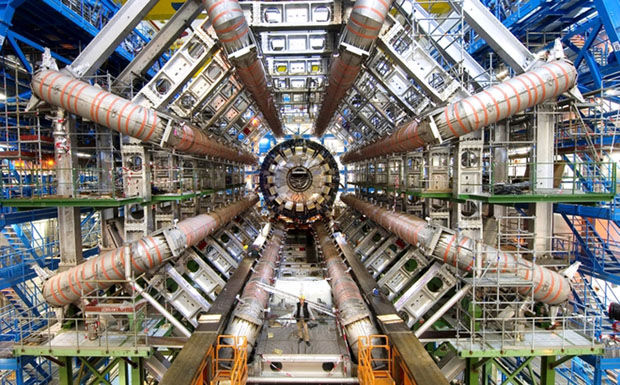 This is one of the huge particle detectors in the Large Hadron Collider, a 17 mile-long tunnel under the French-Swiss border. They're searching for evidence of what happened right after- and perhaps before- the Big Bang. (European Center for Nuclear Research (CERN)/MCT)

Science fiction tells tales of humans transcending space and time to discover new worlds and establish colonies among the stars. A group of Washington State researchers is learning to harness antimatter energy in hopes of blurring that line between fact and fiction.

Antimatter is a convoluted subject of particle physics research in which antiparticles, their behaviors and their prospective uses are examined. Antiparticles and regular particles are opposite in charge, and when they encounter each other both are annihilated. The result of this contact is a release of workable energy proportional to the mass of the two particles.

Antimatter has been recognized as a possible fuel source by aerospace and military institutions, and has uncovered many clues that help solve the mysteries of the universe.

Physicist Marc Weber, part of the team led by Kelvin Lynn, said the main obstacles on the road to harnessing antimatter energy are efficiently creating antiparticles, containing them, avoiding annihilation and channeling their energy.

“You want to keep the particles in a bottle, but any contact with a wall or anything else leads to annihilation,” Weber said. “There’s a lot of pain and repetition in the process.”

After colliding in a vacuum tube, the antiparticles are trapped in a silicon containment tube about three inches in circumference and two inches long, which sits inside a powerful magnetic field. The tube is made of 11-15 silicon wafers, each with thousands of tiny holes that are precisely aligned to hold the antiparticles.

Since antiparticles constantly repel each other and will be destroyed if they touch anything, containing them is similar to playing Operation in zero gravity.

Physicists at CERN in Geneva, Switzerland have managed to hold on to antiparticles for 16 minutes, a monumental achievement which received huge fanfare in the particle physics community.

Lynn’s team has managed to keep the particles trapped for about one second.

Weber said a space shuttle uses 2,000 metric tons of rocket fuel during its trek, including during launch. With antimatter fuel, the same spacecraft would only need less than half a gram. The freed-up weight and space would make room for other cargo, and the efficiency of the fuel would allow for potential deep-space travel.

Research Assistant Kasey Lund spends his days in the lab running the accelerator and creating the elusive antiparticles. He said the gas particles they use are “99.9999% pure”, which is the research standard. Combined with the vacuum environment, purity is retained throughout the process.

Lund said if their research yields usable results, the current niche market for accelerators could become more open—making use and research of antiparticles more accessible and less expensive.

“It really is just like Star Trek, we just don’t have enough of the stuff,” Lund said. “In the next 50 years, this technology might bring huge changes in aerospace and the military.”

Weber said if nothing else, research into antimatter energy might provide salvation for humanity at some point in the future.

“We as humans have the power to destroy the planet one hundred times over,” Weber said. “We need a backup plan.”