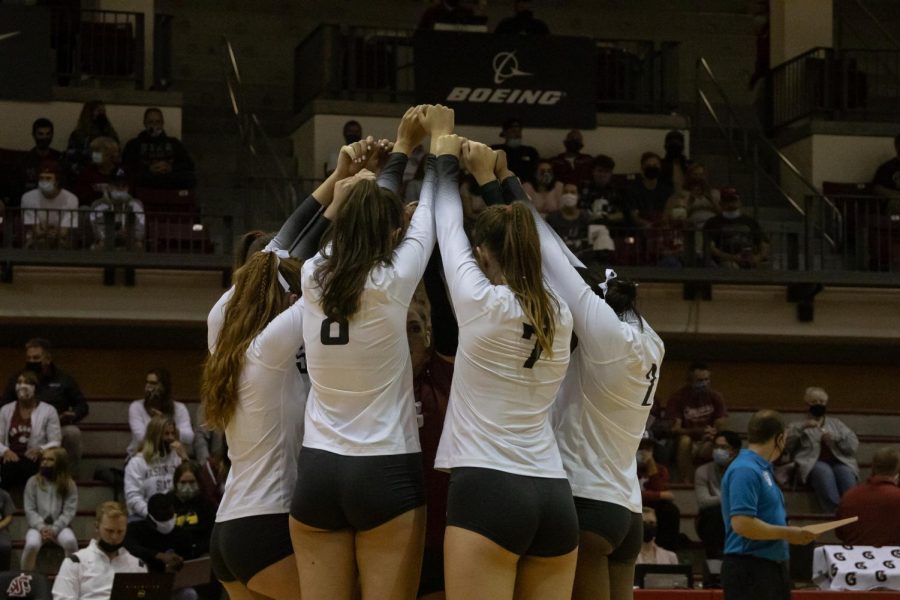 WSU volleyball celebrates a point against the Gonzaga Bulldogs on Sept. 10, 2021, inside Bohler Gym.

The WSU volleyball team had an impressive Cougar Challenge tournament, sweeping all teams 3-0 in three matches.

After a rough start and losing their first four matches, the women looked like they had lost their groove a little bit. However, after the Cougar Challenge, this was proven to not be the case. The women dominated in their last three matches sweeping their opponents.

The women have two more opportunities to win these upcoming matches to go into Pac-12 play win a winning record. The Cougs are down two standout players this year, but freshman opposite Katy Ryan is still making an outstanding freshman debut for the Cougs so far.

Junior outside hitter Pia Timmer has also been making monster plays for the Cougs defensively and offensively. Junior middle blocker Magda Jehlarova has been making strides on the court as well.

The Cougs have also had an impressive number of services aces going into the Thunderdome Classic this weekend. These next three matches are extremely important for the Cougs to win.

VCU is currently 4-5 on the season. In their last three matches, the Rams won two at the Four Points Tallahassee Seminole Volleyball Invitational. The Rams went on to beat Tulane in five sets 3-2 and beat Samford 3-0.

They did lose to Florida State 0-3, finishing out the tournament 2-1.  Junior Qairo Bentley led the team with 13 kills in that match. Bentley had also the highest number of kills on the season last year for VCU. Last season, Bentley also recorded five double-doubles.

UCSB is 3-6 on the season so far. Last week, the Gauchos traveled to Wyoming to play Missouri, Wyoming and Northwestern. Overall, UCSB did pretty well.

They won two out of the three matches they played. Their only loss at UniWyo Invite was to Wyoming in a close 3-2 match. Redshirt sophomore outside hitter Tallulah Froley led the Gauchos with 16 kills on the match and has 71 kills overall on record for the season.

This next tournament should be some fun ones to watch. You can keep up live with the women on the WSU Athletics website. There is not currently a stream set up for these matches. The women play at 10 a.m. Friday and 11 a.m. and 7 p.m. Saturday.