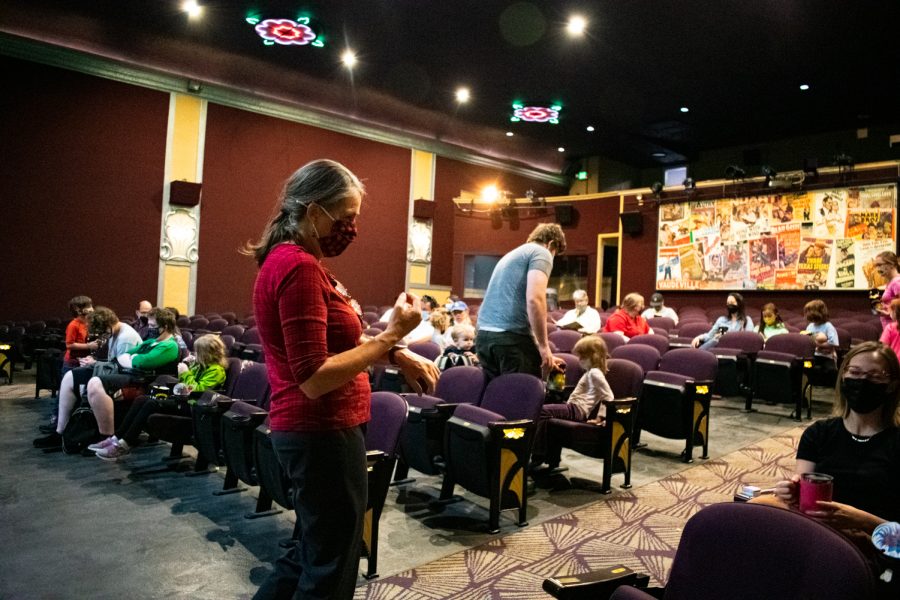 Annette Pimentel engages with community members of all ages before her book release party at the Kenworthy Performing Arts Centre in Moscow.

Award-winning author Annette Pimentel held a release party and signing on Sept. 11 for her children’s book, “Pura’s Cuentos: How Pura Belpré Reshaped Libraries with Her Stories.”

BookPeople of Moscow, a locally-owned bookstore, hosted Pimentel’s release party and book signing. Families gathered at the Kenworthy Performing Arts Centre in Moscow, Idaho to eat popcorn and participate in the interactive storytime.

Pimentel involved the children in her reading by handing out paper puppets and inviting the audience to say the lines along with the characters.

As a librarian, Belpré held storytimes in both English and Spanish and involved the children through the use of puppets, something Pimentel incorporated into her event on Saturday.

Pimentel prepared for writing Belpré’s story through extensive research and a trip to New York to see Belpré’s handwritten drafts and puppets firsthand. While in New York, she also interviewed one of Belpré’s former coworkers and her coworker’s son, who would attend Belpré’s readings.

“It was such a joy to talk to her,” Pimentel said. “Her son talked openly about what it meant for him to hear stories in Spanish, and he started crying when he was telling me.”

Pimentel noted she also recognizes the importance of her stories for the children listening to Saturday’s reading.

Pimentel’s books focus on people whose stories are overlooked in history, her husband David Pimentel said. Pimentel tries to find the stories that are not being told.

Community members of all ages stayed after the book release party to receive signed copies of the book.

“A writer’s life is very solitary, so it’s really wonderful to have a moment to connect with the kids and see their perspective on things,” Pimentel said.

BookPeople of Moscow is hosting many events throughout the fall. On Wednesday, WSU historian Trevor Bond discussed his book about repatriating Nez Perce artifacts back to the tribe. They will also present the memoirs of Moscow natives Tina Ontiveros and DJ Lee on Oct. 13.

“We all have really busy schedules, but it means a lot when everybody sets that time aside and gets together in the same moment,” Price said.

Price added that Pimentel’s reading is notable because she centers her stories around real, inspirational women of different ethnicities.

“It’s important for people to learn about the small steps that they can take to make social justice a reality,” Price said.