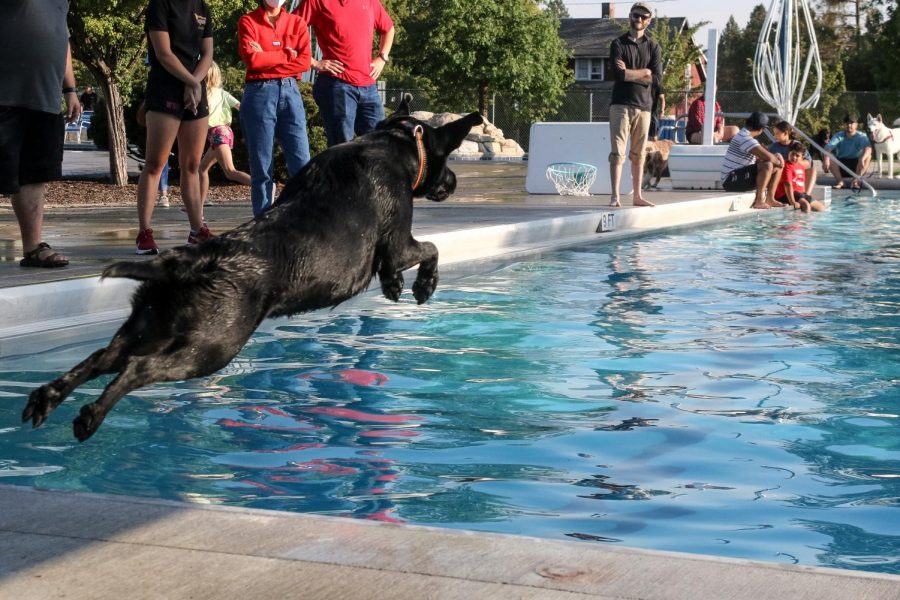 Black lab Molly launches into the pool at Hamilton-Lowe Aquatics Center in Moscow on Sunday afternoon.

Hundreds of dogs — labs, terriers and everything in between — took to the water Sunday for the Humane Society of the Palouse’s 14th annual doggy pool day at Hamilton-Lowe Aquatics Center in Moscow, Idaho.

The event, which was canceled last year because of the pandemic is the humane society’s biggest fundraiser of the year, said Emily Spellman, event organizer and Humane Society of the Palouse board member. This year, it raised $4,200 for the organization.

“For missing last year and for people still being worried to come out, we had a really good turnout,” she said.

Dogs had the opportunity to use the outdoor facilities including the lap pool and slide area, before it is drained and cleaned for winter. The City of Moscow donates the area for the humane society to use for the day, Spellman said.

The event marked Molly’s return to activity after a shoulder injury she sustained last February while playing ball, Pavek said. She has been going through rehab at WSU for the last year.

“It’s been a long road, so this is great,” Pavek said. “Swimming is really great for her.”

Sandra Kelly, humane society board member, officiated the jump contest. She said she loves getting to know all the dogs that attend the event, especially the ones who return year after year.

“This is like Christmas,” Kelly said. “My whole world seems to be events, but this is my favorite.”

Money from the event goes to the humane society’s Merlin Fund, which helps pay for emergency surgeries for pets in need.

Moscow resident Greg Meyer was walking by and decided to stop to see the dogs. He said the event is a great way to end the swimming season because it brings people in Moscow together around the dogs they love.

“This seriously is the best day of the year,” Spellman said. “Everybody is so happy, the dogs are wet — when else do you get to do this?”