WSU ‘cougs’ it against USC 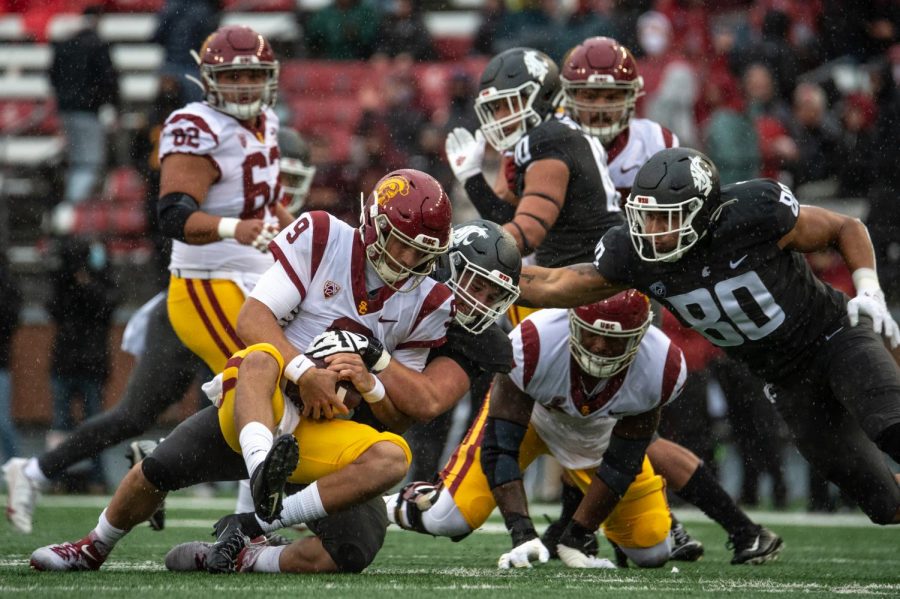 The Cougar first and second halves were stark opposites of each other, resulting in a 45-14 USC win over WSU.

After going up 14-0 in the first half, WSU fans hoped Head Coach Nick Rolovich could guide the team to an upset win over USC. Coug fans would leave disappointed after USC scored 45 unanswered points.

On the first drive of the game, USC’s quarterback Kedon Slovis was injured after being sacked by WSU’s Andrew Edson. The trainers would eventually take Slovis off the field. Slovis was replaced by true freshman quarterback Jaxson Dart.

WSU started its first drive strong, marching down the field and into the red zone. Much of WSU’s first-quarter yards came from senior running back Max Borghi, who had four attempts for 36 yards in the first drive alone.

WSU quarterback Jayden de Laura connected with wide receiver Travell Harris for the first touchdown of the game, giving the Cougs a 7-0 lead.

In the red zone for the third time, the Cougars scored on a successful pass from de Laura to Harris. The touchdown put WSU up 14-0 and marked Harris’s second touchdown reception of the game.

Dart found success just before half-time, connecting with wide receiver Gary Bryant Jr. in the end zone to make the game 7-14 with the Cougs still up. The touchdown marked Dart’s first touchdown of his collegiate career.

At the half, WSU marched into the locker room up by one touchdown. WSU lost all momentum after coming back onto the field.

Dart and the Trojans dominated the third quarter, scoring four touchdowns in 15 minutes — one of which was another connection between Dart and Bryant Jr. The touchdown was the second of the day for Bryant Jr. and gave USC their first lead of the game 21-14.

After the half, de Laura remained on the sideline wearing a brace on his right leg. The Cougs would begin the half with Victor Gabalis taking over as quarterback. WSU struggled to perform in the third quarter, having a total of -2 yards on offense.

Later in the third quarter, WSU showed defensive presence with an interception by Armani Marsh. When asked about his performance, Marsh remained humble, saying “I was just doing my job.”

“He flies to the ball. He has a knack for getting to the ball,” Harris said about Marsh.

After Marsh’s interception, USC’s Drake Jackson forced the ball out of Gabalis’ hands in the end zone. Defensive tackle Tuli Tuipulotu recovered the ball for a Trojan touchdown, giving USC a 14-point lead over WSU 28-14.

De Laura came back into the game on the next drive. De Laura’s first play back in the game was a long throw intended for Jackson Jr. and intercepted by USC’s Calen Bullock. Bullock’s pick set up the Trojan offense to find the end zone again, this time with Drake London catching the fifth USC touchdown of the game. London’s catch crushed any chance of a WSU comeback.