The riptide we call depression 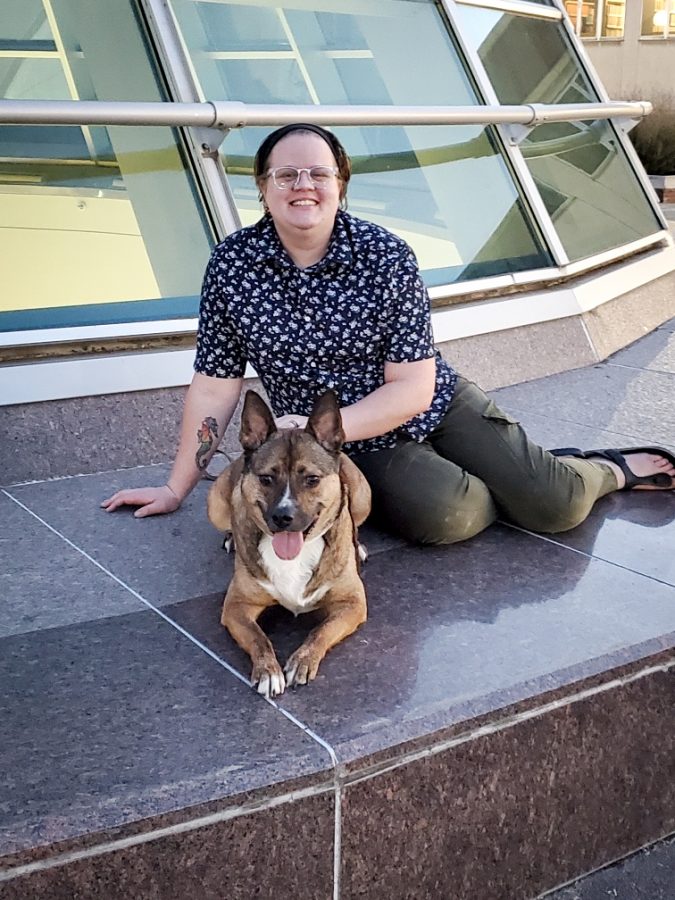 Tawn Christians adopted Apollo after being approved for an emotional support animal and found that he helped xir through some dark parts of xir life.

When you’re in a riptide in the ocean, when you try to swim directly against it, it will pull you deeper. When you swim sideways and parallel with the current, you can escape it.

Christians had depression xir entire life. It wasn’t something xir family and friends talked about. Up until xi went to xir undergraduate program at University of Wisconsin, Christians did not seek counseling or any type of help.

“I survived to that point of my life by sheer force of will, which was really unhealthy,” Christians said.

Xi reached out to a counselor while attending college when xi realized things weren’t getting better; xi spent most of xir time sleeping and crying in xir dorm and struggled to make friends. Christians said it wasn’t a great place for xir to be in.

Being a psychology major, the topic of mental health and depression was more normalized. Xi felt more comfortable talking with someone after experiencing the openness of that program.

“I ended up on medication for depression while seeing that counselor. It took me six years to find one that actually worked for me,” Christians said. “Some made me feel worse, some sent me to the hospital due to reactions, some made me feel numb.”

“While seeing my counselor during my undergrad program, they taught me coping mechanisms to help fight my depression,” Christians said.

If xi gives into xir depression and lets it take xir down, xi finds a way to cope with it. Some days it may be watching a comforting TV show, listening to music or reaching out to friends, Christians said.

When xi does that, Christians is able to swim sideways with the current and fight through xir riptide.

After xir undergraduate program, Christians enrolled in Indiana State University. It was a culture shock, even though it was six hours away from xir home, Christians said.

“I was coming from a place in my undergrad where it was very accepting and open and had many good friends I could meet with all the time,” xi said. “I felt isolated, and it was not as accepting and supportive. My partner at the time was long-distance, so it was hard. I didn’t have the same support system in Indiana.”

Xi was taking medication at the time and couldn’t find doctors in Indiana that would prescribe it to xir. Xi started going through medication withdrawal and ended up in the hospital for a suicide attempt, Christians said.

“I was withdrawn from this medication that I needed. I was in training for residential life, and was in a training called Campus Connect, which we offer here at WSU,” Christians said. “In that training, they taught us how to help someone who is experiencing suicidal thoughts. One of the things they taught us was to ask the question ‘Are you thinking about killing yourself?’”

The training had them practice saying that, and xi was sitting in a room with 200 hundred people who were asking, “Are you thinking about killing yourself?” Xi said.

“I was sitting with all these people asking that question when I realized, ‘yeah, yeah I was going to kill myself,” Christians said.

Xi realized xi was not in a good place and ran out of the room. Christians’ superviser followed behind xir and asked if xi was okay. Xi knew that if xi didn’t seek help right now and didn’t go to the hospital right then and there, Christians was not going to be alive the next day.

“It hit me really hard to face those feelings. I went to the hospital that day and was there for 13 days,” Christians said. “That was really hard, but it was one of those things where I’m simultaneously proud of and really don’t like.”

Christians is really proud of xirself for making that decision and seeking that help, xi said.

Since 2017, xi has tried to share xir story with as many people as xi can. Christians knows what it feels like to look down that hole and think about jumping in and to actually jump in.  Xi knows what it is like to reach out and ask for help when you do jump in, Christians said.

“Since then, it has been easier, but it is not perfect,” xi said.

Christians got approval for an emotional support animal, which xi needed at the time when xi was feeling isolated in Indiana, Christians said.

“I still have that dog; his name is Apollo,” xi said. “He’s been a huge part of giving me a reason to keep going.”

Another reason Christians keeps going is spite. Some people use rainbows and butterflies and all the good things to keep going through life, but xi found that spite works the best for xir, Christians said.

“I know one day, I’m going to wake up and some of the people I don’t agree with politically are not going to be alive anymore,” Christians said. “I can’t let Mitch McConnell outlive me.”

These people don’t like who xi is. They don’t support the LGBTQ community, and if they don’t like xir, why would xi like them, Christians said.

“I’m here because I love my family. I love my husband and my dog, but also because I just really have to outlive so many people,” Christians said.

As a res-ed director, part of xir job is to be there when RAs are working with people who are experiencing suicidal thoughts and crises , xi said.

“I’m here to help them find the support they need, whether or not they feel comfortable asking for help,” Christians said. “I’m a survivor, I let them know.”

Xi has a tattoo on xir arm that says “I will love a;ain.”

Xi would have never changed what xi faced in xir life.

“For so many people, depression is part of who they are. Your life could be great, and you could still be facing that battle,” Christians said. “As much as it sucks, it’s part of me, and I’ve spent so much time of my life in pain, but I have so much empathy for people, and they can come talk to me about how they are feeling.”

The one thing Christians would change in xir past would be tell xir younger self, “Hey, you have depression.”

“I didn’t know that was a thing I had. I just thought there was something wrong with me,” Christians said. “I have a disease, I’m not a bad person, and I haven’t done bad things. My body just needs more support.”

If xi would have someone tell xir that when xi was younger, Christians would have done that. But xi would not go back and not have depression completely, Christians said.

Depression doesn’t discriminate. Someone could be the happiest person on Earth and still have depression, anxiety or any mental health disease, xi said.

“You wouldn’t talk to someone with diabetes and say they don’t need insulin,” Christians said. “It’s exactly the same with mental health. It’s OK to get the mental help and treatment you need.”

Therapy is a good resource, but it doesn’t always work for everyone. Try it out, but if it doesn’t work, it doesn’t mean there aren’t other options and there isn’t hope, xi said.