King of the collapse 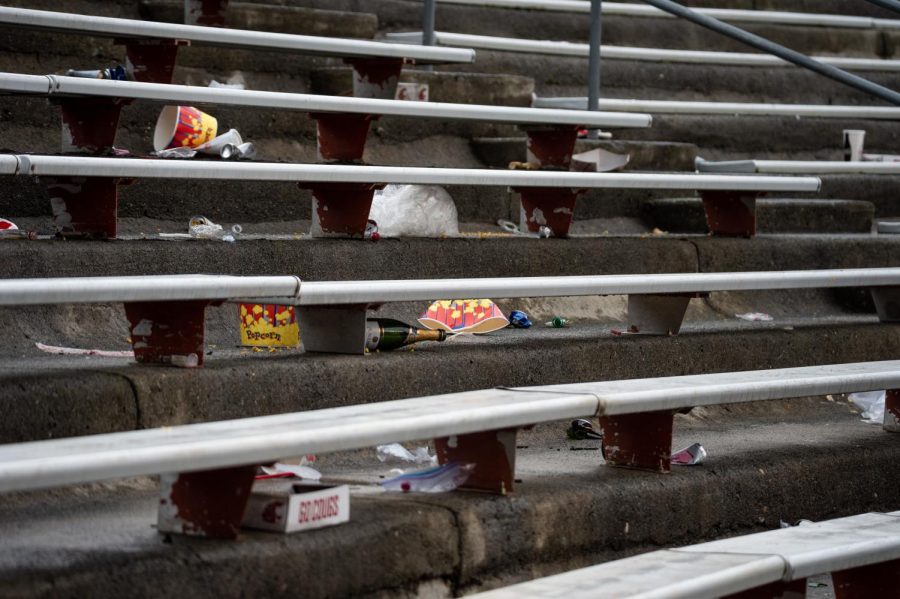 The WSU student section lies empty at the end of a college football game Sept. 18, 2021, in Pullman.

For as much as you can argue about WSU head coach Nick Rolovich, there is one thing for certain: the coach has embraced the Pullman tradition of “Couging it” more than any other coach in program history.

To “Coug” a game is a time-honored tradition of jumping out to a great start, giving your fans plenty of hope and then tossing it in the trash with an abysmal closing performance. Rolovich has been the king of this in his short time on the Palouse.

In Rolovich’s seven games at the helm of the Cougars, WSU has secured a double-digit lead on six occasions. Despite this, the coach is 2-5 as a WSU coach and 2-4 in those games where he has secured at least a 10-point lead.

Compare that to Rolovich’s predecessor, Mike Leach, and there are some stark differences. Leach coached 102 games at WSU with a 55-47 record. Leach’s Cougs took a 10-point lead on 54 occasions, a much lower percentage than what Rolovich has been capable of doing in his short time. However, when Leach took a double-digit lead, he almost always secured the win. In those 54 games, the Cougs went 44-10.

Those 10 losses for Leach were definitely not fun for WSU fans. The crown jewel of “Couging it” comes from those selections with the 2019 game against UCLA when the Cougs led 49-17 and lost 67-63.

Things happen. Teams choke and lose games they should win. It happened to Leach those 10 times in 102 games. It happens to the best of coaches.

But four times in seven games? That is pushing things a bit far.

This year’s Cougar football team is one of the most talented on the field that WSU fans have seen in years. Rolovich inherited an incredible roster and has done a decent job of filling it out some more.

For years, Rolovich did more with much less while coaching the football team at Hawaii. In fact, Rolovich had a near-perfect record in games where his team took a double-digit lead while he was in Honolulu. Of his 55 games in charge of the Rainbow Warriors, Rolovich’s squad claimed a 10-point lead on 21 occasions. They would go on to win 20 of those games.

Choking games away is a new phenomenon for the head coach. That could very well be because of the bigger stage and tougher opponents. The Utah State loss is inexcusable either way, but holding leads against USC, Oregon and Utah is a bit tougher than holding those same leads against the likes of Duquesne, Central Arkansas and Western Carolina.

The issue seems to be in managing leads. Rolovich does an amazing job of building these leads most of the time. His teams almost always come out of the gates hot and ready to play.

It is when the team comes out of the locker room after halftime that the issues arise. Rolovich does not seem to know how to coach with a lead and keep the momentum going.

During his time so far at WSU, Rolovich has gone to the locker room with a cumulative 32-point lead at the half. In six of seven games, the Cougs have led at the half.

The second half has been an entirely different story, with WSU being outscored by 92 total points. That works out to roughly a 13-point deficit in every second half of Rolovich’s tenure thus far.

Winning football games requires the coach to make adjustments on the fly. Rolovich has obviously struggled with this thus far. It seems he is best when he is first building a lead than when he is trying to sustain a lead. And that is not how you win football games.

Second-half adjustments are what make the truly great coaches great. Being able to see what the other team is doing and adjust to that is what wins your team’s football games. Right now, that is just not happening in Pullman.

WSU often looks lost in the second half, not knowing what to do against the new looks their opponent is throwing at them. It all boils down to the coaching.

With a tough road trip to Utah on the horizon, Rolovich better figure things out quickly and learn how to coach on the fly. The Utes have a very good team, meaning it is going to be tougher to jump out to that early lead.

Last season, when WSU closed out the season against Utah, the Cougs jumped out to a 28-7 halftime lead before losing 45-28. Rolovich and company will need to do much better this time around.