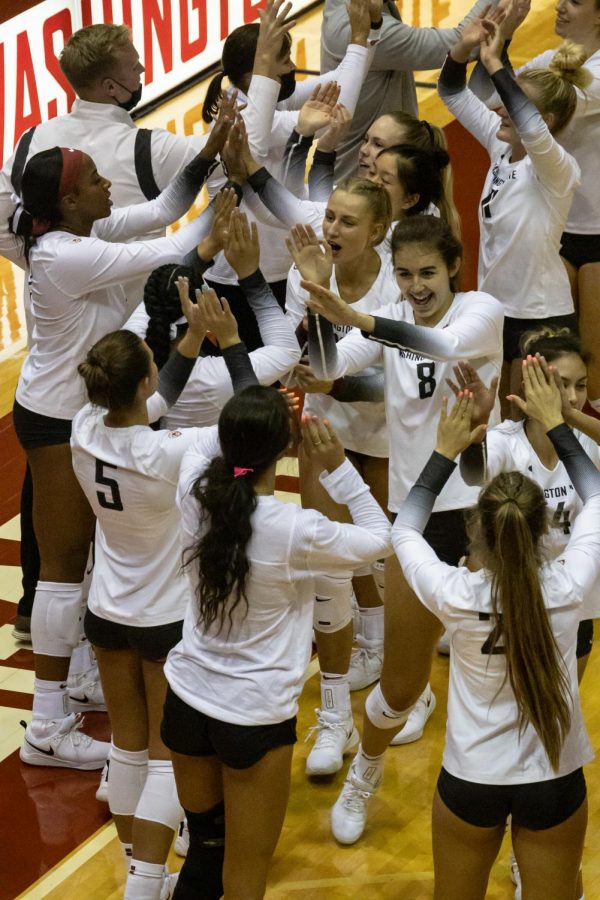 The Cougars celebrate a victory against Gonzaga on Sept. 10, 2021, inside Bohler Gym.

The Cougs proved to be perfect again in the Thunderdome Classic this last weekend as the WSU volleyball team swept all three of their matches. The Cougs traveled to Santa Barbra, California, to play Virginia Commonwealth University and UC Santa Barbara. WSU played UCSB twice during this tournament.

In the first match, WSU played UCSB. They continued their three-game win streak. On Friday morning, the first set started with the first eight of nine points going to the Cougs. Junior outside hitter Pia Timmer had an impressive offensive start with a career-high eight kills in one set.

UCSB did begin to have a little bit of a comeback. With the score being 22-19, the Cougs put up a strong offensive front with junior middle blocker Magda Jehlarova and redshirt junior Kalyah Williams. The Cougs won 25-21.

In the second set of the first match, the two teams battled it out for the first 15 points as each side traded serves and points. WSU did give themselves some breathing room as they went on a 6-0 scoring run. Junior defensive specialist Karly Basham also had a great serving performance to put the Cougs ahead.

With Basham behind the service line, UCSB had a number of errors that helped the Cougs gather some momentum and take the lead. The Cougs ultimately won the set 25-22.

In the third set, the Cougs were already up 2-0. The Cougs went on an 8-1 scoring lead with a couple of big offensive moves from Williams. The Cougs did not let up on the offensive attack and won the match 25-15.

The player of the match was Kalyah Williams all around had a great match. She had 12 kills which tied a career-best. She also had a hitting percentage of .579 and three blocks.

In their second match of the Thunderdome Classic against VCU, the Cougs dominated on both sides of the ball. Bashman and Jehlarova had a big presence in the middle of the court. WSU led 15-3 in the first set. WSU held VCU to a .000 hitting percentage. Jehlarova finished the set with seven blocks, as well as her impressive offensive performance.

In the second set, Timmer took the offensive lead and also led the Cougs to an early 8-4 advantage over VCU. The Rams looked to try and gain some momentum to try and put a stop to the Cougs. The Cougs then went on a 3-0 run that made the lead 16-10. The Cougs kept pulling away and won the second match 25-19. The Cougs also held VCU to a negative hitting percentage of -.024.

With the first two sets put away, the Cougs looked to sweep VCU in the third set. In this set, the Rams took an early lead. VCU forced the Cougs to work for the lead. The Cougs went on a 5-0 scoring lead, mostly steered by fifth-year outside hitter Penny Tusa. The Cougs were up 10-8. V

CU and WSU went on a back-and-forth battle for points until the momentum of WSU came out. The Cougs fought back to be within two of 25. Timmer and Tusa finished off the set with a pair of kills and the final score was 25-19. By the end of this match, the Cougs were on the path to yet another tournament title. This was also the fifth sweep in a row for the Cougs.

Jehlarova was named player of the match. She recorded 10 kills, had a hitting percentage of .412 and had seven blocks, which is a season-best for Jehlarova.

At the beginning of the third match, the second against UCSB, the Cougs took a quick lead as Williams had a massive performance from the middle. She recorded a couple of kills which put WSU on a 6-1 scoring run. After a massive scoring breakthrough, the Cougs had eight unanswered points to gain a 17-9 lead. The Cougs stopped UCSB from scoring any more points and finished the first set 25-9.

In the second set, WSU saw an impressive offensive performance from freshman opposite Katy Ryan. Ryan had nine kills in the first 12 points. WSU was ahead 10-4. Timmer also went on a little bit of a scoring run recording 10 kills in this one set. Timmer led the Cougs on a 8-0 scoring run as well. The Cougs had a big block that set up the set match. With the final score being 25-22, the momentum was in the Cougs court.

The third set was not exactly the best for the Cougs. UCSB went on an absolute attack against the Cougs. UCSB stopped the Cougs three-set sweep streak. UCSB forced WSU to eight errors. Timmer was also shut down for the set. UCSB outhit the Cougs .538 to -.034.

Forcing the Cougs into a fourth set, UCSB looked to take control of the match and have a comeback to win it. However, the WSU women had a different idea. After an early 5-0 run, UCSB came back for an 8-6 lead. Tusa gave the Cougs a big service ace that gave WSU that advantage 10-9 over UCSB. After another 5-0 run, junior defensive specialist Julia Norville stayed behind the service line and the Cougs led 19-14. WSU ended up winning the fourth set and the match 25-21.

WSU also won the Thunderdome Classic title with their performance.

Timmer was named player of the match with a career-high of 19 kills, 10 of those in one set alone. She also had nine digs. This tournament would also give Timmer her second MVP award of the tournament season. On Monday, the Pac-12 named Timmer the conference’s Offensive Player of the Week. She is the first Coug to win the offensive award since Tusa did in 2018.

The Cougs are coming back home this week, as WSU plays at 6 p.m. Wednesday at Bohler Gym against the Colorado Buffaloes.