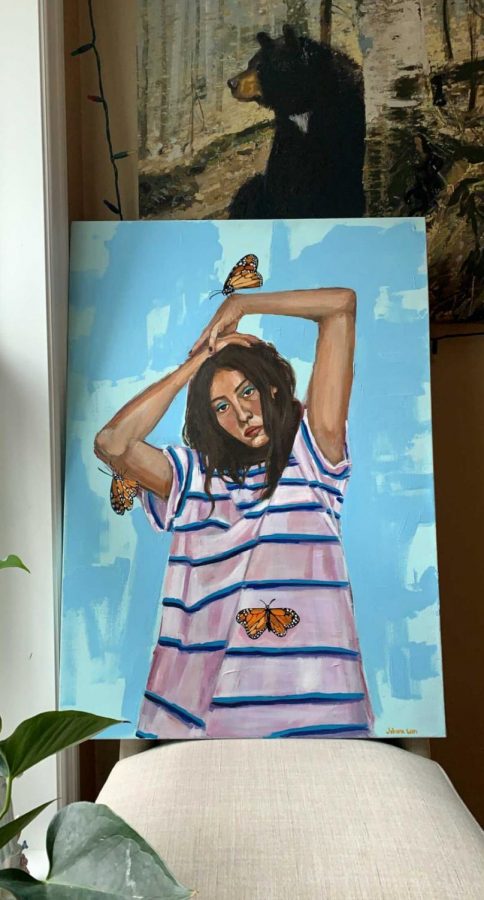 Jobana Leon enjoys painting photos of people with additions of butterflies and flowers.

One WSU alumna transformed her anxiety and frustration from the pandemic into breathtaking pieces of art.

Jobana Leon, class of 2021 graduate, said she began doing art in middle school, eventually leading her to find a passion for drawing and painting in high school. The creative freedom from her art teachers provided her with a safe space to produce the work she enjoyed.

“I’ve always loved making art and it didn’t necessarily mean painting. Like, I like drawing or just doing anything creative,” Leon said.

Leon said she loves both drawing and painting, but finds painting to be better, even though she thinks it is more of a hassle. In high school, Leon painted a piece titled “Untitled” that was published in LandEscapes, WSU’s literary arts journal.

“It’s just really nice to kind of feel like your work is appreciated or like shown because, like you know you spend so much time on it,” she said.

Leon said she is always a little reluctant to show her artwork to people outside her close circle, but being published in the magazine was very exciting for her.

“Some of [the art is] so personal to her, she’s not even willing to show it to the public,” Leon’s friend Osman Lopez said. “I asked her about a few of these works that she was proud of, and she was still embarrassed to show me, even though I’ve known her for a couple years now.”

Leon’s published piece was inspired by artist Agnes Cecile. The piece required a lot of experience in facial expressions, which Leon said she had been trying to practice.

Leon said she tried to make the face look like Leonardo DiCaprio crying in a scene from the movie “The Basketball Diaries.”

“I was very taken aback by it, and like, I just wanted to paint that, and so I did,” she said. “When I painted it, it was just mostly because I was always really quiet, and I still am very anxious and hard on myself. It was just kind of a way for me to scream and just like let it out.”

Leon said she experienced a lot of anxiety and stress in 2020. Painting was one of her biggest stress relievers and one of the best ways for her to express her emotions.

One of the things which made her the most upset was her graduation being held virtually. She said she was frustrated because it took her five years to graduate from college and it all ended unceremoniously.

Depression and anxiety are two things that have affected Leon thoughout her life, and she said she believes that expressing them through art is important.

“It’s not something that I talk about a lot, or I feel like I shouldn’t talk about, and I feel like I also shouldn’t feel that way,” she said. “I feel these things, but sometimes I have a hard time saying it, but like this is it basically in this painting.”

Besides her published painting, Leon said she enjoys painting people and flowers.  She said she gets her inspiration from Tumblr, random photographs or from videos she sees online. She also enjoys painting butterflies from time to time.

“She just recently did an artwork on a trip that she did I think about a year ago, in December when she was in Mexico,” Lopez said. “It brought back memories to me as well because I haven’t been there in years, and just looking at the outlines and the colors, it all kind of brought back memories.”