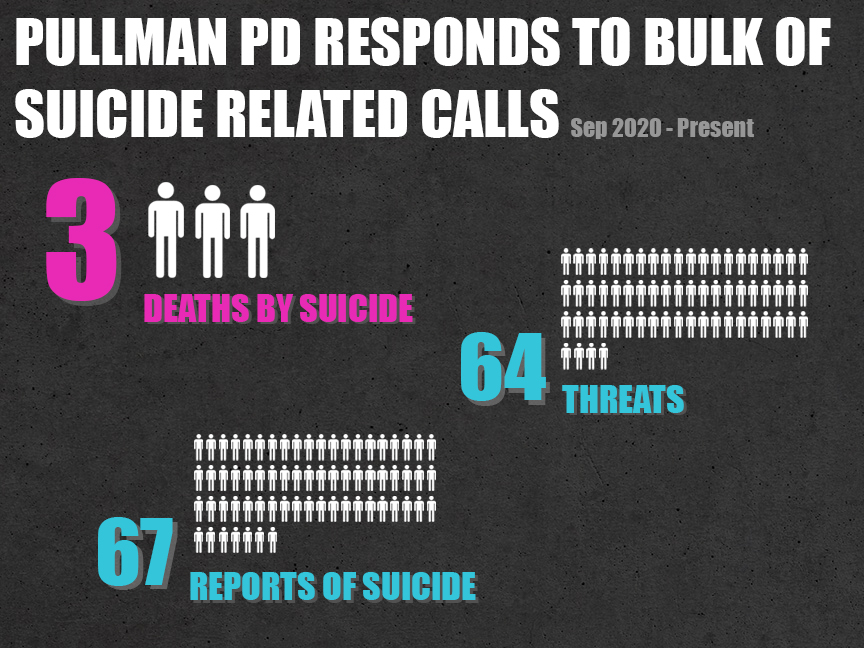 From September 2020-21, Pullman PD responded to 67 suicide-related reports, three of which resulted in death. WSU PD expereienced fewer reports than Pullman PD because of a lack of students on campus.

Jake Opgenorth, Pullman PD Operations Cmdr., said three reports relating to suicide resulted in death, while 64 other reports were people reaching out for help and people worried about friends or family.

When Pullman PD receives a call relating to suicide, an officer assesses the situation and offers different resources, such as driving the person to the hospital or referring them to counseling services, Opgenorth said.

“Bottom line is we want to help and it’s not a crime,” he said. “Our ability to help is pretty limited, but if we’re able to make contact with somebody and they want help, we facilitate that.”

The past year was less busy for WSU PD in terms of suicidal reports because very few students were on campus. WSU PD has a few options when approaching a situation related to suicide, Jacobson said.

“Our first concern is getting help for the person,” he said.

If the person calling in is a serious danger to themselves, WSU PD takes them into protective custody and to the hospital, Jacobson said. The majority of calls usually consist of trying to convince the person to voluntarily meet with a psychologist at the hospital.

After talking with a psychologist, the person’s needs are assessed, he said. The person may need immediate help or a referral to Counseling and Psychological Services at Cougar Health Services.

Jacobson said having a close group of friends who look out for each other plays a big part in reducing suicidal thoughts.

“We’re Cougars, we’re a family,” he said. “It’s like looking out for another family member if they’re feeling withdrawn.”

Opgenorth said not reaching out for help when depressed worsens the situation at hand.

“There’s a stigma associated with it, and people don’t reach out for help … but there’s all kinds of resources,” he said. “It’s okay to call somebody else to get help.”

Opgenorth said when someone is afraid to come forward about suicidal thoughts, they may express themselves in other ways, such as through a shift in lifestyles.

“Just pay attention, don’t ignore it,” he said. “Take it seriously and help the person one way or another.”

There are multiple resources in Pullman for people considering suicide, though there is always room for improvement. Openorth said community members can access Palouse River Counseling, crisis lines and more for mental health care. Students also have access to CHS.

The Whitman County Suicide Prevention and Resiliency Task Force tries to bring awareness to the topic of suicide. The organization is focused on spreading the word to others within the community through a series of programs and education, he said.

Jacobson said WSU’s Student Care Network allows students to submit a care request, either for themselves or another person. Based on the information provided by the student, the network figures out the best resources for the student.

“Everyone’s different, but we just want to help in any way we can,” Opgenorth said.