Safety director turns attention to emergency blue lights project; senators will be required to author one resolution per semester 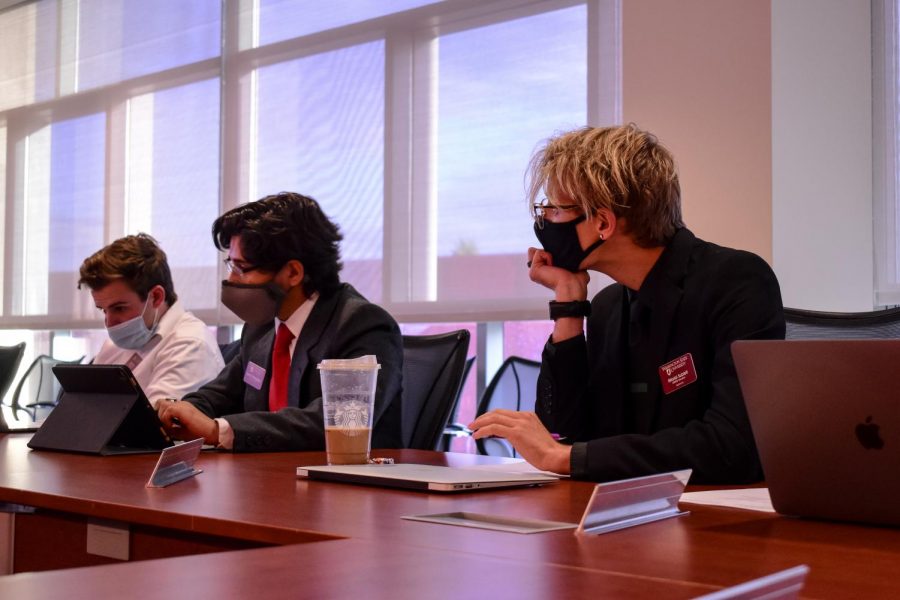 All-Campus Senator Nikolai Sublett listens to a resolution that would require senators to work on one resolution or two bylaws during an ASWSU meeting Wednesday evening in the Compton Union Building.

ASWSU voted Wednesday night to require senators to work on one resolution or two bylaws each semester and discussed campus safety resources.

Pro Tempore Katie Carstens, who authored the change, said she intends to encourage senators to get involved and start making changes. The resolution also requires resolutions to be sponsored by another senator to promote open communication.

ASWSU Safety Director Nuthaphol “Cody” Ongpituk said he is working to build a stronger relationship with Cougar Health Services. He is hoping to complete the emergency blue lights project so the responsibility no longer falls on ASWSU.

Ongpituk is also working to create a health and safety committee and increase the promotion of campus resources to students.

All-Campus Senator Nikolai Sublett said his overarching goal this year is to prevent sexual assault on campus. Sublett’s resolution to provide accessible emergency contraceptives was recently sent to the rules council. Sublett said he is hopeful the project will be completed shortly.

Sublett said after this resolution is completed he is planning to turn his attention toward adding more emergency blue lights and crosswalks to campus.

WSU President Kirk Schulz said during a meeting with ASWSU Vice President Alexander Pan and ASWSU President Brian Patrick that he has no intention of returning to online classes, Pan said.

Schulz told them the in-person experience is too beneficial to students to move back to a virtual system, Pan said.

Pan also spoke with university officials about the possibility of introducing payment plans for students. Pan said they should be implemented in one to two years.

The university discussed demolishing several buildings on campus, Pan said. The funds for these projects would not come from student tuition.