Moose can be dangerous when threatened; people with dogs should maintain distance 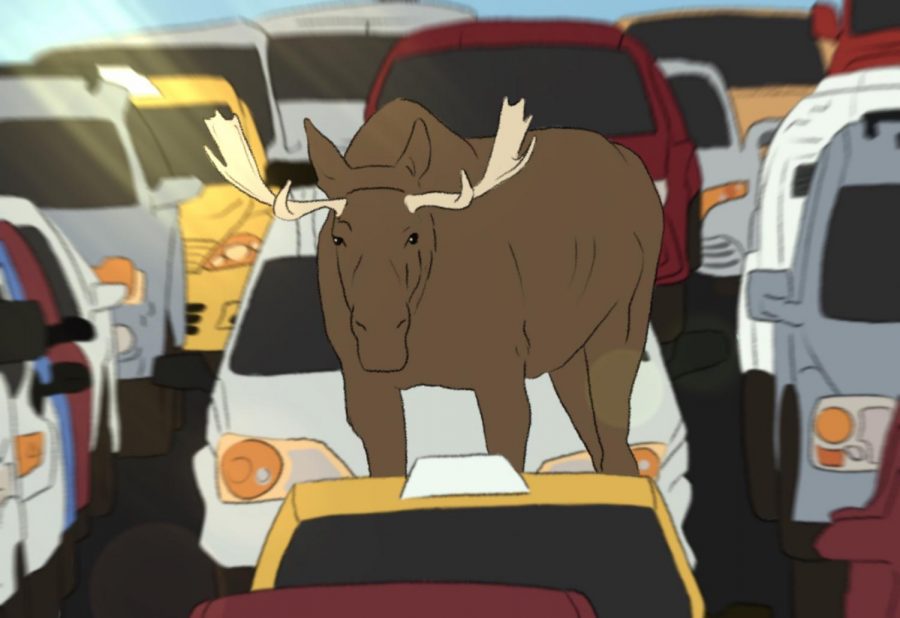 Several moose have been spotted in Pullman this year. Wildlife officers caution people to maintain their distance if they encounter a moose.

WSU students were all over the moose on the loose that came to town recently and even voted in an Instagram poll to name it Moox Borgi.

The moose was in town for about six days, said Grant Silver, Washington Department of Fish and Wildlife officer. Normally, moose will find their way out of town after three days, but this moose took extra time.

Elizabeth Oje, Pullman Police Department senior code enforcement officer, said when the police department receives a call about an animal passing through town, they will monitor it and make sure it is not in a school zone or a traffic hazard.

“Typically, you leave them to themselves. They’ll just end up going through town and kind of leaving, as opposed to sticking around for a week,” Oje said.

Pullman PD kept an eye on the moose while it was in town and kept WDFW updated on the situation, she said.

The police department wanted to see if the moose was threatening people or other animals and watched to see if it was headed in a certain direction, she said.

“We gave it some time … [but] it seemed pretty clear it wasn’t going to go anywhere,” Silver said. “That’s when we make the decision for public safety reasons to tranquilize it and relocate it out of town.”

The moose was relocated about an hour and a half outside of town, he said.

Silver said WDFW has had to relocate two moose in Pullman this year; there have been two other moose that found their way into town and left on their own.

“This year has been a really high frequency of moose encounters,” he said. “Last year we didn’t have very many, then the year before, that was quite a few again. So it just fluctuates year to year.”

Silver said moose can be very dangerous and will get aggressive when they feel threatened or harassed.

Oje said since a lot of students are not used to wildlife on the loose, they need to be aware of the dangers when they encounter them.

“It’s human nature to be curious and want to see close because it’s something you never get to see, but what I would advise is you stay further away and zoom in with your camera,” she said.

Moose are not fearful and are comfortable with taking on anything, Oje said. People do not know the stress level of the moose when they run into one. The moose might not be afraid of people, and nobody knows what it could do.

Wolves are the only predator to moose, and dogs represent wolves sometimes, she said. If someone comes across a moose while walking their dog, they should get as far away from the moose as possible.

“It’s always safer not to approach, just because of those incidents where people don’t come out on top,” she said.