Turtle may have to stay through winter; vets treated him with pain medication, antibiotics 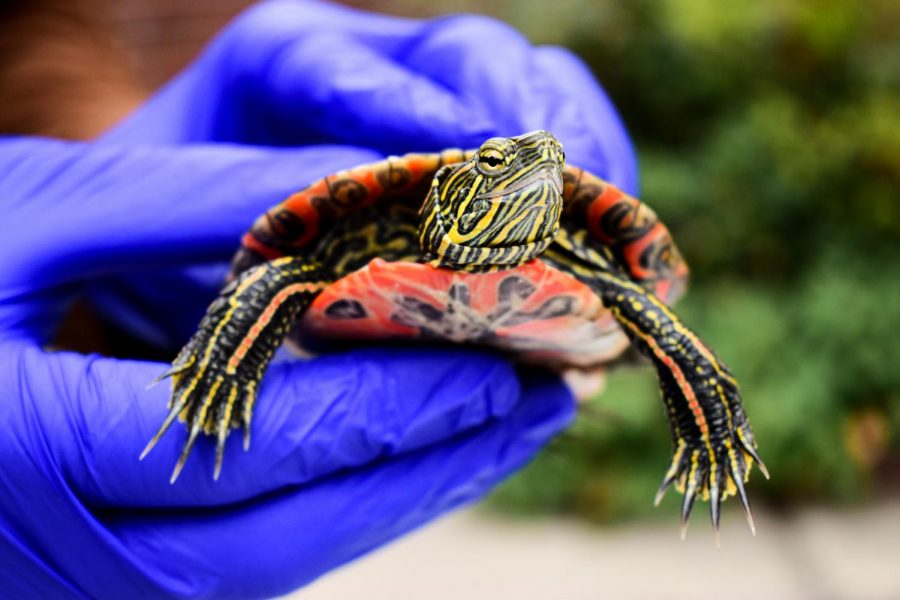 Wildlife veterinarians at WSU’s Veterinary Teaching Hospital are helping a Western painted turtle recover from an animal attack that tore through its shell and soft tissue.

A good Samaritan found the turtle about 4 hours north of WSU and brought it to the hospital, said veterinary intern Dr. John Winter.

“Since then, we’ve basically been watching the new skin form over the muscle that was exposed,” he said. “Eventually new bone will come in where the shell fracture is … it takes a long, long time because turtles do everything very slowly.”

Winter said vets weaned the turtle off medication. He gets daily baths and spends several hours in UV light to simulate his natural environment.

Turtles are fairly hardy animals, Winter said. This turtle has old shell wounds that seem to have healed.

“They’re nibbled on a little bit here and there, and then they just go about their day and heal after that,” he said. “This damage was just a little more severe.”

The vets are trying to decide if they should release the turtle now or wait until after winter, he said. They cannot release the animal during winter because turtles enter a slowed metabolic state called brumation, which is similar to hibernation for cold-blooded animals.

If the turtle stays at the hospital for the winter, he will get a more permanent tank, Winter said. He will be reevaluated for his ability to move around, swim and forage before being released into the wild.

The Veterinary Teaching Hospital is one of the only licensed wildlife rehabilitators in Eastern Washington, meaning people travel hours to bring in injured or orphaned wildlife, Winter said.

Western painted turtles are one of only two turtle species that are native to Washington state, according to the Washington Department of Fish and Wildlife website. They have yellow stripes on the head and undersides with bright red markings.

Winter said this turtle is probably about 2 to 5 years old. Western painted turtles can live 35 to 40 years in captivity.

The hospital does not name wildlife because they are not pets, Winter said. Vets refer to this turtle as “Ben,” the name of his finder.