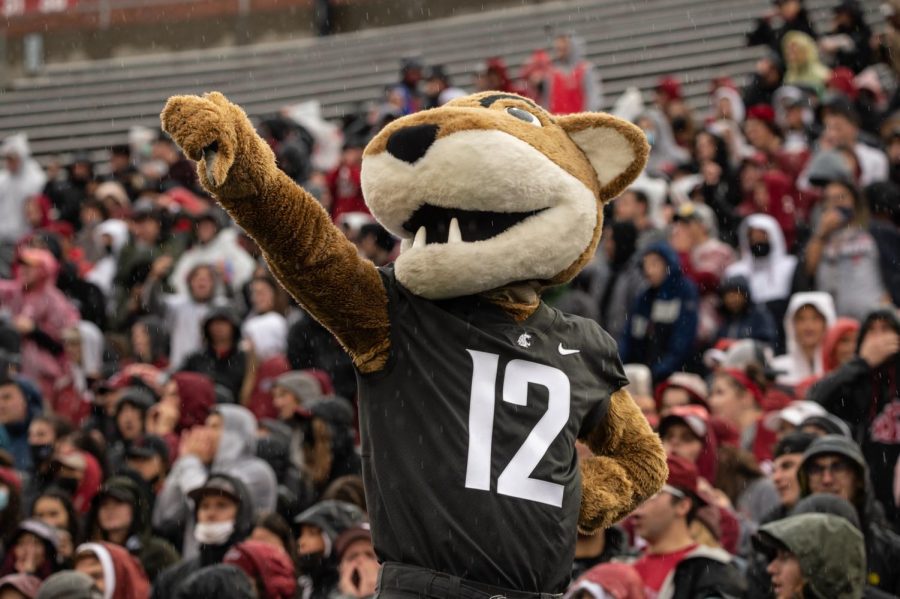 Butch T. Cougar gives a thumbs down during a college football game Sept. 18, 2021, in Pullman.

WSU football added another loss to its record this Saturday, losing 24-13 against Utah.

Jarrett Guarantano got the starting quarterback job for the Cougs. The start this weekend was Guarantano’s first appearance since week one against Utah State.

Normal starting quarterback Jayden de Laura did not dress Saturday, presumed to still be recovering from an injury in the previous week against USC.

A field goal in the second quarter from Dean Janikowski put the Cougars on the board first, 3-0.

However, WSU running back Max Borghi was injured during this drive on a run play. After being tackled, Borghi nursed his wrist while walking to the sideline. Borghi would later be seen after half coming out of the locker room in street clothes.

Deon McIntosh became WSU’s main running back after Borghi’s injury, rushing for 59 yards in the game.

The Utes offense answered back by taking the lead 7-3 thanks to a touchdown run by freshman quarterback Ja’Quinden Jackson. Jackson’s touchdown run was only his second in-game snap at Utah.

Struggling to reach the end zone, the Cougars would then kick another field goal, making the game 6-7. The score would remain there going into halftime.

The second half began with the Utes on offense. On the first offensive play, WSU’s Ron Stone Jr. forced a fumble out of running back Micah Bernard’s hands. WSU’s Christian Mejia recovered the ball, prompting Guarantano and the offense to come back onto the field.

“R.J. [Ron Stone Jr.] is a big part of not only our defense but of our team because of who he is as a person,” WSU head coach Nick Rolovich said. “There is no surprise that he has success with the way he works day in and day out. A wonderful member of this team and a wonderful person in this world.”

The Cougars were able to capitalize on the great defensive play by Stone Jr. and Mejia, showcased by a 26-yard touchdown pass from Guarantano to De’Zhaun Stribling. The touchdown marked Guarantano’s first as a Cougar. A made extra point attempt gave the Cougs a six-point lead over the Utes 13-7. This would mark the last time the Cougars scored in the game.

The Utes took control after the only WSU touchdown of the game. Quarterback Cameron Rising and running back T.J. Pledger marched down the field on the next drive. The Utes were forced to settle for a field goal on the drive, making the game 10-13.

The Utes also intercepted a throw from Guarantano later in the third quarter, bringing Guarantano’s interception total to two.

Right after the interception, the Cougar defense forced a fumble again, this time forced by Travion Brown and recovered by Jaylen Watson. Nothing would come from the impressive defensive play of the Cougs however, ending the third quarter 13-10.

The Utes continued to pressure the WSU offense in the fourth quarter, forcing the Cougs to punt twice in the quarter.

Pledger found success running the ball against the WSU defense, putting the Utes ahead 17-13. Pledger was a large part of the Utes’ offensive success, responsible for 117 yards and one touchdown.

The Utes added some insurance points with an interception returned for a 54-yard touchdown by Clark Phillips III, making the game 24-13. WSU then accepted defeat, putting in backup quarterback Cammon Cooper for some reps in garbage time.

“We need to take a hard look at ourselves,” Rolovich said. “Six points in the half and 13 points total is not good enough and that’s not why we’re here.”

The WSU defense gave the offense a chance to win against the Utes, causing a total of six fumbles and recovering three. Utah’s defense was the deciding factor in the game, shutting down the Cougar offense.

Ranked first in the Pac-12 three years in a row, the Utah defense proved against WSU that they are still in contention this year. The Utes defense was responsible for eight sacks, 13 tackles-for-loss, and three interceptions.

“We got closer this week to finishing out a game, but it’s just not where we wanted it to be yet,” Stone Jr. said. “We’re going to keep focusing and bring the intent to finish all four quarters of the game.”

The game ended 24-13 with WSU adding another loss to the record, now 1-3 and 0-2 in conference play. The Cougs look to end their two-game losing streak next Saturday in Berkeley, California, taking on the California Golden Bears.