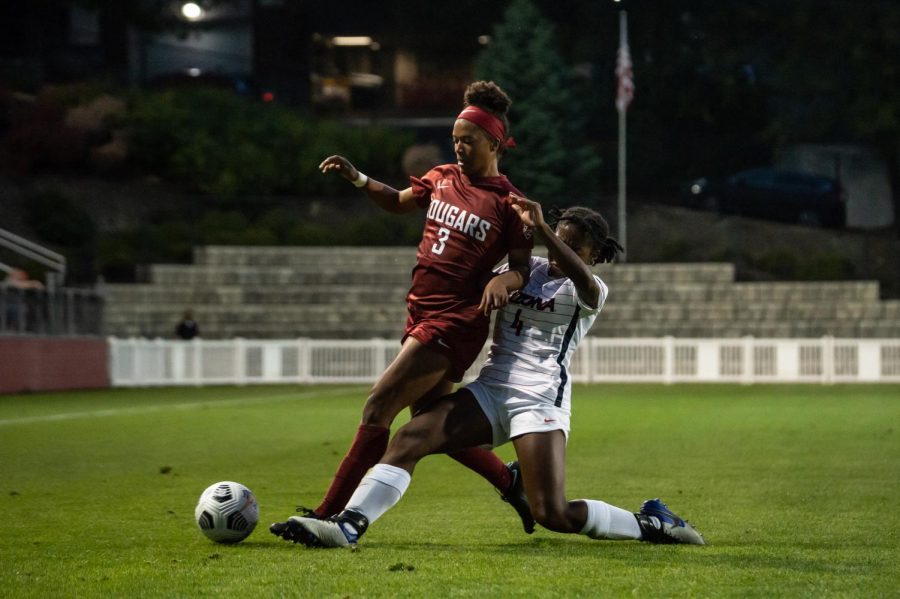 WSU forward Enzi Broussard battles Arizona defender Jasmine Young for the ball during the second half of a match Sept. 24, 2021, in Pullman.

On Friday, 823 people packed into the Lower Soccer Field for WSU’s first Pac-12 soccer match of the season against Arizona. The match ended in a resounding 2-0 victory for the Cougars. With the win, the Cougs improved to 7-1-1 overall, 1-0-0 in conference matches and 16-9-1 all-time against Arizona.

“It was huge,” fifth-year forward Elyse Bennett said about the victory. “I think every game, we take it one game at a time. So this was a huge step for us to start Pac-12s. And we are only looking to go up from here.”

Arizona redshirt senior forward Jill Aguilera tried to find the back of the net eight minutes into the game, but the shot went wide. Bennett quickly rebounded and attempted two shots for the Cougars but both were blocked.

Finally, 12 minutes into the game, junior forward Enzi Broussard, assisted by fifth-year midfielder Sydney Pulver, scored the first goal of the night for the Cougars.

Wildcat freshman forward Marley Chappel attempted the next shot, but it went wide. The Cougars regained control of the ball and attempted four shots but none hit the net.

After that, the Wildcats seized the ball and attempted two more shots before the end of the period.

In the second half of the game, it took time for action to heat up. Forty-seven minutes into the game, Wildcat sophomore forward Nicole Dallin attempted the first shot of the second period, but the ball went wide.

Arizona received three fouls and sophomore defender Jasmine Young received a yellow card in the next five minutes of the game. Junior Cougar midfielder MacKenzie Frimpong-Ellertson took a shot 49 minutes into the game, which went wide.

Bennett attempted another shot for the Cougars which was blocked, but she quickly rebounded and scored a goal three minutes later. She was assisted by senior defender Mykiaa Minniss.

The goal marked Bennett’s sixth of the season, retaking the team lead for goals this season and tying for eighth all-time in goals scored with 22 career goals.

“I just chased the ball down,” Bennett said. “I have been practicing that all week cutting inside on my right foot and hitting it far post. So I just hit it and I was blessed to be able to get it over the goalie”

The rest of the match saw shots attempted both by the Cougars and the Wildcats but neither team scored. The match marked Pulver solidifying her place in the record books by becoming tied with Ali Fenter for all-time matches played for WSU.

The Cougars have now outscored their opponents 26-3 this year.