Despite dropping historic fourth set, WSU picks up win over No. 6 Washington 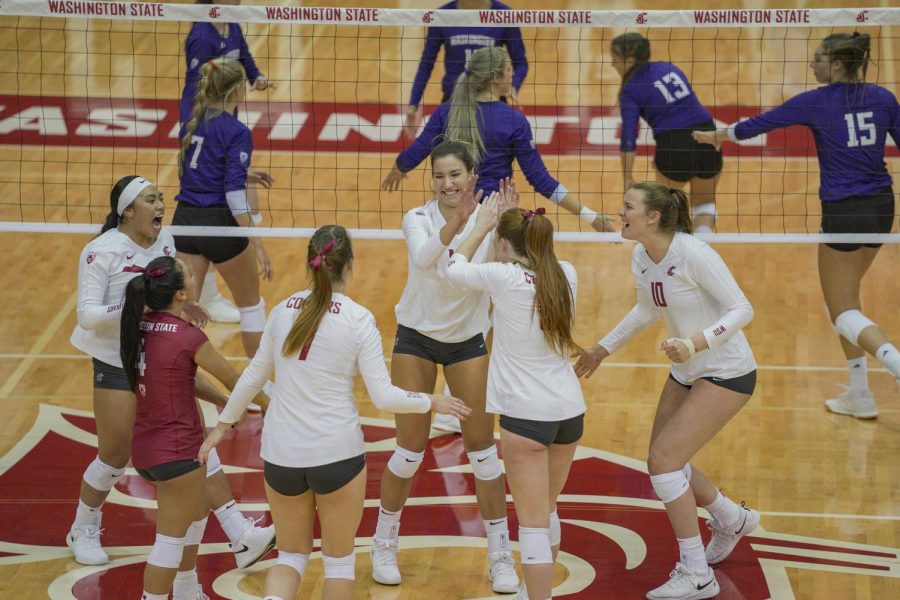 The women's volleyball team celebrates during a match against the University of Washington on Sept. 25, 2019, at Bohler Gym.

After a rough start to the season, the WSU volleyball team has made their early-season turnaround. After knocking off No. 24 Colorado, WSU faced its biggest challenge: its cross-state rival, the Washington Huskies.

Coming into the match, Washington was ranked No. 6 in the AVCA coaches poll. The Cougs had not been ranked since their early season tournament when they lost.

With a packed Bohler Gym, the Cougs and Huskies were ready to battle it out on the court to see who would win the first Apple Cup meeting of the year.

The Cougs tried to battle to win the set. The set was tied 19-19 after Ryan put down back-to-back kills putting WSU in control to potentially win the set. WSU unfortunately was not able to come back after Washington had three straight points to put the set away.

With the match even at one set each, the Cougs needed to get back on track to keep up the momentum of the first set. WSU had an early breakout with several kills and points. The Cougs continued to block the Huskies and put on a 10-3 scoring run. Washington would not be able to recover from this gap which continued to grow.

With an electric Bohler Gym, the Cougs led 2-1 going into what would be the historic fourth set. The two sides were not leaving anything on the court during this set. The Cougs jumped out to an early 11-6 lead. The Huskies came back on an 8-1 scoring run. The Cougs were not ready to give up this set yet.

The Cougs and Huskies battled back and forth, each team keeping the other within a point or two. Trailing 24-23 the Cougs fought up the first of 11 set points. Timmer hammered down a big kill for the Cougs evening the score up 24-24. The set was 28-27 after Timmer and the Cougs pushed their way back from what seemed to be a corner that the Huskies had put them in.

The Cougs and Huskies continued to battle it out. However, each side was starting to feel the pressure and wear of the match. Washington had several errors on their side of the court and the Cougs missed several serves.

These mistakes ended up being costly for the Cougs. After 30 tied scores and 12 setpoint opportunities for the Cougs, the women came up short and ended up losing the set 46-44. This would be tied for the longest set in NCAA women’s volleyball history. Washington tied the match up 2-2 forcing a fifth set.

In the fifth set, both sides were trying to ride the momentum from the epic fourth set. The Huskies came out scoring early with four points which looked to put WSU on their heels. The Cougs fought back with a couple of kills from Timmer of off-sets from redshirt junior Hannah Pukis.

Timmer also led the Cougs with back-to-back service aces which tied the match up 5-5. WSU pushed their lead to 9-6, a very important three-point advantage. The Huskies tried to climb back for the lead, but it was too late. The Cougs led 13-11 and after a couple of big kills from Jehlarova and Timmer, the Cougs put the match away 15-11, beating the No. 6 team in the country.

Timmer was named player of the match after her impressive 31 kills and 76 swings on the day. The junior hit an extremely impressive .303. Timmer was the top defensive player on the day, she had 21 digs, a career-best and seven blocks. Timmer also recorded four aces which is also a career-high.

WSU continues to show itself to be a powerful force on the court in the division-I NCAA world.

The Cougs look to keep this momentum going as they take on the Trojans of the USC Friday in Pullman. This should be another exciting match for WSU, as they march their way through the Pac-12 and hopefully to the NCAA Tournament.