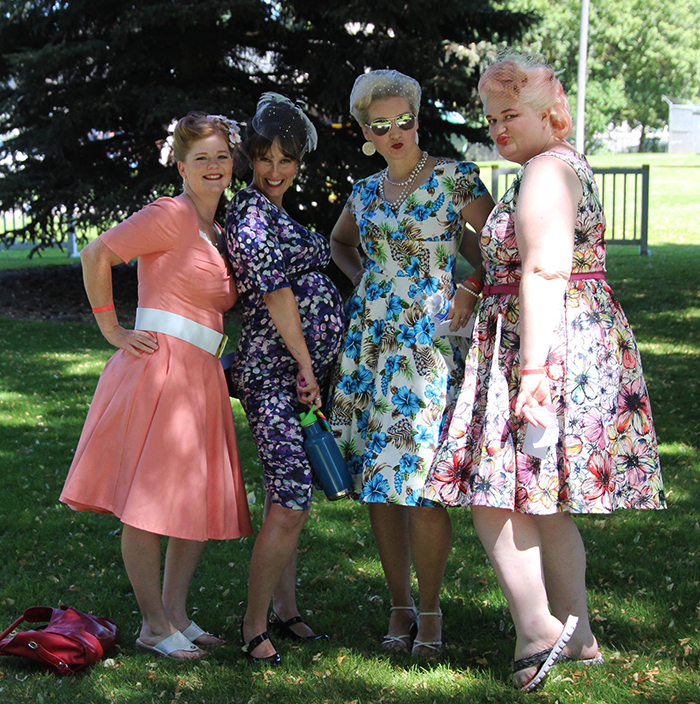 The acapella group Effie and the Echoes posing at the Palouse Music Festival in 2016.

every year, ranging from Americana to rhythm and blues.

Paul Smith, musician and Palouse Arts Council member, helped take over the arts council with his wife as the festival expanded from having only bluegrass in 2012. He wanted all the musicians to have some local connection to the area.

“We have a crowd who loves doing stuff in this town, and everyone does a part in it, and it is pretty cool,” Smith said. “You talk to anyone from the Palouse, and we all get giddy about our town.”

It started as a way to bring business to the Palouse and it turned out very successful, Smith said.

Smith is in a band called the Purple Teeth. The quartette’s style of music is eclectic acoustic and will perform at the festival, he said.

“When we first started, we had to cast our net wide,” Smith said, “and as you do something like this for years, you discover, at least here, there are all these talented musicians.”

The festival kicks off with Arman Bohn, who plays contemporary experimental music. He played with the band Death Cab for Cutie, which started in Bellingham.

Marie Dymkoski, Palouse Music Festival director, began helping with the festival as a volunteer at the Palouse Community Center, and she is now in her fifth year as director.

“We try to find new bands or musicians or rotate them each year so it’s always fresh and different in that regard,” Dymkoski said.

There will be food vendors, a beer garden and other arts and crafts vendors during the event, she said.

Anneliese Zook, Palouse native and singer, had an acapella group called Effie and the Echoes with four other women who performed at this festival for the past two years, but this year, the group is not performing.

Zook said she is impressed by how each of the seven bands is very different from each other and no two genres are alike.

“It is interesting how they set it up. It seems like the first two bands are a little more mellow,” Zook said, “but as you get further in the day, it gets louder and a little more ruckus.”

Smith said he hears a new style of music every year and this year, the festival is ending with the R&B band Heather and the Soul Motions.

“We do something at the end where people can kind of shake it to,” Smith said.