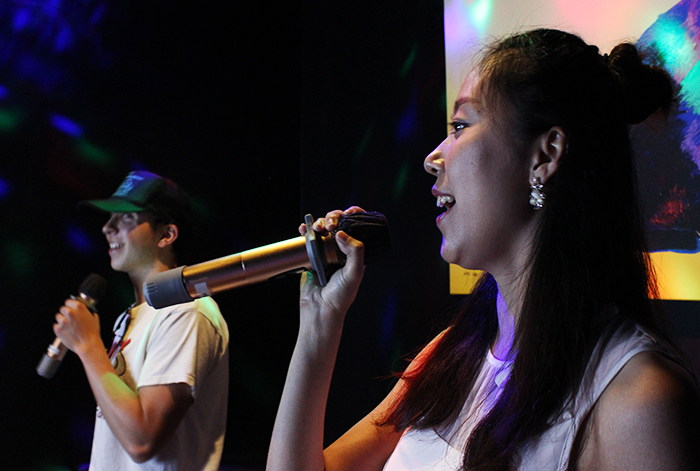 Many people cringe at the thought of singing in front of crowds of unfamiliar faces, but the owners of Star Sing Karaoke understand people may be intimidated at first, which is why they designed their business with private rooms.

With 12 sound-proof rooms and four room sizes, customers can choose who they want to sing their hearts out in front of.

The husband and wife business co-owners, Eric Lang and Coral Li said they both enjoyed doing karaoke when they lived in China because it is a major part of their culture. They made time for it at least once a week, so they are familiar with what makes a high-quality karaoke bar.

“This kind of business in China is designed [to be] very luxury,” Li said. “Because this is a college town, we want this one to be modern, young, fun and not that luxury.”

The whole construction process took over six months, and Li worked with a local designer to decorate the venue primarily yellow and black to keep the look simple, she said.

Each room has a surround sound system, a big screen TV and over 300,000 songs in multiple languages like English, Chinese and Spanish. If a song is missing, then customers can connect their phone to the TV and play YouTube videos, Lang said.

“You have no idea when you step into this place, people get shocked, [and] they really love it,” Lang said. “They start with one hour but they spend another and another. This kind of thing is inspiration to us. This means our business found the right target.”

Each room has the option of low lighting or disco lights to go along with the beat of the music. Giant watercolor art pieces made by the same artist tie the rooms together into one theme.

“I really like to see that everyone can have fun here, not just the students,” Li said. “Some professors also come here, too, and even a five-year-old girl has fun here. That’s what I really enjoy.”

Star Sing serves a variety of drinks imported from Asia, and when customers want a drink delivered or request additional service, there’s a call button to press in the room. They also have a bar where people of age can purchase beer, Li said.

“More and more international students are coming here and so I think that’s another thing that to me means that Pullman is trying to expand on businesses,” Lang said. “We see the trend and we just want to be part of that and also serve all kinds of locals.”

Prices vary depending on room size, time of day and day of the week. Small rooms host up to six people, medium rooms serve 10 people, large rooms accommodate 15 people and VIP rooms serve 25 people. Star Sing Karaoke is open from 1 p.m. to 2 a.m. every day and is located on Grand Avenue.