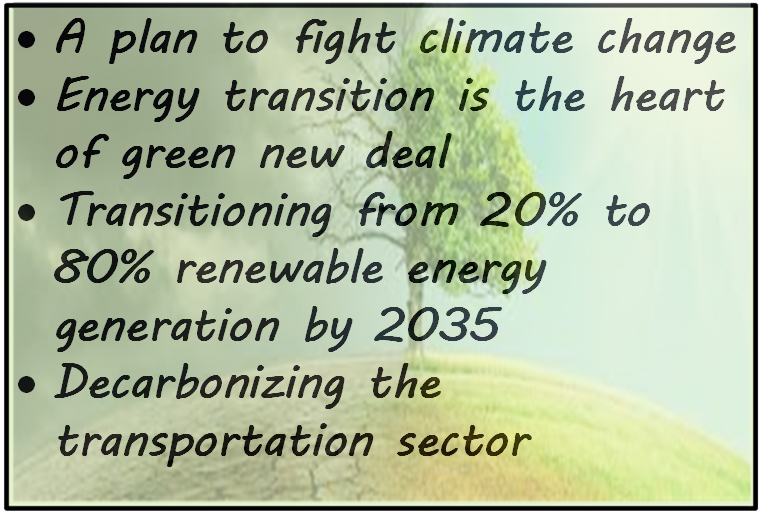 We will only obtain a truly green world when we change the very nature of the electricity grid.

When America experienced its first “hottest year” in January 2007, Thomas Friedman, American political commentator and author, first used the term Green New Deal (GND). The use of this phrase was the first step toward accepting there would not be an easy solution to climate change as politicians promised.

As many feared, there have been five “hottest years” since, with a growing number of natural disasters and fewer natural resources every year.

The GND was going to take a lot of money, rigorous and conscious efforts, and a pointed end to an entire energy industry — these have always been influential in political campaigns.

Since then, the term Green New Deal has referred to various sets of policies to help fight global climate change impacts.

For the first time in 2019, Rep. Alexandria Ocasio-Cortez and Sen. Ed Markey put together a 14-page resolution that lays down the goals and principles to tackling global climate change and called it the Green New Deal.

The major goal of the GND is to “bring U.S. greenhouse gas emissions down to net-zero and meet 100 percent of power demand in the country through clean, renewable and zero-emission energy sources by 2030,” according to this resolution. Net-zero refers to the balance between the amount of greenhouse gas produced and the amount removed from the atmosphere.

The U.S. is a historically-disproportionate contributor to greenhouse gas emissions per capita according to the World Bank data. We are also the most technicologically advanced country in the world.

As leaders in both of these fields, we should lead the efforts to reduce the greenhouse gas emissions and bring clean energy transitions to the power grid, according to the resolution.

The GND, although primarily focused on creating systemic policies for energy transition, also focuses on other aspects such as:

The overarching goal of the GND is to create a sustainable environment and community resilience.

After the 2020 presidential elections, the GND is still not endorsed by the government in its entirety. Instead, the Biden administration is working on “a clean energy revolution” that is cheaper and on a less ambitious timeline.

The GND is estimated to cost about $93 trillion to implement. However, President Biden’s plan is expecting an investment of $17 trillion from the federal government and approximately $5 trillion from private sectors.

But can we really afford to tackle a global threat in a relaxed timeline at a reduced cost?

Global emissions need to go to zero by 2050 to stop global temperatures from rising beyond 1.5 degrees Celsius — the target aimed in the 2015 Paris Agreement.

Over the past decade, the federal government has spent $350 billion due to extreme weather and fire events, according to a 2017 report by the U.S. Government Accountability Office. This is only going to get worse if we do not act on current climate change impacts.

Why is the government concerned about the cost when the problem at hand is the very existence of society?

The federal government can spend money on public priorities without raising revenue, and it will not wreck the nation’s economy to do so.

Transitioning from 20 percent renewable electricity production in the U.S. to 80 percent is going to involve a high-level coordination effort from the federal and state governments, research institutions and private sectors in addition to the trillions of dollars of investment.

As of August 2019, the Biden administration is still negotiating to pass a bipartisan package allocating $100 billion in energy transitions. The goal of this bill is to decarbonize the U.S. electricity system by 2035.

Power system operators suggest a lot more of the grid needs to be fulfilled before realizing these goals is possible. They estimate that, with the current plans in place, the bills would cut emissions by only 45 percent by 2030.

It is time to modernize our grid with clean energy generations and make our environment sustainable, given we do not have much time left in our hands to contain global warming effects.

We should listen to experts on how to make this transition possible and sustainable without financial pressure.

The U.S. government seems to never run out of dollars, but humanity can run out of limited global resources. The climate crisis fundamentally threatens those resources and the very livelihoods that depend on them.

The U.S. government must, without question, pass this bipartisan package as soon as possible and invest in clean energy research as we swiftly approach our shortened time frame in addressing the impacts of climate change.

Without it, the problems our government is creating for itself will cost more than the $93 trillion to implement the GND.