It’s raining, but not really pouring 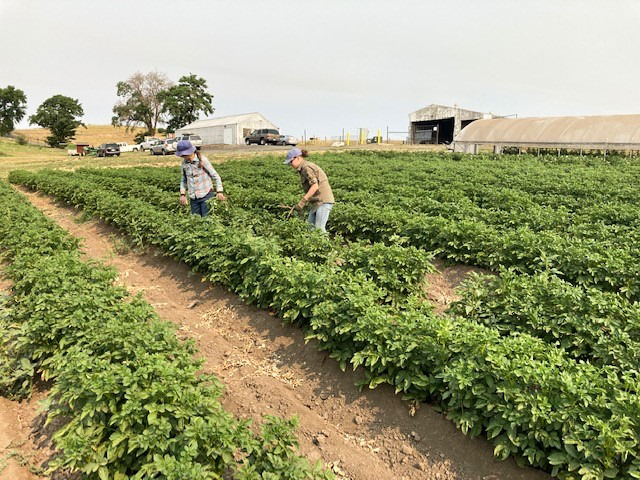 The rain allowed the WSU Eggert Family Organic Farm to skip one irrigation cycle for vegetable crops. The farm had to slightly increase the length of irrigation over the summer because of a lack of rainfall.

WSU Eggert Family Organic Farm received a bit of a reprieve from a longer summer drought after experiencing rainfall on Sept. 18.

Pullman received .29 inches of rain on Sept. 18, according to the Weather Underground. The rain allowed the farm to skip one of their irrigations for vegetable crops, Farm Manager Brad Jaeckel said.

The summer drought has been challenging, Jaeckel said, and it has been uncomfortable to work in.

“We do depend on irrigation to keep our crops watered,” he said. “That’s true any year and we have had to be really diligent and stay on schedule with watering.”

The farm had to slightly increase the length of irrigation because of the higher heat and lack of natural rainfall, Jaeckel said.

Some of the plants that were affected by heat stress include tomatoes, potatoes, cucumbers, kale, chard, tree fruit and garlic, Jaeckel said. Average yields were lower than normal.

The severe summer heat came as a surprise for the farm, he said.

Jaeckel said he is not sure if drought conditions at the farm will continue in later years. He watches the long-term weather forecast, but he does not have any expectations for the coming season because the winter forecast is not out yet.

The majority of watering at the farm comes from irrigation, Jaeckel said. The vegetable production season starts in April, and the farm does not usually irrigate then. But regular irrigation occurs starting in May and continues through October. As temperatures cool down, irrigation is tapered off.

Irrigation also tapers off if there is enough natural rainfall, he said. But sometimes the farm can get too much rain. During the planting season, it is really difficult to use equipment in the field if the ground is soggy. Similarly, at the end of the fall season, it is hard to do tractor work if the ground has not dried out.

Some crops, like onions, cannot get rained on because they will be damaged if they get too much rain inside of them, Jaeckel said. Onions need to go through a drying process when they are harvested to cure, but they can mold if they get wet.

Most fruit is not damaged by the rain, but cherries can split if they get too much rain right before a harvest, he said.

Not every crop is irrigated all the time, he said. For example, the farm stopped watering potatoes back in August.

During the summer, experiencing too much rain is not an issue, Jaeckel said. But right now, the farm needs more rain.

“We definitely need the rain — that quarter inch is gone,” he said. “I wouldn’t have even known it had rained now if I went and dug around in the field. It’s so dry.”

Right now, the farm is doing more harvesting than planting, Jaeckel said. Fall crops at the farm include winter squash, potatoes, pumpkins, carrots, beets and some greens. Hearty greens like arugula are going to be seeded soon in the hoophouses for winter production.

The farm will finish fieldwork by the end of October, Jaeckel said. The farm is doing a compost application, seeding winter cover crops and doing final tillage work to prepare the soil. The farm is also hosting pumpkin u-picks, which are open to the public on Oct. 1, 2, 8 and 9.

COVID-19 has not slowed down business at the farm. Instead, business has picked up, Jaeckel said.