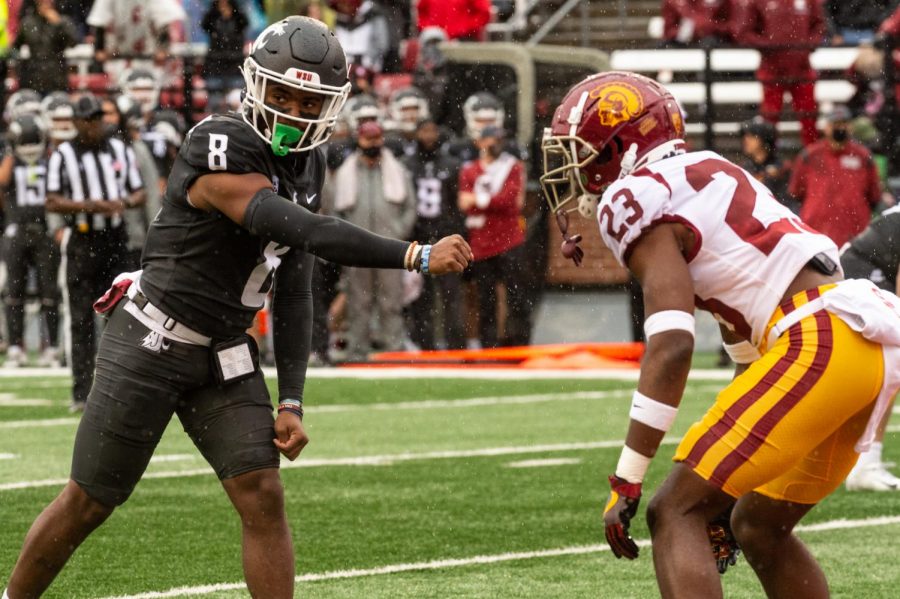 The Cougars head to Berkeley, California, for their week five matchup against the Golden Bears at 2:30 p.m. Saturday in California Memorial Stadium.

The game against Cal will be WSU’s second away game in a row, losing last weekend to the Utah Utes 24-13. WSU will be looking to end a two-game losing streak against Cal.

Last week, Cal traveled to Seattle for their first conference game of the year against Washington. The Bears and Huskies forced the game into overtime. Cal was unable to score in overtime, losing to the Huskies 31-24.

Snapping the losing streak might be difficult for the Cougs because the odds of winning are not in WSU’s favor. ESPN’s Football Power Index gives WSU a mere 25.9 percent chance of winning. The Cal game is the third time in a row the Cougars have been the underdogs, losing in the first two.

Good news for WSU came on Monday. It looks like quarterback Jayden de Laura will be healthy for Saturday. However, Head Coach Nick Rolovich has not decided who will be the starting quarterback.

“We gotta see who’s available and who can go out and do it,” Rolovich said. “There’s definitely some competition aspect to it like it was last week.”

WSU running back Max Borghi is questionable this weekend after suffering a wrist injury last weekend against Utah. Borghi’s outside runs will be a missed part of the Cougar offense if he cannot play.

“I think he’s probably questionable as we move forward into this week,” Rolovich said about Borghi. “It could’ve been a lot worse.”

If Borghi is not able to play, Deon McIntosh is the next man in line. McIntosh has shown his abilities as a running back this season, running for 145 yards so far. If McIntosh can replicate Borghi’s outside run game, the Cougars may be able to score more often.

Scoring is definitely something that the Cougs need to do more of. In the last two games, the Cougars have been outscored by a total of 69-27. A healthy de Laura might be the answer that WSU is looking for. This year, Cal’s offense has swayed towards the passing game. Cal senior quarterback Chase Garbers surpassed 1,000 yards in last week’s defeat, throwing for a season-high 319 yards and two touchdowns.

Like de Laura, Garbers has the ability to run the ball for yards. Last week, Garbers ran the ball 16 times, picking up 71 yards and a touchdown.

“They’ve really improved offensively,” Rolovich said. “I think they are playing at a high level offensively, more than I remember in preparation for them last year.”

Pillars of WSU’s defense will need to stand strong against the “air-raid” offense of Garbers and Cal. Defensive backs such as Daniel Isom and Armani Marsh will be crucial to breaking up passes and forcing turnovers.

Last week, the Cougar defense recovered three fumbles against the Utes. If they can replicate this outing against the Bears, the Cougars will have a better chance to win the game.

Cal and WSU last played each other in 2019. Last year’s game was canceled about two hours before kickoff because of COVID-19, leaving fans to question what would have transpired.

Fans can watch the matchup on the Pac-12 Network with coverage for WSU vs. Cal beginning at 2:30 pm. Saturday.