It is time to give focus to someone besides football 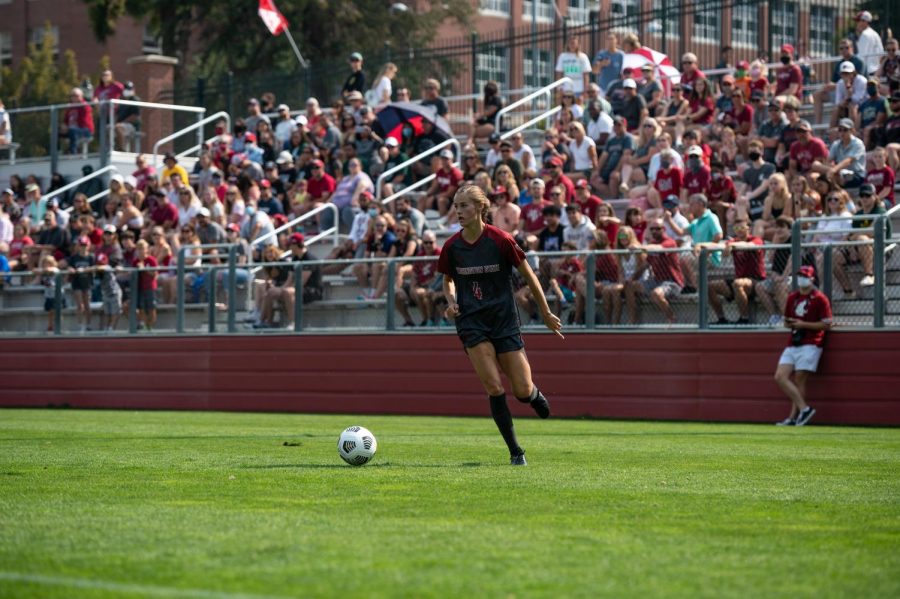 WSU forward Grayson Lynch dribbles across the field in the first half on Sept. 5 at the Lower Soccer Field in Pullman.

WSU is home to a plethora of high-quality sports teams. From baseball to rowing, there are sports going on year-round that compete with some of the top teams in the nation and are able to hold their own.

Even beyond that, the fall or early winter season is packed with fantastic events from talented WSU teams. This time of year, football takes center stage. Usually, that is for a very good reason. I mean, who does not love a good old Cougar Football Saturday.

This season is a little different, though. The football team is struggling. Sitting at 1-3 and not really looking they are going to win another game this season, the Cougar football team is in a really tough spot.

Now is the time to support other Cougar Athletics programs. Well, it has always been the time, but now more than ever.

The volleyball team currently sits one spot outside of the AVCA coaches poll. This past Sunday, WSU upset No. 6 ranked Washington at home. The match included a fourth set that tied the NCAA record for the most points recorded in a single set.

Statistically, WSU soccer sits as one of the best teams in the nation and could present a challenge toward any program in the Pac-12. They are 7-1-1, with their lone loss coming in a surprise upset to Seattle. Besides that and a draw in the opener against Arkansas State, the Cougs have dominated their opponents, including a 7-0 win against Hawaii in Pullman.

Men’s and women’s golf have begun, and both teams look solid this season. Neither squad really seems like they are going to make a splash on the national level, but it is another step in the right direction. Max Sekulic is the leader on the men’s team, having won the Canadian Men’s Amateur Championship and the Northwest Open Invitational (a professional event) over the summer.

Swim starts this weekend with a meet at their home away from home, as the Idaho Vandals host the event. Last season, the team recorded their highest ever combined score at the Pac-12 Championships. This was headlined by Chloe Larson winning the conference title in the 50-meter freestyle. Larson’s win made her the first Coug to win an individual Pac-12 swimming title.

Tennis kicked off their season last weekend with a pair of singles wins in a tournament in Pullman. Savanna Ly-Nguyen and Fifa Kumhom both took home crowns in their tournaments at the Cougar Classic.

Michaela Bayerlova did not compete at the tournament for WSU, but she did win the W15 Frederiksberg Tournament this summer, as well as reaching the quarter and semi-finals in two others. This week, Bayerlova is competing in the W15 Lubbock as the highest-ranked player, coming in with a ranking of No. 532 according to the Women’s Tennis Association.

Basketball is only a couple of weeks from debuting. Oct. 15 marks the unofficial start to the season, with ZZU Mania taking place. Then, just over a week later, on Oct. 24, the women’s team plays their first exhibition game.

The start of the basketball season brings a lot of excitement. Both teams made significant progress last season, and it looks like they will be able to build on that success in 2021.

And all of these are just the officially sponsored programs at WSU. There are 26 club teams at WSU that cover a wide range of sports the university does not cover on its own.

Men’s hockey kicks off their season with a pair of games Oct. 1 and 2 in Seattle against Washington. The men’s rugby team gets their season going Oct. 2 with the WSU Back to Rugby Jamboree. Wrestling starts their season Oct. 15 with the Crimson and Gray dual meet.

All of this is not to say that you should stop supporting WSU football; you absolutely should support those student-athletes giving their all on the field.

However, if you do seem to find yourself frustrated with the way the football program is going, there are plenty of very talented and high-quality athletics programs at WSU that could desperately use your support, whether that be monetarily or just sitting in the stands and cheering on the team.