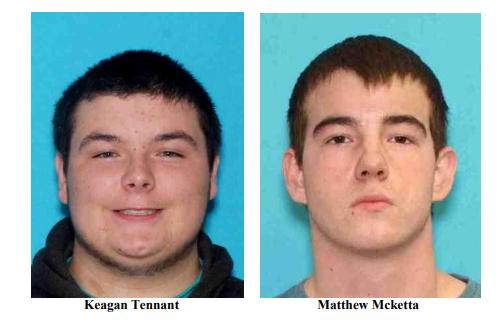 The suspects in the shooting death of an 18-year-old Pullman man have been captured near the Canadian border, authorities say.

According to the Ferry County Sheriff’s Office, Keagan Tennant and Matthew McKetta were taken into custody in the Curlew area after the office received a report that the car they allegedly stole in Moscow had been seen. Tennant was recently removed from the Job Corps program there after he reportedly made threats of violence against other students.

Tennant and McKetta are wanted in connection with the shooting death of Tim Reeves, an 18-year-old Pullman High School student.

Tennant faces charges of involuntary manslaughter and first-degree attempted murder, and both he and McKetta are also charged with several felonies related to attempts to cover up the Reeves’s death.

They will be held in the Ferry County Jail, according to a news release, pending potential local charges and extradition to Idaho.