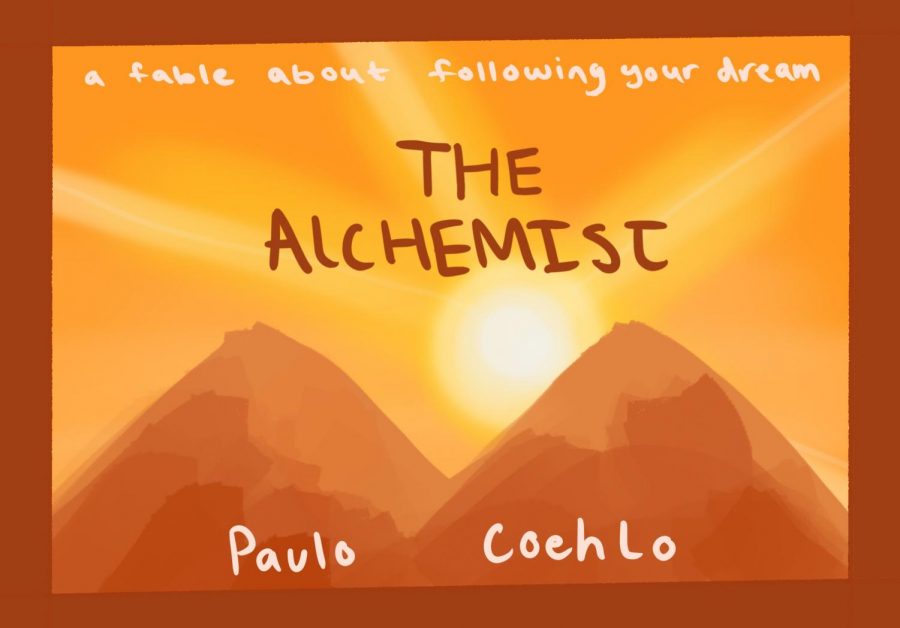 Coelho’s novel was published in 1988, but it is still ahead of the times. His story gives readers a new perspective on life and one’s “Personal Legend.”

Paulo Coelho’s novel, “The Alchemist,” is a tale of adventure. It is motivational, eye-opening and cherished by endless people of all different ages and beliefs.

More specifically, this widely-known novel is about following your Personal Legend, regardless of your circumstances. A Personal Legend is a person’s destiny — no matter how far-fetched or unbelievable.

I felt this book calling me when I saw it everywhere I went. All over social media, in every book store I went into, it seemed like it was always waiting for me, so I finally read it.

It is definitely worth taking some time to read. After finishing it, I finally understood why this novel is cherished by so many. Not only is the writing beautiful, timeless and imaginative, but the themes Coelho presented somehow connect with every person in different ways.

From his writing, I started to understand the phrase “what is meant to be, will be” on a deeper level and that love will never stop someone from one’s destiny. Though it may seem like a stretch that a book would help me understand these ideas, trust me, Coelho is just that talented.

I began to think that, like the main character, Santiago, I was reading this book as part of my Personal Legend. Maybe these themes were what I was meant to be seeing.

Students often struggle if they are on the right path for their journey. I often worry if what I am currently doing will even matter later in my life. Are my classes really preparing me for my ultimate dream life? Is accounting really such a big deal in the long run?

Santiago is a young shepherd who did not want to take the same path as his family. They were shepherds in a small village, which he had lived in all of his life.

Santiago found the motivation to pursue his Personal Legend after a reoccurring dream. In the dream, he is in a field with all of his sheep, and a child starts to play with them. The child then pictures the pyramids with Santiago, telling him he will find a treasure near them.

So, he took a risk and started traveling.

Santiago so badly wanted to travel and follow his dreams. The books he read as a shepherd took him far from his familiar — and monotonous — life in the village.

They also led him to meet influential characters in the book, like the King, who reaffirms Santiago’s search for his Personal Legend and an Englishman who helps him reach his final destination.

Santiago is an extremely relatable character who, much like many of us, did not want to follow in his parents’ footsteps. Instead, he dreamed of doing something his heart called him to do.

When he first began his journey, Santiago hardly had any money. But he did not let that stop him.

I think this shows a lot about his character. Santiago wanted something so badly that he was going to do whatever it took, even if he had nothing.

He relied on the kindness of strangers who connected with him over the intimacy of searching for one’s Personal Legend and the knowledge his experience as a shepherd had given him.

His life in the village, however boring, taught him something that was part of his journey to his Personal Legend. Like Santiago, the lives we are living now are allowing us to build knowledge and skills we might need later.

My favorite quote in the story was said by an Englishman who spoke to Santiago. He said, “When you want something with all your heart, that’s when you are closest to the Soul of the World.”

Along the way, Santiago met so many different people. The gypsy who assured him his dream would be real if he kept going, or the man in the glass shop, all helped him in some way on his journey. Every person he came in contact with never laughed at his dream but instead supported him.

Surrounding ourselves with people who help us be a better person or pursue our Personal Legends are good people to keep around.

This book made me realize I owe a lot to my family and friends who continue to motivate me every day. Whether it be school, small lessons I know I will remember later in life, or simply supporting me when I need them — they are in my life for a reason.

Santiago showed — and reminded — me that without good people, it is hard to be great.

Santiago even met a love interest, which made it hard for him to continue pursuing his dream. This part of the story was a huge lesson in itself.

I am sure we have all considered pushing our own goals and dreams aside for someone we care about. But Santiago’s love interest pushed him to realize that if they were meant to be, he would come back.

Students may not always have a serious love interest like Santiago. But the lesson Coelho is teaching is no matter what relationships you are in, keep following your dream because if the love is true, it will endure.

You should not have to choose between a person and your dreams. The journey taught Santiago and the readers to be patient and persevere through doubt, fear and failure.

I will not tell you how it ends because that would ruin the entire point of the book: the journey is possibly more important than the end goal.

Coelho’s “The Alchemist” includes themes of gratitude and hope, alongside a story packed with twists, turns and challenges for the characters.

The story of Santiago encourages the idea that anything is possible, no matter what your life looks like. It is a prime book to read for all students to assure you that whatever your Personal Legend is — to be a writer, have a family of rescued dogs or start a restaurant — it can happen.

You just have to take the first steps toward your dreams, even if you are afraid of where the journey might take you.