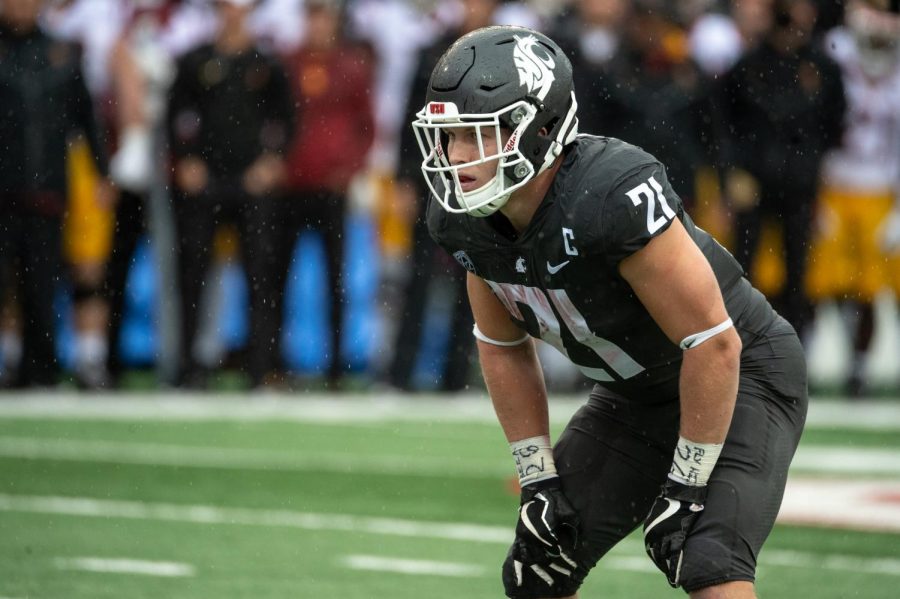 WSU picked up their first conference win of the season on Saturday against the California Golden Bears, winning 21-6.

WSU is now 2-3 on the season after the victory over Cal. The win breaks a two-game losing streak for the Cougs.

Defensive success was key for the Cougar win, limiting the Bears to just six points. Armani Marsh was a large part of the success, responsible for 12 total tackles and seven solo tackles. Cougar veteran Jahad Woods was responsible for seven tackles in the game, moving him to fifth all-time for career tackles in WSU football history.

“A lot of what you’ve seen is some great plays on early downs,” head coach Nick Rolovich said. “Getting us to third and manageable, getting some of the third-down package stuff able to be run. It’s incredibly difficult and our guys have taken a real ownership with it.”

The Cougar defense seemed to constantly be in the Cal backfield, tallying four sacks, seven tackles for loss of yards and causing Cal quarterback Chase Garbers to scramble and be less effective running the air raid offensive style that has worked for the Bears so far this season. Garbers threw 14-30 for a total of 152 yards and one interception.

“Our d-line, our front seven has been playing out of their minds,” Marsh said. “They’re relentless and they’ve been playing amazing.

After picking up two sacks and two tackles for loss, Brennan Jackson was named Pac-12 defensive lineman of the week.

Jayden de Laura started at quarterback for the Cougars, returning to the starting quarterback role after sitting out in last weekend’s loss to Utah due to a leg injury caused two weekends ago against USC. In his return, de Laura threw 25-41 for a total of 219 yards with three touchdowns and two interceptions.

“It’s one I hope he never forgets,” Rolovich said. “It better be in the Top 10 or I’m gonna have to make a phone call and let people hear my mind. That’s a hell of a play.”

No phone call would have to be made as Jackson Jr’s catch was ranked as the number one play on SportCenter’s Top 10 plays.

The Cougar run game was led by running backs Max Borghi and Deon McIntosh. McIntosh led the team in rushing yards with 59 yards in 12 attempts followed by Borghi who rushed for 40 yards in 13 attempts.

Ron Stone Jr. was given the opportunity to play running back late in the game. A core member of the Cougar defense, Stone Jr. rushed for a gain of seven yards in his only attempt.

“He’s definitely got a piece of this team’s heart,” Rolovich said. “If you get a chance, whether you are with the media or a citizen of Pullman or a Coug, to meet Ron Stone, that’s a good human for this world and I’m happy to be around him.”

The Cougar offensive line improved greatly this week, going from allowing eight sacks last weekend to just one on Saturday.

The win is the first time the Cougars have won in California Memorial Stadium since 2013.

Next up for the Cougars is a three-game home stand beginning next Saturday against the Oregon State Beavers for homecoming weekend.