WSU has perfect road trip with wins against Utah, Colorado 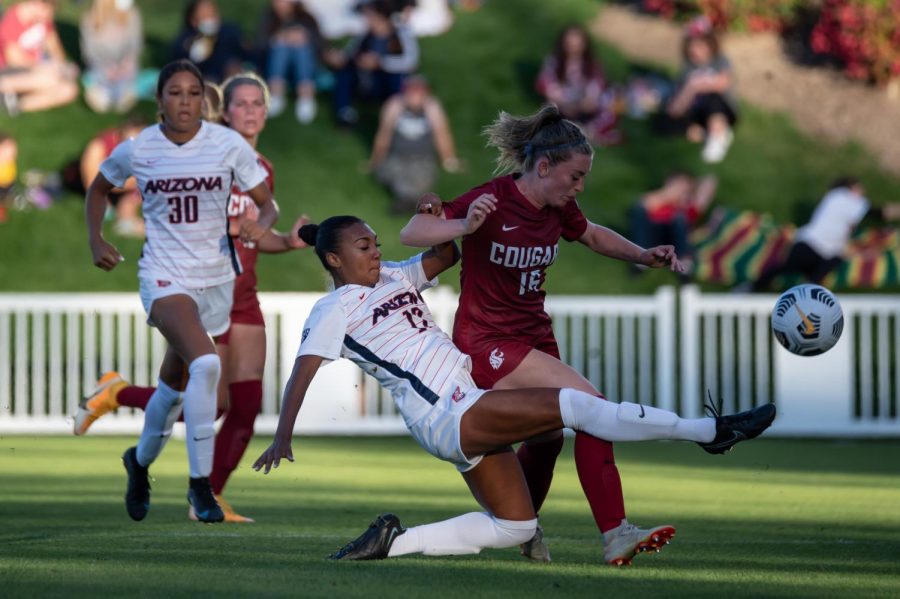 WSU forward Alyssa Gray battles Arizona defender Mariah Dunn for the ball during the first half of a match Sept. 24, 2021, in Pullman.

It was another successful week for Cougar soccer as they came home from their road trip with two wins. WSU notched a 1-0 win against Utah and a 2-0 win against Colorado. With the victories against two conference contenders, the Cougars improve to 9-1-1 overall and 3-0-0 in conference play.

The Cougars remain undefeated on the road and have outscored their opponents 12-0 in the five contests. The win against Utah was their fourth-straight win against the Utes. During the game, fifth-year Sydney Pulver became the Cougars’ all-time leader in matches played with her 87th career match.

“In the first half, we were in complete control of this game,” said head coach Todd Shulenberger. “In the second half, it got a little, a little dicey there. There was about a 15-minute span where I felt like they were on top of us a little bit. We had some issues in the back we had to sort out. But these kids grinded it out.”

The match took a while to heat up with no goals coming in the first period. The Cougars remained in control of the ball for the vast majority of the half but could not get the ball in the net.

The lack of action continued into the second half as the game remained tied. Although the Cougars retained control of the ball, it was not until the 76th minute when sophomore forward Margie Detrizio assisted junior midfielder Grayson Lynch to the first and only goal of the night.

The last yellow card of the night was issued to Shulenberger. Detrizio posted her third assist of the season, which tied for the second-most on the team.

After that, the Cougars headed to Boulder for a match against Colorado. Again, action in the game took a while to heat up as no goals were scored in the opening period. The Cougars edged out the Buffs 10 to 7 in shots in the first half.

The first goal of the night was not scored until the 57th minute when fifth-year forward Elyse Bennett secured the lead for the Cougars. Bennett was assisted by freshman goalkeeper Nadia Cooper. It was Bennett’s seventh goal of the season, which solidified her place as team leader in goals scored.

The second goal of the night was scored a little over 10 minutes later when sophomore forward Alyssa Gray, assisted by senior defender Elaily Hernandez-Repreza, secured the victory for WSU. It was Gray’s fourth goal of the season.

The remainder of the game was aggressive. Colorado head coach Jason Green and Detrizio received yellow cards in the 71st minute. Alger received a yellow card in the 86th minute.  This match continued to show the strength of Cooper, who remains perfect in goal through her seven career appearances.

Cooper has yet to concede a goal in 495 minutes played. The win was the third straight against the Buffs.

The Cougars have continued to show depth in their roster, as eight different Cougs have scored game-winning goals this season.

“Colorado is a really difficult team to play here,” Shulenberger said. “Excited for the six points in a row. This group is grinding. This group is winning on the road and that’s what’s key here right now. So we’re healthy and we look forward to next week.”

Next up for the Cougars is some tough competition against No. 7 Stanford at the Lower Soccer Field in Pullman. The match can be seen on the Pac-12 network with stats by StatBroadcast. It can also be viewed in person.