Social media takes ‘social’ out of everything 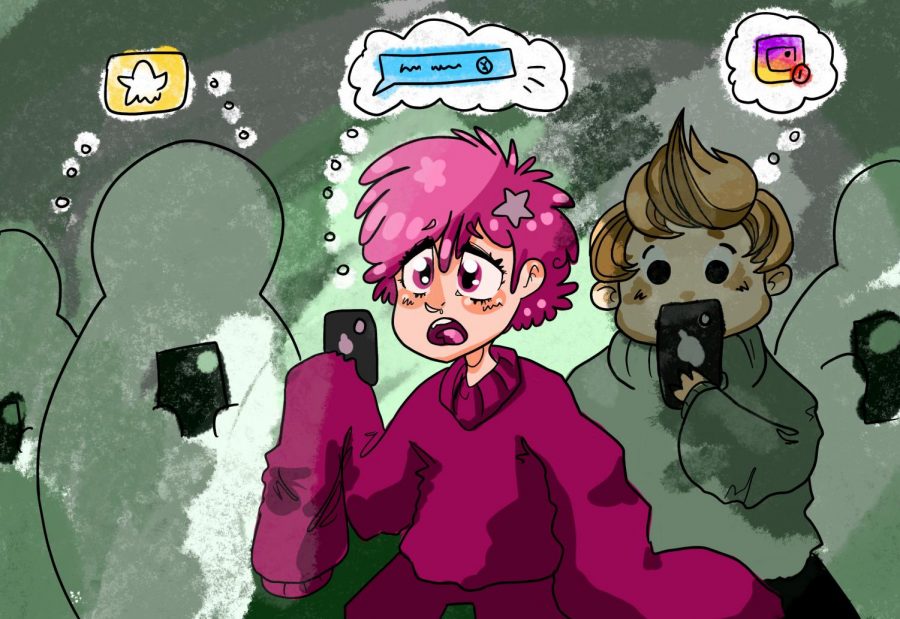 The internet is dominating communication. But at what cost?

People viewing social media as a profound alternative or complete replacement of face-to-face interaction is detrimental to our lives. It is only getting worse with the ongoing COVID-19 situation.

Everyone knows that human beings are social animals. We learned how to cry to signal to others that we need support and we learned how to feel guilt in order to let others know that we are aware we violated a social norm.

Human touch can lower our stress levels significantly, and physical intimacy in a healthy relationship can prolong our lifespan. Ultimately, the absence of social interaction can kill us.

It should be obvious at this point that human beings are not hardwired for forming meaningful connections over a screen, yet so many of us are drawn to spending hours of our day on Snapchat or Instagram.

I am not downplaying the benefits of social media by any means. As someone with social anxiety, I like being able to meet new people without having to overtly stress about how I present myself. It is nice being able to interact with people across the nation, and subsequently, the world.

However, I think there can be too much of a good thing. Hence, I do not think it is an issue that we are using social media. Rather, I think we are overusing what should be a tool and transforming it into an entire support system.

WSU junior Gerard Holeman said he agrees with the topic at hand. For him, social media is harmful for genuine social interaction.

“Our society has moved to an online virtual setting, leaving us desperately looking for more likes,” he said. “I prefer making friends in person; it’s just easier.”

“I feel like the connection aspect is significantly weaker when friendships are made online,” he said. “While social media can connect you to people across the globe, it can separate you from those who live just a few miles away.”

He also brought up the idea of how easy social media makes it to be ingenuine.

“Many people try to put up a facade that isn’t true to their in-person personality,” Horton said. “There is also a lot less time to think out answers in real life, therefore someone who may be clever online could be seen as awkward offline.”

Many people are not aware of how attachments are formed, so it makes it difficult to define how they are negatively affected by the internet.

The work of Mary Ainsworth, a psychologist who contributed to the creation of attachment theory, is helpful in understanding this idea.

Ainsworth posited the concept of cue-response, which means that relationships are centered around the idea that one person sends a behavioral cue and the other validates that cue with a behavioral response. This back-and-forth creates a cue-response chain and a disruption that can ultimately halt attachment.

This is extremely difficult to facilitate through text, as this concept relies on observable features such as facial expressions, body language and tone. Though we have video calling as a potential workaround, attachment theory also relies on physical interaction. The most common example of this is a baby crying (cue) and being held by a parent (response).

I am not entirely convinced that a relationship — be it platonic or romantic — formed online can, in any way, be as significant as one formed in a real-world setting.

Friendships and the like can be made on social media, but I think it is safe to say that they are more brittle than those made without it.

“[Social media] can be very harmful because it causes the lack of development in building meaningful human relationships,” Holeman said.

Ideally, I would like to see a culture change where we rely less on social media to make our friends and more on in-person events where meeting new people is greatly encouraged. But alas, that would require more people pushing for this change.

Unless we all contribute to fostering meaningful interactions in the nature-intended way, it is my concern that human society is collectively changing social interactions for the worse.