Artist lives her dream while helping students achieve theirs 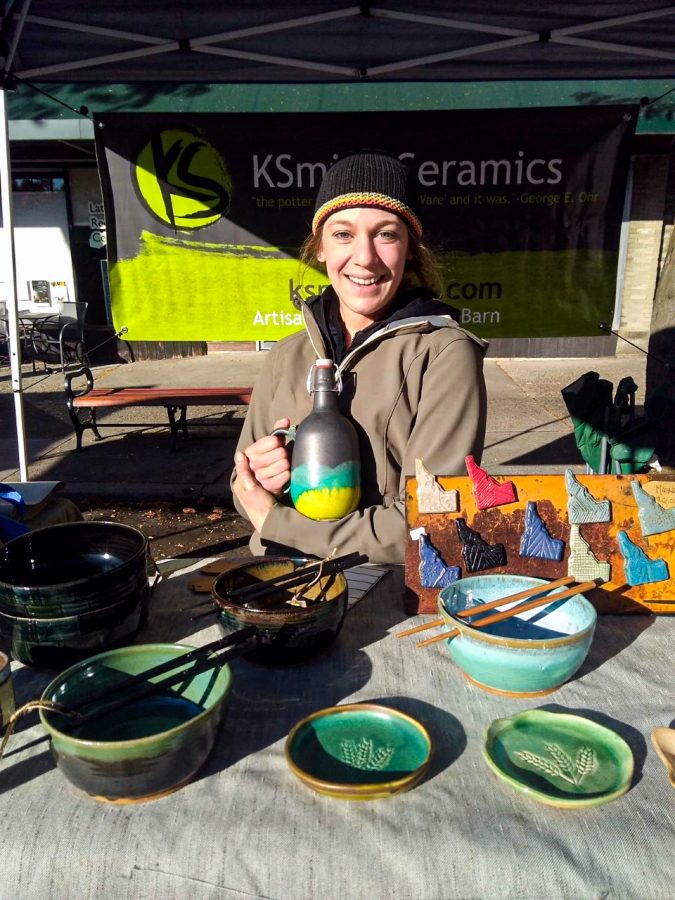 Uniontown, Washington, hosts a community of artists in a white barn on the edge of town. The Artisans at the Dahmen Barn is home base for Kassie Smith, pottery instructor and ceramics artist.

During her childhood, Smith said she lived in a variety of places, including Olympia. She fell in love with the Pacific Northwest and vowed to return someday.

After obtaining her bachelor’s of fine arts from Saginaw Valley State University in Michigan, Smith said she made her reappearance in the PNW as a graduate student at the University of Idaho.

Upon completing her graduate degree in 2016, she said she decided to stay and began working at UI. At the same time, she became the instructor for the pottery studio at the Artisans at the Dahmen Barn, a crucial part of her life she has no plan to end in the foreseeable future.

Smith said she occasionally has the opportunity to run classes in her position as a ceramics technician at WSU.

During her weekend breaks, Smith sells her pottery at the Moscow Farmers Market. Smith said she gets to enthusiastically chat with locals who visit the stand often and give her pottery a home. At her stand, she sells different functional pieces such as mugs, plates and ramen bowls.

“If I could make mugs for the rest of my life, I would, and I would be happy,” she said. “There’s just so many variations you can do, and I never get bored with it.”

Smith said she has met many individuals who have become her students at the Dahmen Barn through the farmer’s market.

One of Smith’s students, Kelsey Grafton, often utilizes the resources at the Dahmen Barn to get a second opinion or help when she needs it. Grafton said she once went to Smith for advice about a breastplate piece that was too big to fit in a kiln.

With Smith’s guidance and experience, she was able to work around the kiln’s dimensions and get the ceramic piece to fit, Grafton said.

“Your victories become her victories,” Grafton said. “She isn’t afraid to celebrate someone else’s work.”

The enthusiasm and love Smith brings to Dahmen Barn’s pottery studio creates an atmosphere that allows all skill sets and levels to feel comfortable in the community, Grafton said. This includes someone who has never touched clay before or someone who has been at Dahmen Barn for years.

“It’s so magical,” Smith said. “That’s why I love doing it so much. Seeing that progression, it fuels my soul, and they keep me inspired to try new things and learn new things as well.”

In her studio, Smith works endlessly to create new pottery variations and keep her shop supply high. Smith said she finds the repetition of familiar movements extremely therapeutic, especially when doing a piece she has done many times before.

The more artistic side of her work, including how to convey contemporary messages, can be frustrating at times, she said. In spite of this, Smith continues to expand her artistic style, taking inspiration from students and past work to present her ideas.

“I get to live my dream life,” she said. “Although it’s not always fun and games and it’s hard work, I’m happy knowing I get to wake up and do what I want every day.”

Along with selling functional pieces at places like the Dahmen Barn and the farmers market, Smith said she has created contemporary pieces in the past. She previously did an exhibit at WSU in 2019 named “Menstrual Soliloquy,” which represented what it is like to have a uterus.

The exhibit featured a plethora of different pieces, like a functional brass knuckle mug, ceramic tampons hanging from the ceiling and conceptual 3-foot-tall sculptures.

Over the past few years, Smith said she has taken a break from her more contemporary work in favor of creating production and functional pottery. She will return to her more artistic work on Nov. 7 alongside WSU ceramics professor Lo Palmer and master of fine arts student Adam Stuart.

The ceramics exhibition will be held through the month of November at the Dahmen Barn.

The exhibit will run through the end of the month.