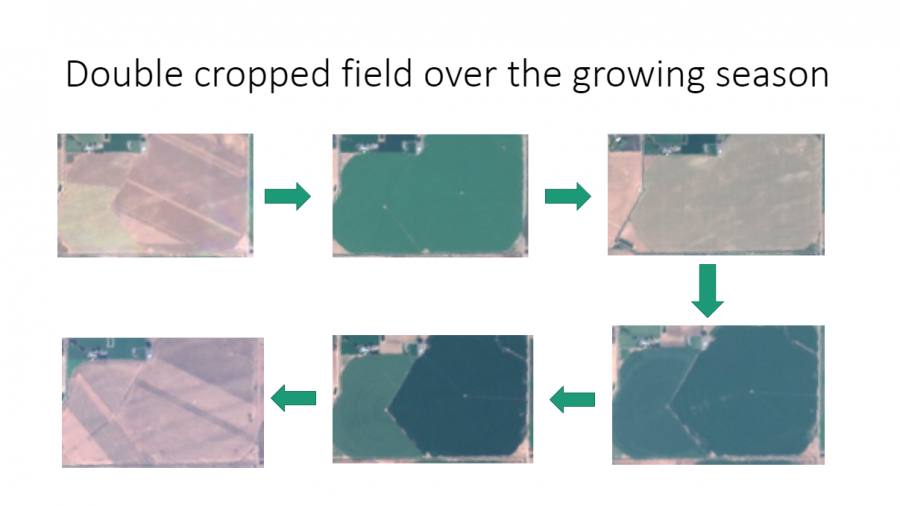 Researchers from WSU and the Washington State Department of Agriculture are using satellites to monitor the amount of double cropping in the state.

Double cropping occurs when two crops are harvested in different seasons on the same field within one year, said Michael Brady, main researcher and associate professor from the WSU School of Economic Sciences. The fields are monitored by Landsat satellites, which were provided by NASA.

“They’ve been in operation since the nineties,” Brady said.

At the start of a crop season, fields appear brown on the satellites, he said. When crops begin to grow, the fields become green, which is also visible on the satellites. The crops are then harvested in the middle of summer and they become brown again, signifying the end of one crop season.

The second crop season begins right after harvest when farmers plant a different crop in the same field, he said. The cycle of green and brown seen on the satellite repeats again, signifying a second crop season.

In a normal crop season, fields will grow green through summer and into fall before becoming brown, Brady said.

Double cropping increases the amount of water needed for a field. Brady said researchers track double cropping so they know if more water needs to be allocated to a specific region.

When one farm requires more water, the irrigation system as a whole needs more water to make sure every farm is receiving the water that is required, he said.

Farms share irrigation systems, so if one farmer is double cropping, there is less water available to other farmers, he said. The water comes from streams, rivers and tributaries from the Columbia River.

While WSU uses Landsat satellites, the WSDA uses Sentinel satellites provided by the European Space Agency, said Perry Beale, manager of the natural resources assessment section for the Director’s Office of the WSDA.

The Sentinel satellites help the WSDA track fields that display signs of double cropping, which they later verify in person, Beale said.

“What we bring to the table is the ground truth, right?” he said. “We are verifying what’s happening on the ground.”

Fields rarely produce the same crops twice in a year, he said. Farmers rotate crops each season to optimize soil nutrients, like harvesting green peas one season then sweet corn the next.

Crop rotation is used in double cropping exactly how it is used for a normal year-long season, just in a shorter time frame, Brady said.

It is possible that double cropping might be able to help mitigate some of the effects of climate change, he said.

“I’m not saying that that’s a win, but it could be,” Brady said.