Glyphosate: What’s in your water? 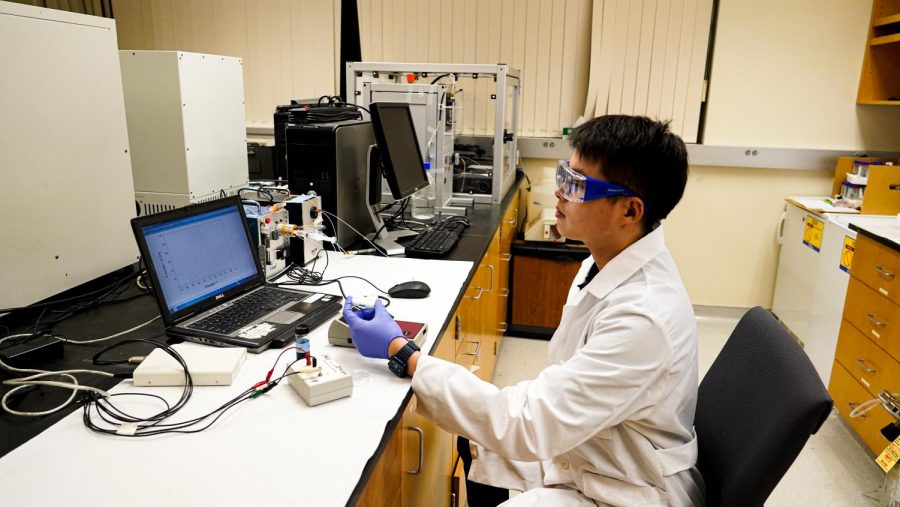 Shichao Ding, WSU doctoral candidate and primary author of the study, used a 3-D sensor to test glyphosate levels in beverages. Glyphosate can possibly cause major health issues, but is safe to consume in small amounts.

WSU researchers at the Engineering Teaching and Research Laboratory have developed a 3D-printed sensor capable of detecting glyphosate in beverages.

Glyphosate is a herbicide that can possibly cause major health issues like cancer for people, said Zhaoyuan Lyu, WSU doctoral candidate and second author of the study.

“Glyphosate … was commercially released,” Lyu said. “And it’s one of the most widely used herbicides.”

She said the dangers of glyphosate have been challenged by organizations that claim it does not pose a huge threat to human health. This pushes a need for studies like this one to be researched.

Shichao Ding, WSU doctoral candidate and primary author of the study, said he used the 3D-printed electrochemical sensor to test glyphosate levels in orange juice and raspberries purchased from Costco.

He said he did not detect toxic levels of glyphosate in the products.

Although beverages were the main subject of the study, the sensor can also be used to test other foods as well as environmental samples like soil, according to the study, which was published in June.

It is safe for people to consume commercially-released products that have small amounts of glyphosate. But he said it is still important for people to care about glyphosate exposure because of its potential link to cancer.

The sensor uses a molecular imprint method, which allows it to be cost-efficient. The sensor uses cheap nanomaterials as a natural antibody to detect glyphosate, Ding said.

“This is a very low cost [method], and we want to continue to reduce the cost,” he said.

Ding said he wants to improve the sensitivity of the device in order to enhance its performance.

Lyu said she wants to continue her research by using the sensor to detect glyphosate in bodily fluids such as urine and blood to better monitor human health.

“Maybe in the future, [the sensor] can be commercialized,” she said.

The ultimate goal is for the sensor to become a widely available method to monitor human health and the impacts of glyphosate, Ding said.