Former Stubblefields manager brings the party back to Pullman 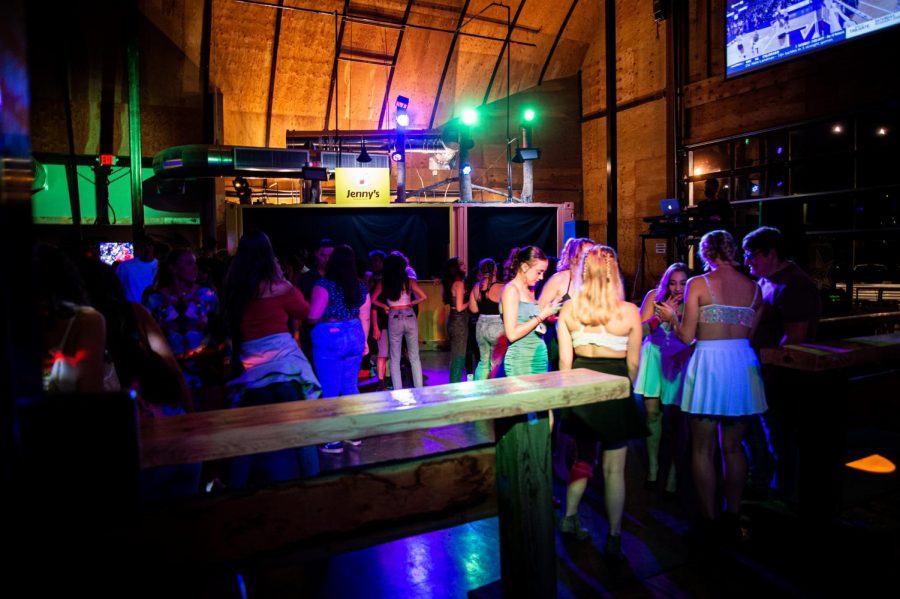 Patrons gather on the dance floor at Lumberyard's grand reopening on Saturday.

Local food hall Lumberyard reopened last Friday, thanks to a familiar face from the late-great bar and grill, Stubblefields.

The Greek Row staple Stubblefields permanently closed in August 2020, after 15 years of nights filled with loud music and high energy.

He said he looked at a couple different places to open his new business but ultimately decided on the giant aluminum-covered half-dome at 305 N Grand Ave that is Lumberyard. The space features two bars, multiple restaurants, a dance floor, an Airbnb and an entertainment center.

“This building is extremely beautiful,” Goldfinger said. “I looked at a couple different locations, but this was always the first location and the best location.”

Oct. 1-2 was the grand reopening of Lumberyard. On both nights, the place was packed with students enjoying their night. The club is not just for the 21 and above crowd; individuals over 18 can party on the first floor, buy food and still enjoy the music.

The large building has an industrial kitchen, an upstairs balcony, a patio, a stage and an entertainment room full of games. There is also a barn with a stage inside that is large enough to host events and concerts.

Inside Lumberyard are two independently owned and operated restaurants: Poke Man, a poke bowl place, and Timber, a bar and grill with classic American fare. Goldfinger said he is still searching for other restaurants to add to Lumberyard, and there is also space on the property for a few food trucks.

There is an Airbnb available to rent on the first floor of the building. It features two bedrooms, two bathrooms and a kitchen area. Goldfinger said the idea was to create a convenient place to sleep after a night of partying.

“You could just say, I’m going to bed and just open up a door and just go inside your Airbnb,” he said. “I mean, isn’t that convenient? What if you woke up in the morning and you were hungry, and you just walked out to the restaurant and got pancakes.”

During the pandemic, Goldfinger said he missed loud music blasting through speakers and watching people have fun. He said that is what he wanted back in his life, both for himself and anyone else that has been missing it in the last year and a half.

Goldfinger has been a DJ for almost all of his adult life. Since he was a little kid, he said he dreamed of making music. After arriving in Pullman for school, he started working as a DJ for local radio stations. His career really took off when he started working at a bar called The ZZU which has since been replaced by The Land.

“I have DJ’d in almost every one of these bars here,” Goldfinger said. “There’s almost nothing that I haven’t touched.”

Pullman resident Kyah McKinlay said she attended the grand reopening because she wanted to see how similar it was to Stubblefields. She thought Stubblefields was an amazing place but that the Lumberyard had a good vibe.

Senior psychology major Lydia Cox said she used to go to Stubblefields when she was a sophomore, but it closed before she turned 21 years old.

“I’m here to experience ‘Stubbies’ when I’m 21 and have a good night with my friends,” she said.

Fifth-year student Elijah Stinham turned 21 right before the pandemic and only went to Stubblefields a few times before the bar shut down at the start of the pandemic.

“The space is really cool, and I’m liking it so far,” Stinham said. “A lot cooler than the last place.”

Goldfinger said the number of people that attended opening night was shocking, and he was grateful for how many people came. He said it was fun seeing his old friends at the new location and that people went “bananas” during the opening.

Goldfinger said that the opening weekend crowd was roughly a 50-50 split between those older and younger than 21. He said he wants the Lumberyard to be for everyone, no matter their age.

“It’s the same thing, just a different location, a different name. And we’re ready to rock and roll,” Goldfinger said.