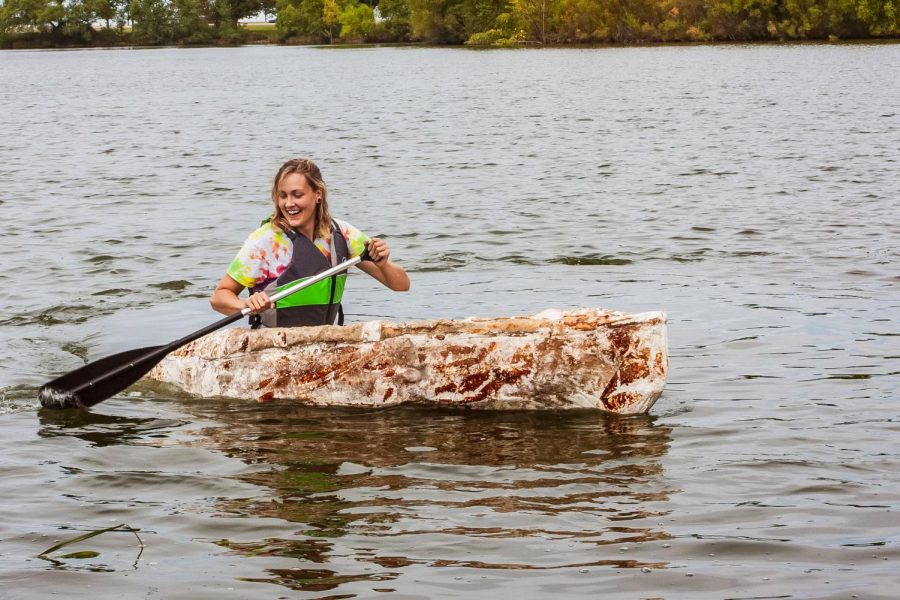 Ayers, sophomore agriculture and bioengineering major, said her inspiration for this project came from her first encounter with fungi — a documentary that talked about using fungi for packaging materials.

She believed she could also use mycelium — the twisted network of fungal threads — to make a flotation device. After watching the film and writing multiple research papers about fungi, she said she created the plan for building the boat.

“I wasn’t afraid of making mistakes because I knew that would happen,” Ayers said. “I did a bunch of different research on how to make [the canoe] structurally stable. I came across aerolite canoe designs that would keep it lightweight and have stability.”

After finding a design that would work well for the boat, Ayers worked to create the mold for the inside. She said she spent nearly 60 hours making the paper-mâché for the inner and outer parts of the canoe. Then, she built a canoe hammock to hold the shape of the boat. She also used sawdust and brown pallet wood to build the canoe.

Ayers said she emailed William Ashley Gordon, a Nebraska mushroom farm owner, for advice on what kind of mushroom to use for the boat.

Gordon offered her a job to work on his mushroom farm, where Ayers learned about the propagation of mushrooms and how to grow them for human consumption, she said.

Ayers used her newly found skills to grow the mushroom in a nontraditional environment like a canoe; normally, mushrooms are refrigerated and transferred between different growth mediums, Gordon said.

“I felt that she needed to learn mushroom cultivation so that she could better understand the process, and it would help with [the project],” Gordon said. “I tried to teach her all the knowledge that I had.”

Ayers then had to pick the type of mushroom she was going to use for the canoe. She said Gordon helped her decide which to use.

She said she also threw old blocks of different species on the ground to determine which one would hold together best.

“The mushroom mycelium binds together the wood, and we put that in a form that created the canoe,” Gordon said. “Mushrooms grew off of the canoe after we made it.”

The project spanned over a few months before the canoe was ready to be taken out onto the water. Ayers said her first time in the canoe lasted about four hours.

“The most rewarding part was that first time out on the water when the canoe actually worked,” she said. “I could not hold in my smile; I think I even screamed a little bit.”

The canoe went to the Nebraska State Fair, where many people learned about the methods used to create the canoe, Gordon said.

“We tried to talk to as many people as possible about the canoe, and we loved anybody who showed even the slightest amount of interest in it,” he said. “We explode forth with all of this knowledge about what it is and how we did it.”

Along with the state fair, a local broadcasting station wanted to record some footage of the canoe. Ayers said that she spent around five hours in the canoe for that appearance.

This is not the end of Ayers’s time with mushrooms, however. She said she has three notebooks full of ideas, one of which includes growing a full-size pontoon.

“I already have designs made,” she said. “The main thing I am trying to do is start a mushroom club and get members to help me grow it.”