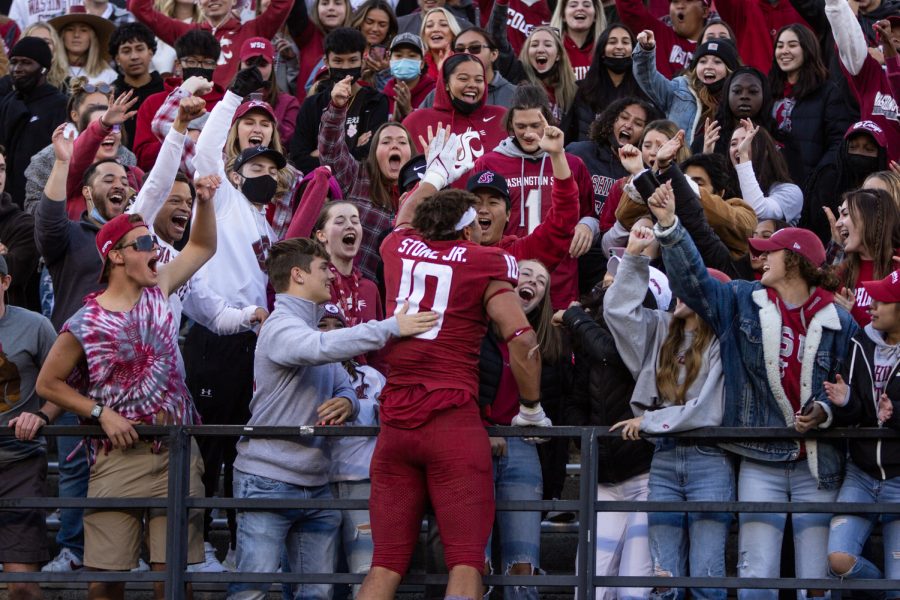 WSU defensive edge Ron Stone Jr. (10) celebrates with fans after a win at a college football game on Oct. 9, 2021, at Martin Stadium in Pullman.

The Cougars pulled off their most impressive win of the season on Saturday, defeating the Oregon State Beavers 31-24.

For the first time this season, the Cougars had a better second half than first, consistently marching down the field and converting on four touchdown opportunities.

The first points of the game belonged to the Beavers thanks to a 2-yard touchdown run from Jack Colletto, putting Oregon State up 7-0 after a made extra point from kicker Everett Hayes.

The Cougs answered with a made field goal from Dean Janikowski, getting WSU on the board 3-7.

The Beavers then kicked a field goal of their own, bringing their lead back to seven points at 10-3. The score would remain the same until halftime.

The Cougs were 1-3 scoring in the red zone for the first half of play, failing to convert drives into points twice.

Having not done well in second halves so far this season, the Cougars could not rely on their first-half performance for the win this time. Coming out for the second half, WSU showed life on the sidelines, jumping and creating excitement for the last 30 minutes of play.

“We came in at halftime and told each other, ‘You know what, we’re going down the field but we’re just not punching it in,’” de Laura said. “When we get the chance, we gotta punch stuff in.”

The talk in the locker room worked and WSU was able to tie the game 10-10 thanks to back-to-back rushes from running back Max Borghi. The touchdown marked Borghi’s 23rd, tying Rueben Mayes for third-most rushing touchdowns in WSU history.

WSU then took the lead for the first time in the game with a 55-yard connection between de Laura and wide receiver Joey Hobert. The touchdown is Hobert’s first career touchdown and put the Cougs up 17-10.

Hobert’s touchdown catch ended a seven-play, 95-yard drive that was made possible by the defensive prowess of last week’s Pac-12 defensive lineman of the week, Brennan Jackson. Jackson caught an interception that was originally tipped by Derrick Langford Jr., giving de Laura and Hobert the opportunity to connect for the second Cougar touchdown of the game.

The excitement in Martin Stadium picked up when the Beavers answered back with a quick drive of their own, scoring on a two-play, 65-yard drive, crossing the goal line with the ball in running back Deshaun Fenwick’s hands.

The third quarter ended with the Cougs and Beavers tied 17-17.

The Cougars scored another touchdown, set up by a 58-yard pass to Travell Harris, bringing the Cougars to the 15-yard line. Harris led receivers with 147 yards, the most of his career.

A touchdown reception by Lincoln Victor capped the four-play, 75-yard drive for WSU, giving the Cougs their second lead of the game now up 24-17. Victor’s touchdown was his first wearing the Cougar crimson and gray.

Oregon State then tied the game thanks in part to running back B.J. Baylor breaking through the Cougar defensive line. Baylor’s run set up fellow running back Fenwick for an outside pitch touchdown and his second rushing touchdown of the game, evening the score at 24-24.

With around five minutes left in the game, the Cougars marched down the field again, ending the drive with a touchdown pass caught by Deon McIntosh which gave WSU the lead 31-24.

On the scoring reception by McIntosh, the Cougs fooled the Oregon State defense by lining up as if they were going to run up the middle. This left nobody covering McIntosh resulting in an easy touchdown pass for de Laura. The drive was almost all McIntosh, accounting for 43 of the 75 yards gained on the drive.

Oregon State then got the ball back for a chance to tie the game. The Beavers were down to their last play on fourth and 10 at the WSU 28-yard line. On a pass intended for Beaver wide receiver Anthony Gould, WSU defensive back Armani Marsh was called for pass interference, giving the Beavers a fresh set of downs now just 14 yards from tying the game.

At this point, the WSU student section was deafening, making advancing down the field much harder for the Beavers.

On first down, edge Ron Stone Jr. broke through the Oregon State offensive line and sacked quarterback Chance Nolan for a loss of 8 yards, pushing the Beavers back to second and 18.

Two stops later and the Beavers were once again down to their last play and it was a good one. On fourth and 19 from the WSU 23-yard line, Chance completed a pass to Trey Lowe who was stopped a yard from a first down by Hicks III, his tenth tackle of the game.

“He deserves it, I’m proud to be his coach,” head coach Nick Rolovich said about Hicks III. “I’m happy he has this memory for the rest of his life.”

Cougar fans erupted with cheers as de Laura and the offense came back onto the field in victory formation. A kneel from de Laura and the clock ran out, ending the game with a 31-24 Cougar upset victory.

The Cougars have now beaten Oregon State eight years running. After the win, the Cougars are ranked third in the Pac-12 North with a 3-3 record.