WSU falls to No. 14 Stanford, defeats California at home 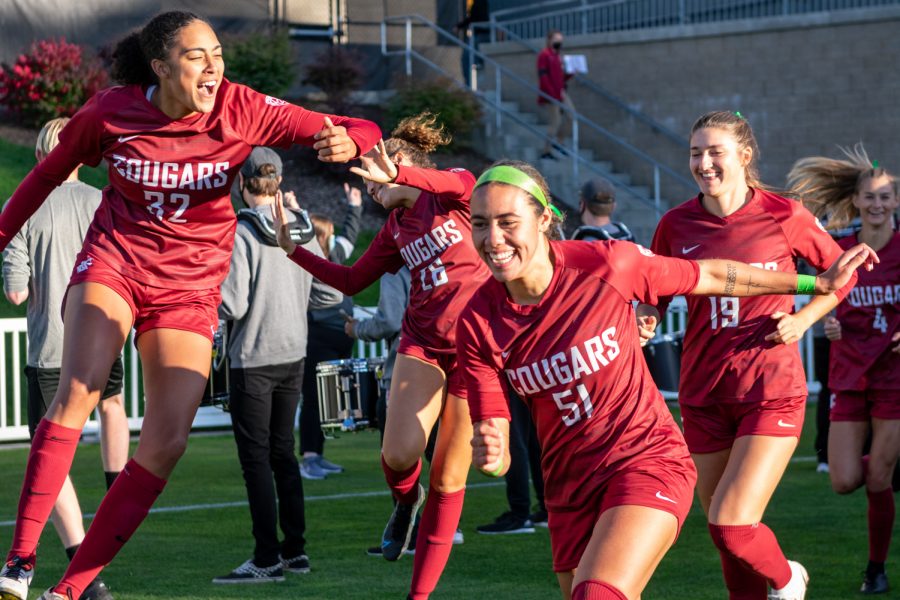 WSU lost their losing streak before quickly rebounding for a win last week. The Cougars lost 1-0 to Stanford on Thursday and won 2-0 against California on Sunday at the Lower Soccer Field in Pullman. The matches solidified the Cougars record to 10-2-1 overall and 4-1-0 in conference play.

With the win, Stanford improved to 9-2-1 overall and 3-1-0 in conference play. The first shot of the night was aimed by Cardinal defender Sierra Enge. The Cougars quickly regained control of the ball and shot twice but neither attempt found the back of the net.

After that, the Cardinal dominated. Stanford took three shots before a fourth turned into a goal in the 29th minute when Cardinal senior midfielder Naomi Girma was assisted by sophomore defender Julia Leontini. It was Girma’s third goal of the season.

That shot would be the deciding goal. After the Stanford goal, the Cougars regained control of the ball and attempted a few shots but none were successful. A shot by the Cardinals marked the end of the first period.

The Cougars and the Cardinals switched possession of the ball for the rest of the game, but no shots turned into goals. The loss snapped a solid win streak for the Cougs and a record 578:45 shutout minutes.

“Defense across the board were doing a great job there. And continuing to keep pushing forward defensively,” head coach Todd Shulenberger said.

Despite the loss, freshman goalkeeper Nadia Cooper became the program’s record holder for consecutive shutout minutes with 532:56 minutes to begin her career before relinquishing her first career goal.

The win marked the third-straight time defeating California and the second-straight shutout. The Cougars maintained control of the ball at the beginning of the game before the first goal came from a penalty kick in the 34th minute by senior midfielder Sydney Studer.

The second period started with fouls against both WSU and California. The Cougars maintained control of the ball and scored their second and final goal of the night less than ten minutes into the second half.

Fifth-year forward Elyse Bennett, assisted by Studer, scored her eighth goal of the season. Her eight goals are tied for third in the Pac-12. It was her 85th career match, tying Morgan Weaver for third all-time at WSU.

The Bears regained control of the ball after the goal but could not get the ball in the net. The Cougars took the ball back and fielded multiple shots, but none hit the net. The end of the game was full of fouls by both WSU and California until the end of the period.

“I’m happy to have a little shutout here,” Shulenberger said. “You know, quite honestly Thursday was disappointing. I know it was Stanford but we were in that game we could have at least tied if not won that game.”

The Cougars’ next game is on the road at 7 p.m. Friday against Arizona State in Tempe, Arizona. The game can be watched on the Pac-12 Network.