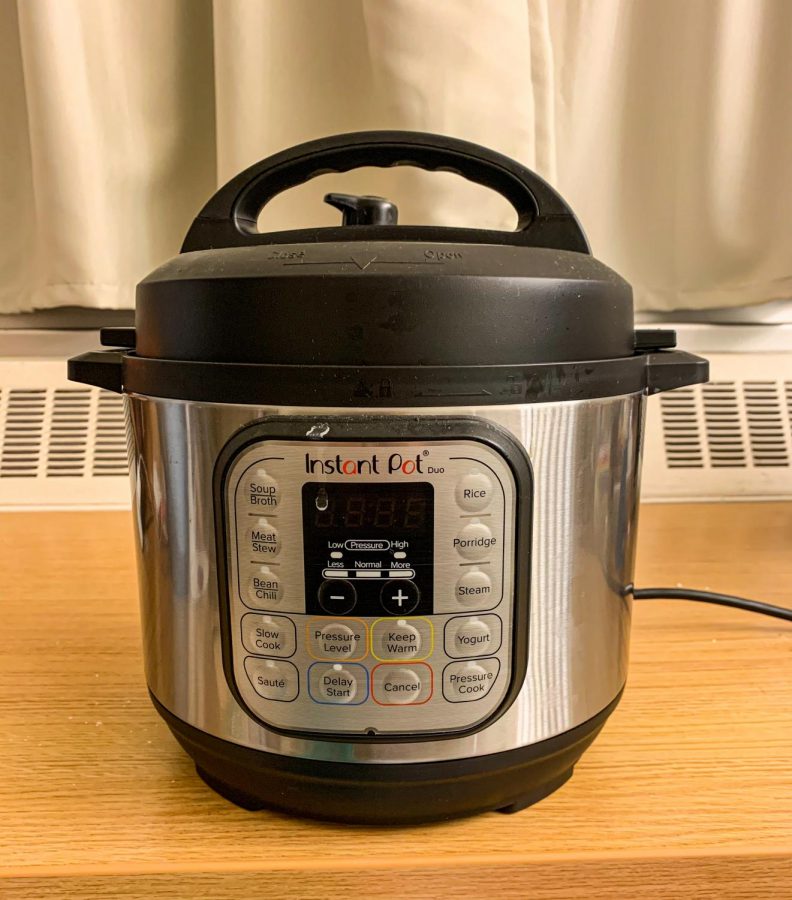 An instant pot is a great way to make spaghetti or chicken teriyaki.

It’s time to dust off your Instant Pot and make some delicious fall comfort food.

If you’re getting tired of dining hall food, there’s a cooking device that can cook your meals in your room. The Instant Pot is a pressure cooker that cooks food significantly quicker than other traditional cooking methods like an oven or stovetop. The dorm rooms can have pressure cookers that are 3 quarts or smaller.

The Instant Pot creates heat under a tight seal, according to NBC News. Due to the seal, the temperature in the pot is significantly higher than the water boiling point and the steam stays in the pot, cooking the food.

The Instant Pot has four components, according to the Instant Pot website. There’s the inner pot made of metal or aluminum steel, which can be removed filled with the food.

Another component is the lid lock. Once you’ve put the food you want into the inner pot, the lid is placed onto the Instant Pot. The lid and inner pot create an airtight seal to make sure the air and pressure stay in the pot.

The Instant Pot has a pressure release regulator valve. This valve has two options, sealing and venting. When cooking your food, the valve should be on sealing so that no air can come out. When you are done with cooking, the valve should be moved to venting. The air will begin to rush out so that there isn’t as much pressure in the pot.

The last part of the Instant Pot is the outer pot itself. This part has the temperature sensor, pressure sensor, heating element and control panel where you select what feature you’d like to use on the Instant Pot.

Below are two recipes you can create with the instant pot.

Dice the chicken into bite-size pieces and add to the bottom of the inner pot.
Add carrots or broccoli on top of the raw chicken, if wanted.
Add ½ cup rice on top.
Pour ½ cup water into the inner pot. Make sure all the rice is covered in water.
Set the lid on and make sure the release regulator valve is set to seal.
Hit the pressure cook button. Make sure it’s set on high and set the timer for 10 minutes.
When the 10 minutes are complete, have the food cook for another 10 minutes.
Release the valve so that it’s on venting.
Put teriyaki sauce on and enjoy.

Spaghetti noodles (amount is up to you)
Water to cover the noodles
What you like to have with your spaghetti after it’s cooked (butter, salt, spaghetti sauce, parmesan cheese, etc.)

Break the spaghetti noodles in half and layer them criss-cross in the inner pot.
Add water until all the noodles are covered in water.
Set the lid on and make sure the release regulator valve is set to seal.
Hit the pressure cook button. Make sure it’s set on high and set the timer for 5 minutes.
After 5 minutes, release the vent.
Strain the noodles from the water and enjoy.