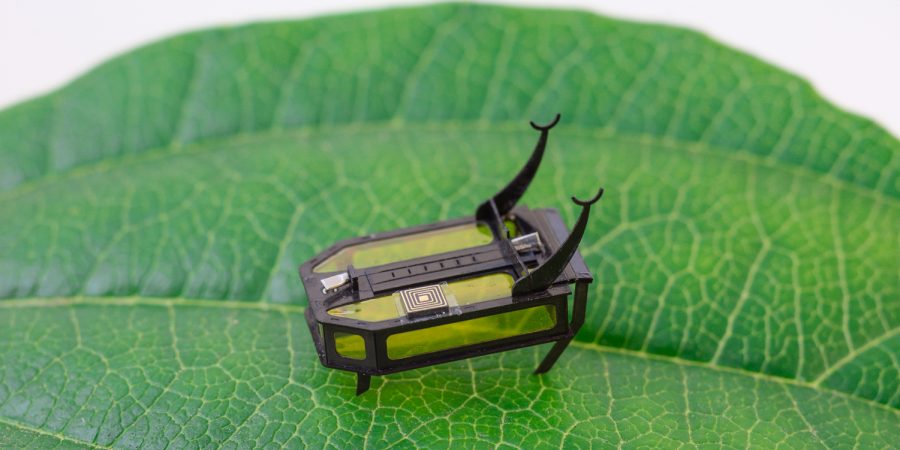 RoBeetle is a centimeter long and weighs 88 miligrams.

A WSU professor created the world’s smallest robot powered by methanol combustion and a shape-memory alloy.

The robot, named RoBeetle, is a proof of concept created by Nestor Perez-Arancibia, associate engineering professor at the Voiland College of Engineering and Architecture.

RoBeetle is about a centimeter long and weighs 88 milligrams, Perez-Arancibia said. RoBeetle has artificial muscles powered by methanol combustion that occurs when methanol reacts with oxygen creating heat. Heat is the energy allowing RoBeetle to move.

Platinum, which is part of a nickel-titanium-platinum composite wire in RoBeetle, acts as a catalyst during the methanol combustion, he said. This allows the reaction to happen more quickly.

“We’re using a source of energy that is highly dense, so we can actually make it autonomous and make it work for long periods of times,” he said.

The movement operates that same way as a human muscle when it expands and contracts. Because the reaction is happening continuously, the RoBeetle continues to move forward, Perez-Arancibia said.

RoBeetle took about two years to develop, but the technology that made it possible began developing 30 years ago. Previous research helped decide the materials chosen and the way RoBeetle moves, he said.

RoBeetle has many different potential applications, Perez-Arancibia said. It could be used for search and rescue or pollination. Instead of sending a group of people into the rubble of a destroyed building, tiny robots could be sent to find people. When natural insects are not available, tiny robots can be used to pollinate crops.

Currently, Perez-Arancibia is working on developing more complicated tiny robots. RoBeetle is a proof of concept, which shows that a robot can use catalytic combustion to power itself. He said he is also working on other small robots that can do more complicated things like follow a trajectory.

Although RoBeetle has many possible practical applications, Perez-Aracibia said he is not interested in developing the robot commercially. Instead, he wants to further develop robotics so it would be possible for tiny robots to do complex tasks.

“But that is something that obviously is going to come,” he said. “ Yes, maybe some of my students … will want to follow that path, but I don’t want to do that, personally. I just want to develop the technology for that to happen.”

Currently, Perez-Arancibia is looking for students to work with him in his lab to continue developing the technology. Interested students can contact him at n.perezarancibia@wsu.edu for more information.