Is media urgency worth our stress?

Students can choose between being afraid, being resigned 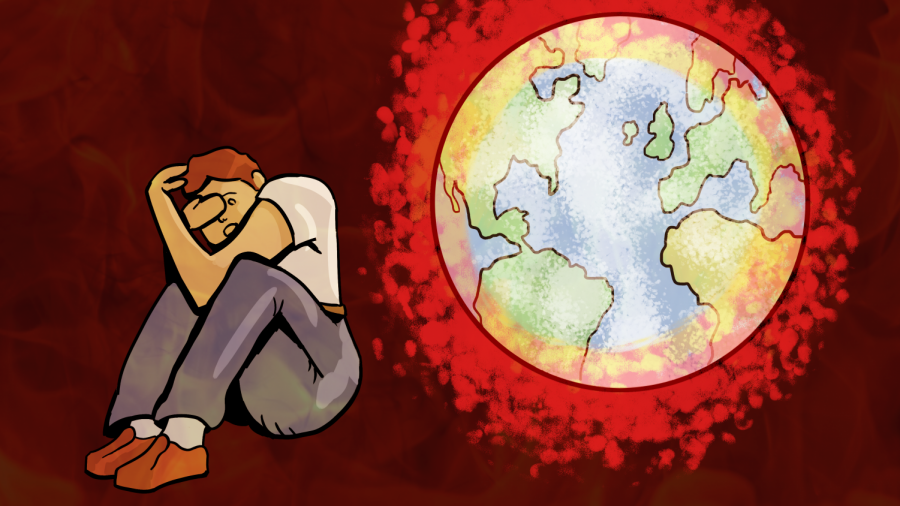 The reality of ensuing dangers on our planet is something we should educate ourselves on. But should we let it consumer our lives?

It is understandable that college students want to live the next few years carefree. If they do want to worry about anything, it is usually about something in the near future.

I mirror the same sentiment myself. I would much rather worry about homework or my social endeavors as opposed to something that is bound to happen in the distant future.

Then the mass media comes along and fills everyone with panic. Are we heading for another world war, or worse, a nuclear world war? Will climate change kill us all?

Even the less likely scenarios (for this generation, at least) are broadcasted: overpopulation, giant asteroids or — God forbid — another deadly pandemic.

I am not suggesting people should be thinking about this stuff every hour on the hour. It would be unhealthy to constantly be immersed in worry and despair. But maybe there should be more attention brought to these catastrophes and what might cause them.

There has been significant progress made toward mitigating or avoiding these disasters in society as a whole. The U.S. government is paying vast amounts of attention to climate change including lawmakers, governors and President Joe Biden himself.

We are working to maintain peace with other nations. Health and monitoring potential viruses is becoming more of a priority within agencies like the World Health Organization.

Tackling these issues requires a collaborative effort. It certainly takes lawmakers and giant corporations – the same ones who are the catalyst for many of these issues — to spark change. But it also requires cultural change in general.

“Climate change is the least of our worries,” she said. “If a volcanic eruption occurs, or if the [tectonic] plates slip even more, we could end up with ‘the big one’ that everyone is assuming will happen.”

Carrion said she thinks about instances like these almost every day. However, she also pays attention to some of the more pressing issues as well.

“When I first thought about coming to WSU, I looked at what they were doing for climate change and how close we were to a volcano,” she said. “It controlled some of my actions, like I try not to go to places that are big contributors to climate change or those who don’t really care about our environment.”

When talking with Carrion, I asked her about whether she feels — at least regarding preventable catastrophes — that college students are potential leaders in the fight. She agreed and said that it is up to generations who can run for office soon to make big changes.

But not everyone chooses to focus on issues as frequently as her. Kaia Lindstrand, freshman accounting and business economics major, prefers to live in the here and now.

“I don’t like to dwell on something that’s futuristic,” she said. “I just kind of believe in taking it one step at a time.”

Lindstrand believes some of the catastrophes at stake are inevitable and not much can be done about them. While she agrees it is important to have awareness over situations, she said it is a waste of time to constantly worry about them.

“You should definitely fight for what you believe in, and you should definitely take a stand for things that you think can be changed,” she said. “But people get too caught up in trying to change stuff that is essentially already kind of written in stone.”

This issue has two common viewpoints: thinking about it every day and accepting that things cannot be fixed. To me, this is better than living in a spectrum between overt fear and complete denial.

It is unanimous within the scientific community, for example, that we cannot reverse some of the adverse effects of climate change. The only fighting that humanity is doing at this point is preventing the situation from getting worse. We also cannot control whether or not a country attacks us, even if America’s leaders fight for peace.

On top of that, I disagree that we should worry about disasters every single day when they start to influence our actions and take us away from the here and now. Saving the planet means absolutely nothing if we are not also taking care of our personal life because then you still end up with some level of adversity.

But I also disagree that we should resign ourselves to the fact that some things are inevitable. A lot of humanity’s issues, from human rights to mental health stigmatization, take generations of large-scale collaborative efforts from people all around the world to change for the better.

Ultimately, the more people that are involved with the fight for the future, the less we will have to discuss being worried down the road.