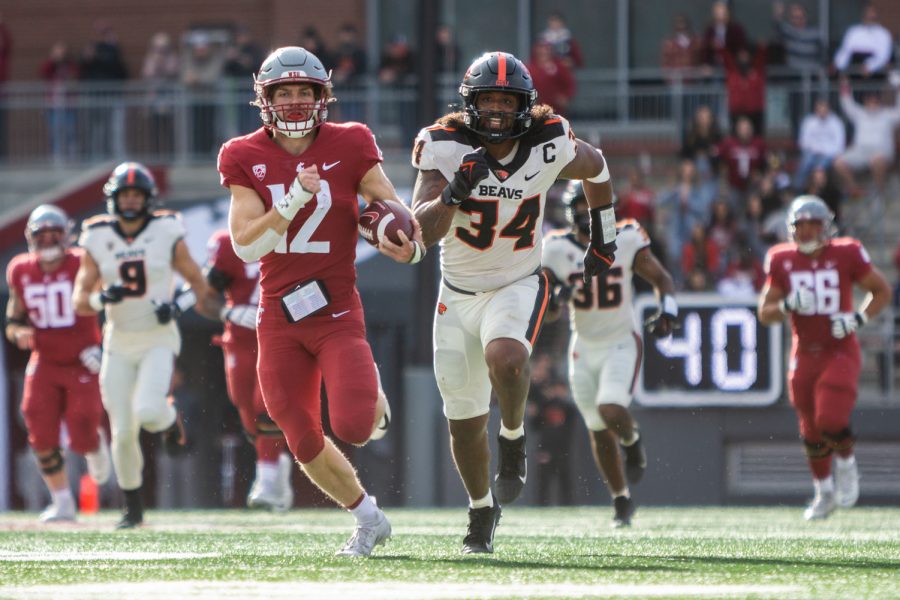 Overall, this is the craziest college football season since the 2007 season with upsets left and right and a very unstable Top 25 ranking.

I really need to stop saying that the previous week of college football is crazy, because someway, somehow, each week tops it.

In the Pac-12, for once, the craziness and unpredictability ended up not being too radical, but then again, Utah got their first win at USC for the first time since 1916, and WSU held on to their winning streak against Oregon State.

We enter the second half of the regular season in the Pac-12 with no clue who the winner of the conference is. With that being said, here are my rankings for week seven of the Pac-12 football season.

Oregon is coming off of a needed bye this past week. They, unfortunately, lost star junior running back CJ Verdell for the season with a knee injury, so the Ducks will have to adjust their offensive scheme if they want to make it out alive in a now-crowded Pac-12 North division.

This Sun Devils team looks really scary. Arizona State’s defense is really clicking on all cylinders, only allowing Stanford to run the ball for a total of 13 yards and snatching three interceptions in the process. Stopping the main offensive attack for Stanford, which is the run, was the main key to success. Their dynamic offense as well, rushing for 255 yards against Stanford, proved this team will look to be the favorite in the Pac-12 South division.

Next game: 7 p.m. Saturday at Utah on ESPN

The Bruins needed a recovery win after losing at home to ASU, and that is exactly what happened, winning at Arizona this past week. Despite the passing game not existing for UCLA last weekend, 329 rushing yards literally and physically carried them to victory, a victory that was needed to get them back in the Pac-12 South division race. Redshirt senior running back Brittain Brown and junior running back Zach Charbonnet both carried the ball for over 100 yards against a weak Arizona run defense.

Next game: 5:30 p.m. Saturday at Washington on FOX

The Beavers had a tough loss on the road against WSU with a shaky secondary that made WSU sophomore quarterback Jayden de Laura look like the next Heisman winner in the second half. The run game for OSU ran all over WSU’s run defense, totaling over 300 yards on the ground, but a collapse in the pass defense for the Beavers was the demise for any success on the Palouse. The Beavers still played a very close game, however, but whatever is going on in the secondary needs to be addressed immediately if they want that bowl bid.

The Utes came into Los Angeles and put down a beating against USC, especially with sophomore quarterback Cameron Rising having the best game of his career. He put up 306 passing yards with three touchdowns after completing 22 of 28 passes. Utah’s offense was just clicking everywhere, even with the run, where they put up 180 yards on the ground as well. The Utes came out of their bye week needing a good offensive showing, and that’s exactly what happened.

Next game: 7 p.m. Saturday vs. Arizona State on ESPN

The inconsistencies for the Cardinal showed once again. After an amazing win at home against Oregon, they only put 10 points up on the road against Arizona State and lose in an upsetting fashion. The offense for Stanford seemed nonexistent and could not find any groove against the Sun Devils, totaling 13 rushing yards as a team. The passing game seemed to struggle, with sophomore quarterback Tanner McKee throwing three interceptions trying to crawl back into the game. Stanford needs to stop being inconsistent if they want a bid for a bowl game.

The Cougars got a huge upset at home against a run-heavy Oregon State team that definitely tested them throughout the game. The passing game was one of the key reasons WSU was able to complete the shocker on the Palouse, with de Laura throwing for 399 yards and three touchdowns while completing 32 of 46 passes. A couple of big stops, along with some very clutch turnovers, helped lift this 2-3 team back to .500 as they head into the latter half of the season — a big win for a team that has plenty of questions surrounding the program.

I am now convinced the Trojans are only good on the road but do not know how to play good football when they have home games in the Coliseum. In their last two home games, USC has allowed 87 total points to their opponents but somehow have dominated on the road. The Trojans were favorites to win the conference and now find themselves on the brink of bowl eligibility at 3-3 with a bad track of losing at home. They need to figure out the problem in the defense so they can fix whatever is going on.

The Huskies are coming off of a needed bye week after losing a couple of weeks ago to Oregon State on the road. If Washington still wants to compete for bowl eligibility and a shot at the North title, they need to figure out what is going on at the quarterback position.

Like the Huskies, the Golden Bears are coming off a needed bye after a week where they scored a season-low six points at home against WSU. The Golden Bears cannot rely solely on redshirt senior quarterback Chase Garbers to carry this offense on his back. Cal needs help in the run game, especially when the passing game is being shut down.

The Buffaloes are also coming off a bye where they need to fix whatever offensive issues they have in general. Not being able to score more than 14 points has been a struggle after week one, where they beat Northern Colorado 35-7. Colorado needs to move the ball down the field better and find whatever offense they have so they avoid the bottom of the Pac-12.

The Wildcats are in a rebuilding position, where this is trial year one of the rebuilding process for this team. A shaky game at home against UCLA this past weekend proves my point exactly, with second-half struggles once again. UCLA only had a 14-13 lead against Arizona at halftime, but then the collapse started, being outscored 20-3 in the second half. This team seems to only be a first-half team. Now, losing sophomore quarterback Jordan McCloud with a season-ending knee injury makes things even tougher. Good luck Arizona, you are going to need it.