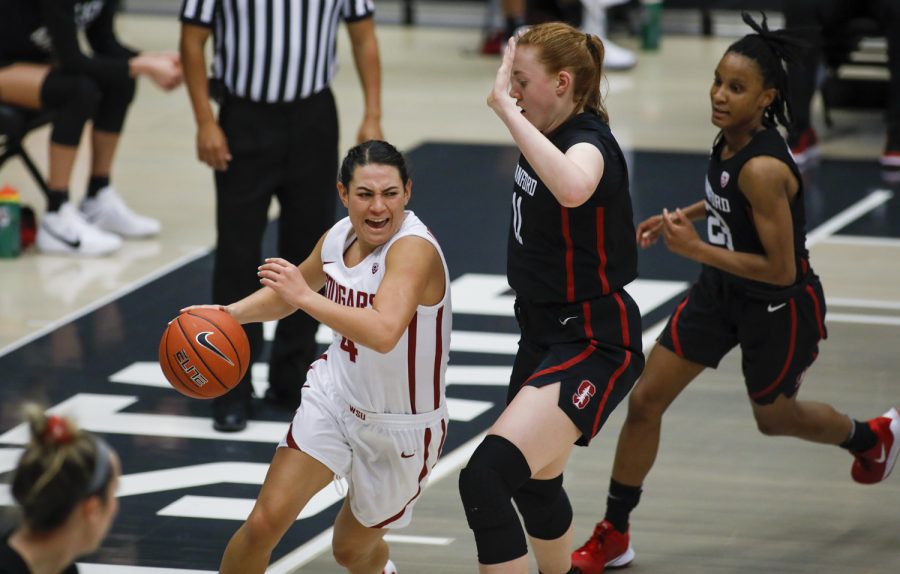 Guard Krystal Leger-Walker dribbles in front of a defender.

The Cougars are coming off of one of the best seasons in school history last year as they earned an at-large bid into the NCAA Tournament in 2020-21 and earned the program’s first AP top-25 ranking.

The chemistry that sisters Charlisse and Krystal share on the court really helps the Cougar’s chemistry off the court as well.

“We look at each other as best friends, and we definitely know each other strengths and weaknesses,” Charlisse said.

Last season, Charlisse was the leader in points and steals for the Cougars. This season, she looks to take more of a leadership role.

“It’s a great spot to be in. Very thankful to have Krystal coming back, and the chemistry is great between the two,” Ethridge said of the two sisters.

Throughout the meeting, the sisters and Ethridge all had one thing in common: a desire to reach the goals the team set for the season.

“It’s the attention to detail and not to rely on talent,” Ethridge said. “We need to be focused on our goals this year to develop as a team.”

“It was a big point in our season, and we felt relief to know that we managed to secure a spot,” Ethridge said. “It was a statement, and it needs to be something we want to accomplish for our team each year.”

With the second NCAA Tournament appearance, two wins versus top 10 opponents (No. 5 UCLA and No. 7 Arizona) and 12 wins last season, the Cougars do not plan to slow down but raise up the standards even higher for the 2021-22 season.