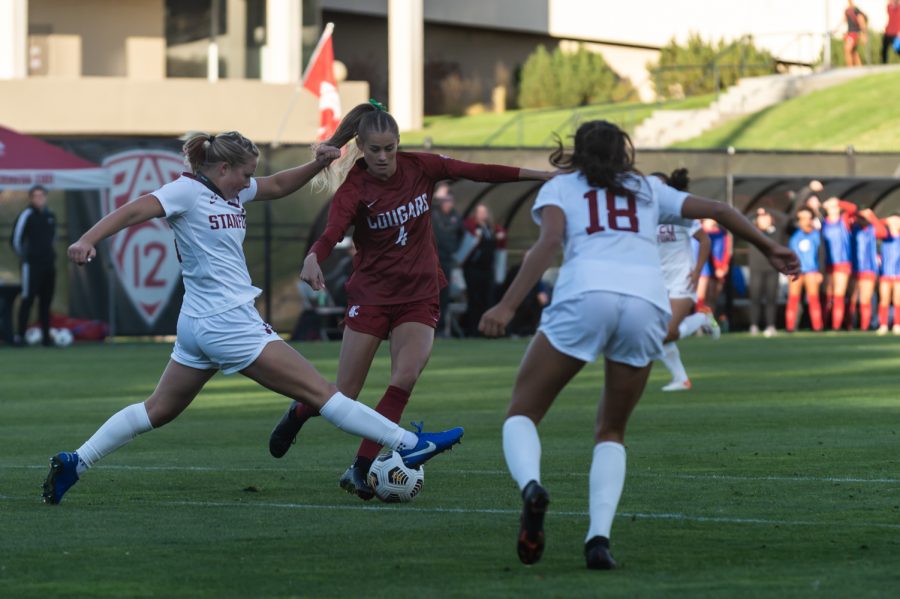 WSU soccer is on the road again to play fellow Pac-12 rival Arizona State at 7 p.m. Friday in Tempe, Arizona, at the Sun Devil Soccer Stadium. WSU currently has a 10-2-1 overall record and a 4-1-0 conference record. Their last match was a 2-0 win against California on Sunday.

“I did love our response on Sunday,” head coach Todd Shulenberger said. “Great bounce back against a very good Cal team who’s young, energetic and is going to be a really solid team down the road here.”

Arizona State has not seen a winning game since Sept. 17 when they played against Colorado College and secured a 1-0 win. Since then, the Sun Devils have tied one game and lost four straight games, all against Pac-12 contenders.

Arizona State currently has an 8-5-1 overall record and a 0-4-1 record in conference play. Despite their tough record this season, the Sun Devils have a winning 13-10-2 record against WSU. Their last matchup was before the pandemic in October 2019, where the game ended in a 0-0 tie in Pullman.

During the last matchup, the Cougars were in complete control of the game until the last 20 minutes, allowing just four attempts on goal while peppering the Arizona State defense with 27 shots. Despite the many shots, Sun Devil goalkeeper Giulia Cascapera would not allow any to hit the back of the net.

Seven other Arizona State players also attempted shots in the game against the Ducks. Arizona State attempted 11 shots and eight shots on goal during the game. Both teams played aggressively, with nine fouls being given out to each team.

It was senior forward Kess Elmore who would score the game-winning goal for the Ducks and continue Arizona State’s losing record. The Sun Devils are currently ranked second to last in the Pac-12 ahead of only Arizona.

WSU is currently tied for second in the conference with Stanford. USC is currently undefeated in their first five conference games in the Pac-12. Shulenberger said Arizona State should be playing better.

“They’re not getting the results they deserve right now, I think,” he said. ”They were an NCAA tournament team last year. A good team, they’re going to be organized defensively.”

Do not miss out on the cougar action. The game can be viewed on the Pac-12 Network with stats by StatBroadcast.