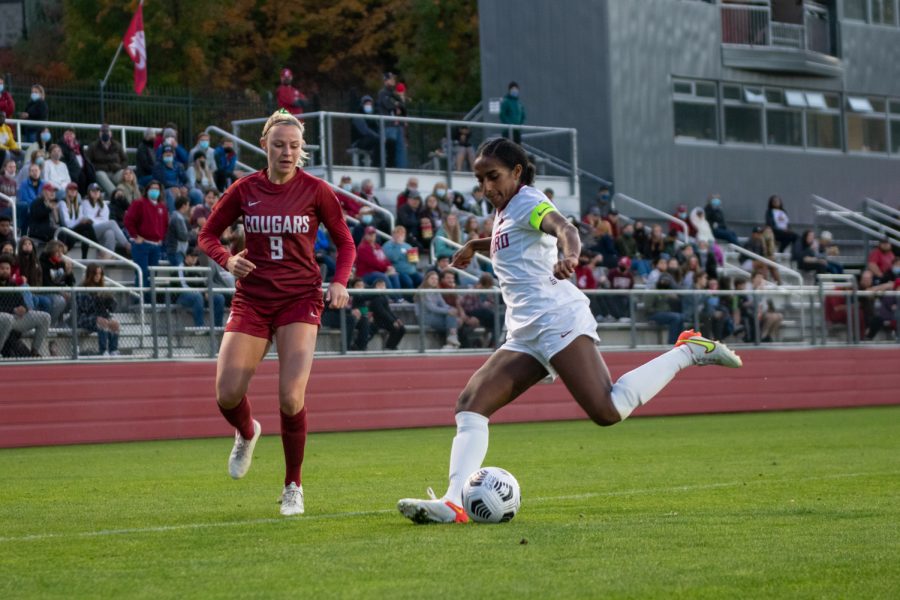 Only one person can hold the record for overall games played for WSU soccer.

That person is Sydney Pulver, fifth-year phenom and quiet leader on the soccer team. Pulver has played 90 matches for the Cougs in her career and scored in three games this season, including two game-winners.

“She’s consistent, that’s for sure,” head coach Todd Shulenberger said. “Sydney is one of the most steady players that we got. We can count on her day in and day out. When she’s on, she’s on your going to know it.”

Pulver started playing soccer with her sister when she was 4 years old. She continued to play it growing up. She fell in love with the game and made a lot of friends through the sport.  Pulver said she decided to commit to WSU because she loves the Pacific Northwest, Pullman, the campus and the coaching staff.

Soccer has been going really well on the field this season, Pulver said. However, that dynamic goes beyond soccer matches and extends off the field. The soccer team hangs out with each other outside of practice and is always there for each other.

Pulver has just a little bit of time left to create more memories with the soccer team as her career is coming to a close. She said she has had a great experience at WSU, has made many friends and wouldn’t trade her time with the Cougars for the world.

Pulver said she is happy with her accomplishment as a leader in matches played for the Cougars.

“It’s super exciting. I mean, I’ve worked hard from day one,” she said. “So I think it’s just like a really big accomplishment for me, but I have been very fortunate that I’ve been healthy throughout most of my career, so I’m very grateful for that.”

Pulver said one of her favorite memories with the team was playing in the Final Four in 2019. That was a great accomplishment, but Pulver does not want to rest on her laurels. The team has big goals this year as well. They want to finish first in the Pac-12, and Pulver thinks it is possible the team could make it to the Final Four again.

Junior midfielder Grayson Lynch is Pulver’s best friend and teammate. The two are both from Colorado and played for the same club team growing up. Lynch said the two did not really know each other until college, but once she came to WSU, they became friends.

“I think freshmen year, she was someone that I hung out with,” Lynch said. “She kind of brought me out of my comfort zone and brought me to different things, and I just hung out with her from the beginning, and I think it’s just grown over time.”

Lynch said that Pulver shows up every day, works hard and does what she is supposed to do. Pulver leads by example and will keep teammates accountable when they are not doing what they are supposed to do.

“She’s a great young lady,” he said. “Great teammate. The girls really admire her. Again, very quiet to herself, but people look up to Syd, and you can always count on her as a friend.”

Leadership is not always loud. Pulver leads the team without saying too much or yelling, Lynch said. Pulver gets fellow teammates to match her intensity. Pulver also has a great attitude. She is energetic and finds joy in every little thing she does. She does not let the tough times get her down, either.

Pulver is a friend to everyone on the team, Lynch said. She is someone that everyone looks up to and everyone can rely on.  Everyone appreciates her personality and was glad when she decided to stay an extra year. Pulver is inclusive of everyone and includes the freshman despite being older than them.

Graduation has already visited Pulver, and she said she is currently working on her MBA. The MBA fits well with her undergraduate double major in business management and finance.

She is unsure what her future holds, but no matter what she does, Pulver said she will pursue it with the same tenacity she has for everything.