Cougs look to chop down Cardinal 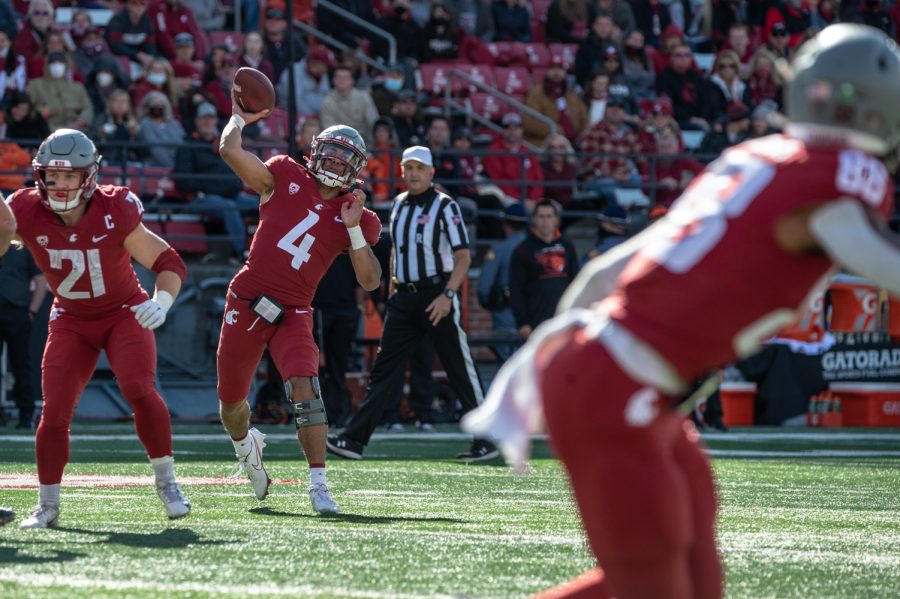 No game is an easy one, as we have seen this season, especially not conference games. This weekend is no different.

On Saturday, the Cougs will host Stanford inside Martin Stadium. A family weekend showdown for the Cougars presents a relatively even competition between the two teams.

Currently, the Cardinal are listed as a 1.5-point favorite, and ESPN’s Football Power Index gives Stanford a 57.9 percent chance to win the game.

Historically, Stanford has had the better of WSU, picking up a 40-29-1 record all-time against the Cougs. However, things have swung in favor of WSU recently, with the Cougs earning four straight victories in the series, three of which have seen WSU score more than 40 points.

WSU currently sits ninth in overall grades in the Pac-12, according to Pro Football Focus. The same grade puts Stanford in 10th.

Offensively, Stanford will almost certainly look to attack the Cougs through the air. Pro Football Focus grades the Cardinal as the sixth-best passing offense with the third-best receiving corp. WSU’s pass defense has been good enough this season but certainly has not been the best.

Stanford’s quarterback Tanner McKee will be one of the Cardinal’s most important players. If they want to win the game, it will come down to McKee and his offensive line making the plays they need to make.

“They’re throwing the ball more than you would think a stereotypical Stanford team would do,” head coach Nick Rolovich said. “The quarterback is talented. They’ve got good size throughout the roster, size at pass catcher.”

When the line is able to give McKee a clean pocket, he is able to put up some great performances with nine of 12 touchdowns this season coming on these plays. However, when he is under pressure, things go south fast.

When his pocket gets a little messy, McKee’s percentage of turnover-worthy passes jumps from 1.2 percent to 7.1 percent. That is not to say that WSU needs to blitz on every down though. McKee has actually been relatively solid against blitzes this season, 58.3 percent of passes and scoring eight passing touchdowns.

The offensive line has done a phenomenal job of picking up blitzes and giving the quarterback time to find a receiver downfield in looser coverage.

The Cougars will rely heavily on Ron Stone Jr. and Brennan Jackson to get pressure on McKee. Armani Marsh and George Hicks III will be key pieces in the secondary, trying to slow down to aerial attack.

On the other side of things, the Cougar offense came alive in the second half last week against Oregon State. Quarterback Jayden de Laura was a big part of that, with arguably the best performance of his career.

“He’s making people around him better,” Rolovich said. “I think he is in the moment. I think he is letting negative things roll of his shoulders better. That’s all part of growing.”

De Laura completed 69.6 percent of his passes for 399 yards and three touchdowns. This was in large part because of his time in the pocket.

“I thought the offensive line pass protected their butts off,” Rolovich said. “That was a really nice job.”

The passing game will always be important for WSU football. This week is no different.

Stanford is currently giving up less than a passing touchdown per game this season. This is partially because teams are running it an average of more than 40 times per game compared to 29 passing attempts per game. If WSU can effectively attack the Stanford secondary, the Cougs will put themselves in a good position to win the game.

“We weren’t connecting the way we were anticipating,” Rolovich said about his wide receivers. “It was really good for them to have that second half, playing with some confidence and some trust.”

At this point in the season, Deon McIntosh might be the second most important player on the Cougar offense. Max Borghi still has more rushing yards and touchdowns, but McIntosh is not far behind at all. McIntosh currently grades higher in the rushing grade and has the exact same pass-blocking grade compared to Borghi, according to Pro Football Focus.

McIntosh seems to be able to find holes that do not exist otherwise. This will be super important, as Stanford’s rush defense has struggled more than their pass defense has so far this season. If Borghi and McIntosh can get things going, the Cardinal will be in a very tough spot.

The Cougars come in as slight underdogs, but riding a two-game winning streak and playing in front of a home crowd on family weekend could be the equalizers in this game.

WSU and Stanford kick-off at 4:30 p.m. Saturday. The game will be televised on ESPNU for anyone that can not be in attendance.