What are we leaving behind?

Ethical eating, shopping are easy steps to protect our planet 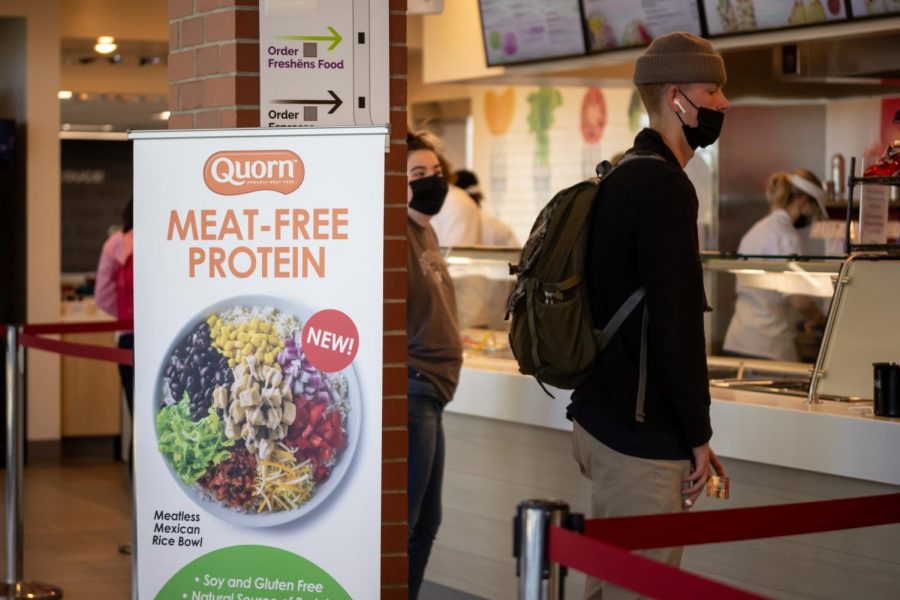 WSU students order food from Freshens on Oct. 11 in Pullman.

Have you noticed every summer in Washington is the hottest summer yet? Even in Pullman, we see 100-degree weather. This phenomenon is unusual and ultimately linked to climate change.

In the past hundred years, the use of fossil fuels (the main contributor to climate change) has gone up tremendously. It makes plastic waste look like a minor problem. But both are issues us Cougs can do something about.

The issue of saving our environment is something I am passionate about. I have been vegan for over three years for many reasons, but mainly to reduce my carbon footprint.

We can change things individually as students to reduce the overall emissions created by humans. It starts with our carbon footprint — how many greenhouse gasses we produce personally.

I have learned a lot about what I am doing for the environment with decisions like these. I have saved over 1.4 million gallons of water and 25 thousand tons of carbon dioxide, according to a website called the Vegan Calculator.

It may not seem like much considering every year we produce 43 billion tons of carbon dioxide. In Washington alone, we produce around 10,000 metric tons.

14.5 percent of man-made emissions come from the meat industry. The biggest contributor is the beef industry, so why not start skipping some of your intake on beef?

“It’s our responsibility as humans to take care of the earth for future generations,” Stevens said.

If we do not act now, it will be too late for the future.

Every single Coug can do something to reduce their carbon footprint, from shopping ethically to reducing the meat we buy occasionally. It is an easy task that has a long-term effect.

WSU alumni Josie Sellers said she produced a thesis around being environmentally friendly and the benefits of eating less meat.

Sellers said she created a model to test how many emissions you are using based on the amount of meat you consume.

I recommend you click the link and fill out your own intakes. See what you are willing to reduce to be a more “carbon neutral” human being.

Some may argue with me about how “drinking almond milk is not conscious enough” because of the water waste created by its production. I agree that it is not enough.

However, I am still doing more than the average person who will argue instead of taking action themselves. Our environment should be as important to care for as our own health.

Plenty of research has been done to support the statement that eating less meat will reduce your carbon footprint.

On campus and in Pullman, we have many meatless options in dining halls or even at the cafes. Being open-minded to trying these alternatives is a great start to helping our environment.

Whether we want to admit it or not, we are using so many resources that the Earth cannot regenerate more.

Every year, we have Earth Overshoot Day, a day that marks when humanity surpasses the ecological resources alotted for each year that would allow the planet to regenerate enough for the next year.

This is mind-blowing, and yet people still think we do not have a serious issue.

A lot of what we cannot control is occurring because of major corporations, but we can vote locally to demand change from our government. Starting small can lead to big changes.

“I would recommend people making small changes, such as being conscious instead of wasteful,” Lund said.

How can one be conscious instead of wasteful? It is simple really, taking the time to see where you buy your clothes, how much meat you eat, how much plastic you use, can be a start.

Clothing brands such as Zara, Urban Outfitters, Forever 21 and many others support the creation of “fast fashion.”

These brands choose to use unsustainable materials and treat those who do their labor unfairly, just to mass-produce cheap products. Fast fashion releases 1.2 billion tons of emissions per year.

A well-known app, TikTok, is bringing a lot of attention to Shein, a fast fashion company that is not only terrible to their workers but also terrible to the environment. Because of the app’s wide influence, viewers are buying from this company more than ever.

Cheap clothes that last less than six months are not worth harming our environment.

Another alternative to fast fashion is buying secondhand clothes; it can impact a lot. I know the Goodwill in Moscow is a great place to buy clothes. They always have some good staple Coug shirts.

I constantly wish I had more clothes, but my last resource will be buying from fast fashion. I have taken a stand against it and would rather wear the same clothes every week than support something so terrible.

Being ethical is easy; you do not have to completely transform your lifestyle in order to make a change.

Reducing your purchases in fast fashion and cutting back a couple of meat meals a month can be a great start; it can start with the Coug reading this now.

Do your part and love the Earth.