A dog’s recovery through a ruff time 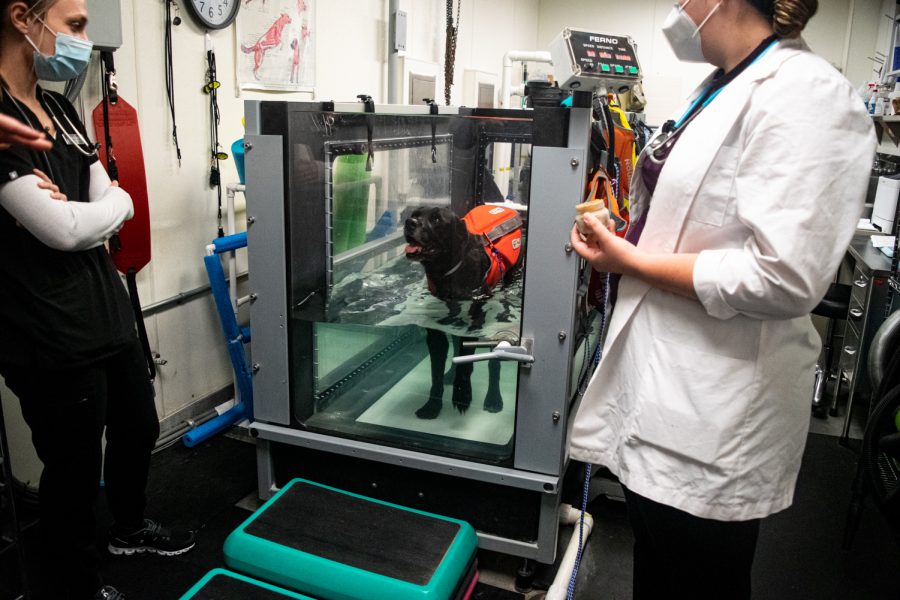 Maddie, a 13-year-old lab mix, is instructed to walk on the underwater treadmill.

Maddie, a 13-year-old lab mix, obtained a fracture in her elbow as a puppy. Her elbow healed, but she later developed arthritis. Thanks to the WSU Veterinary Teaching Hospital, Maddie’s quality of life has been improving since her initial diagnosis.

Maddie receives treatment every week at the hospital. She uses the underwater treadmill to exercise her joints and then receives laser therapy treatment to treat sore areas, said Dr. Jessica Bell, clinical assistant professor at the hospital.

Arthritis is inflammation inside of a joint and can be caused by numerous factors. Most commonly, it is the result of wear and tear, or aging in animals, Bell said. Injuries or diseases can also cause arthritis, like in Maddie’s case.

“Diseases such as tick borne disease, viral infections or bacterial infections, those can also induce early and severe onset of arthritis,” Bell said.

Some breeds of dogs like labradors are more prone to developing arthritis because they have congenital abnormalities that predispose them to a condition called elbow dysplasia, said Dr. Jessica Bunch, veterinarian with WSU’s Integrative Veterinary Medicine Service.

The underwater treadmill allows animals to exercise or work out the areas affected by arthritis, while also taking weight off of the stressed areas because of the buoyancy in the water, Bunch said.

“It is easier for them to move, but they still have the resistance of the water and have to work to get through it,” Bunch said.

In some cases, an animal moves their joints more under water than on land, helping them maintain their range of motion in a structured manner, she said.

Photobiomodulation — or laser therapy— is used to treat pains and decrease inflammation in joints affected by arthritis, she said. The technology uses light energy from photons to increase ATP production, which helps create energy for cellular processes while also increasing circulation of nitric oxide. This increases blood flow and decreases inflammation.

Bunch said animals can often overcompensate when they have arthritis and may obtain other sore areas as well; treatments can help with this.

Before an animal is able to receive veterinary rehabilitation treatments, a veterinarian may recommend other standard courses of treatment, she said. These include weight management, administering pain medications, continuing with regular exercises if possible, or changes in diet to incorporate more omega-three fatty acids.

Bunch said keeping arthritic dogs active is very important. When they first get up, they may be sore, but as they move, their joints will start to feel a little bit better.

“[Maddie’s] mom knew she was going to have problems from the get-go,” Bunch said. “So she kept her lean and really active, so she has managed quite well, given what her elbow was like in the beginning.”

Maddie is also on nonsteroidal antiinflammatories, but sometimes medications are not effective and dogs cannot tolerate them, Bunch said.

For animals that may not tolerate certain treatments, there are also a number of other tools that can be used, Bunch said. These include therapeutic exercises, massages, electromagnetic field therapy and therapeutic ultrasounds.

In addition to rehabilitation services, there are also chiropractic and acupuncture services, she said. Acupuncture and some herbs or joint supplements can also be used for pain management.

It is also important for pet owners to watch their pets for possible signs of arthritis, she said. An animal may not want to go for walks as long, have difficulty getting up or may become lethargic.

Once a pet has been evaluated in a general clinic and diagnosed, they may then be referred to a bigger facility for more advanced treatment options or therapies, Bell said.

Treatments like photobiomodulation and the underwater treadmill are effective, but are not readily available to the general public because they are provided by special facilities, like the teaching hospital, she said.

An animal’s diagnosis and the symptoms they demonstrate are used to prepare the right course of treatment specific to them, Bunch said.

Human and veterinary medicine often parallel, and methods such as weight management, guided changes or pain medications are shared practices, Bell said. Research is shared across both areas.

All of the treatment options began with human medicine techniques, Bunch said. There was initially an interest in bigger animals, such as horses, but then the need moved to smaller animals.

“Some of these modalities and therapies have just kind of slowly developed over time or have been adjusted based on things we’ve seen on the human side,” she said.

All of the rehabilitation treatments are standard and growing in the field of veterinary medicine, she said. A number of universities, including WSU, now have rehabilitation or integrative medicine services.

The integrative services started at WSU five years ago, but the rehabilitation services have been available since roughly 2010, Bunch said.

As research and therapies advance, the hope is that it will also become more available to regular veterinarians in their general practices, she said.

“Research that is being done now and will be done in the near future is going to be crucial in how we manage chronic pain,” Bell said.