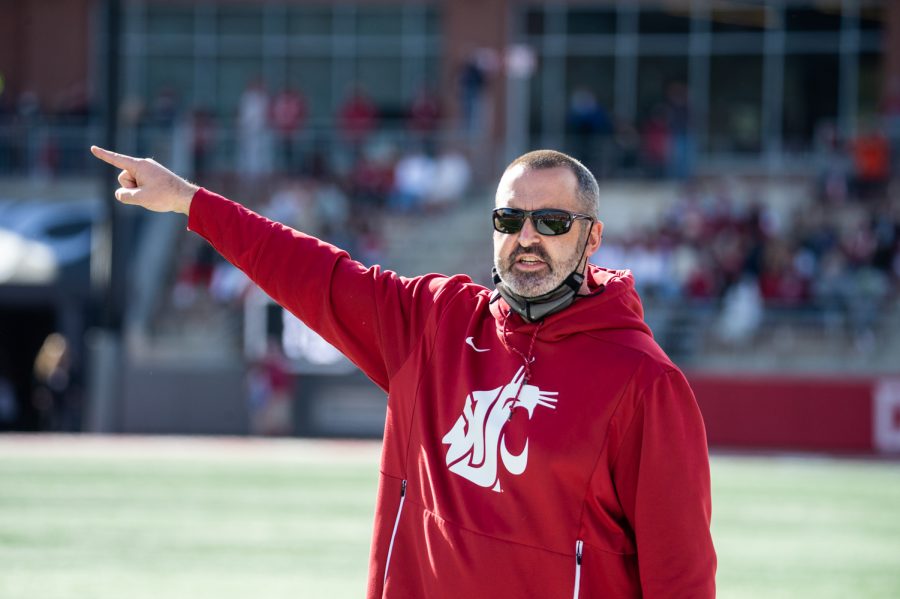 Nick Rolovich was fired from his position as head football coach on Monday.

WSU students are mostly supportive of the university’s decision to fire head football coach Nick Rolovich and four assistant coaches on Monday for refusing to get the COVID-19 vaccine.

Monday marked the vaccination mandate deadline for state employees, which was announced by Gov. Jay Inslee in August.

Junior Levi Corigliano said he thought it was “very much needed” for Rolovich to be fired.

He said certain exemptions, like medical reasons, make sense but refusing to get vaccinated when everyone else at WSU was forced to is not OK.

“It’s not a very cool thing to do,” Corigliano said. “Because the whole campaign is Cougs keep each other safe. And the fact that he didn’t — I feel like Kirk [Schulz] really did what’s needed.”

Senior Sam Lansky said Rolovich’s ousting was not a surprise because the coach was known for avoiding questions about his vaccination status during press interviews.

He said a rule is a rule, so it was fair Rolovich got fired. But Lansky said he thinks there might be unrest within the football team because of the firing.

“I feel like we might see some protests,” Lansky said. “It might be interesting politically here, but I know athletes are very determined to the game, and I feel like they’re just going to adapt with this change, just as they adapt on the field.”

Nick Rolovich was the highest-paid state employee with a five-year $15.6 million contract.

Freshman Nicholas Huntington said he thought Rolvich should have followed the mandates because he should be a role model as the highest-paid employee in the state unless he wanted to “get the door.”

But Huntington said it is sad that WSU is losing a coach, which might make it harder for the football team to perform.

Huntington said he thought Rolovich would get an extension on his vaccine requirement.

Rolovich applied for a religious exemption, according to The Spokesman-Review.

But not all students are supportive of Rolovich’s removal. Sophomore Lucky Ruona said he thought it was a weird time to fire Rolovich.

If Rolovich was going to be fired, it should have happened at the beginning or end of the season, Ruona said.

He said WSU’s decision has devastated some players of the football team.

“I can understand — because we are an institute of science — why he would get fired,” Ruona said. “Like it’s a standard we have to uphold. I understand, but if I was in charge I probably wouldn’t [fire Rolovich].”

Ruona said he believes the football team will rally together and perform even better than before.

Some students, like Junior Nicholas Rooney, said Rolovich should have been fired long ago.

“We should have [had Rolovich], at the very least, agree that he was going to get the vaccine or not,” Rooney said. “So that way we could look for a coach; we could figure things out way before it was even a problem.”

Editor’s Note: The date on this story has been corrected.