WSU clubs showcase aspects of their culture through food, dance 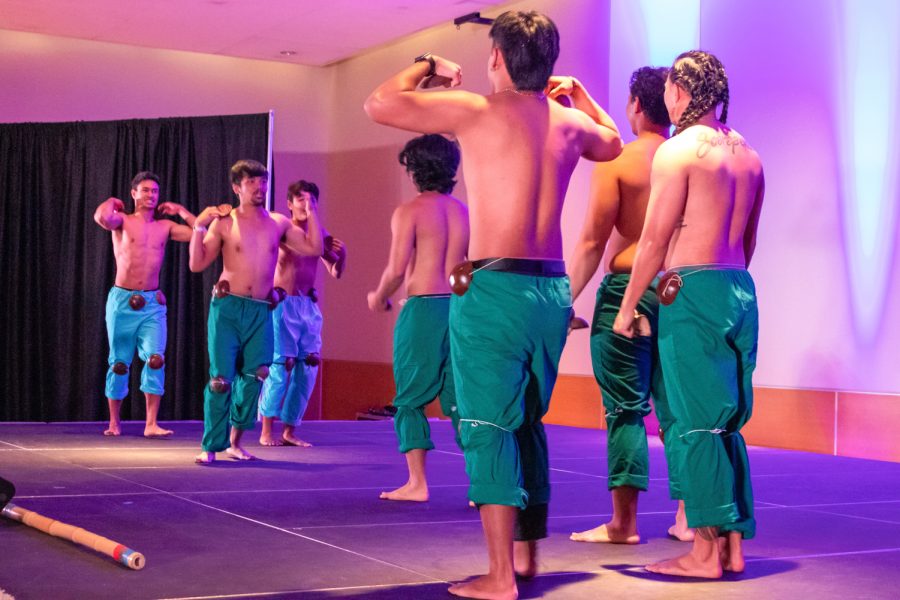 The Filipino American Student Association performs a cultural dance on Oct. 15 for a cultural exhibition.

On Sunday, the Senior Ballroom of the Compton Union Ballroom filled with guests and family as the Pacific Islanders Club, in tandem with other student groups, put on their cultural exhibition “The Binding Of Our Isles.”

The cultural exhibition is an annual event the club hosts to showcase many different cultural groups who call WSU  home. Through food, music, giveaways, educational exhibits and performances, the event showcased an aspect of each group’s culture.

Entering into the CUB’s ballroom, guests were greeted with a well-decorated space, welcoming programs and place settings.

On the right side of the ballroom, a number of tri-folds highlighted cultural groups. On the left side was a line of tables lined with serving trays, the food made for the event smelling delicious as the guests found their seats.

While an educational experience, the exhibition achieves its goals in a fun and memorable way.

All of the food offered was delicious. The options included kalua pork, teriyaki chicken, mixed vegetables, noodles and rice. A standout dessert was banana bread with its crust dipped in cinnamon sugar.

The event wasn’t just about the delicious food, though. Loea Garza-Alisna, the Pacific Islanders Club’s cultural exhibition chair, said the event brought people of different cultures together. There was a wide representation of clubs who participated, including the Filipino American Student Association, Hawai’i Club, WSU Ballet Folklórico and the Pacific Islanders Club.

“It is a really fun time to gather with other people here,” Garza-Alisna said. “Really showcase the authentic part of our culture that we don’t really get to show as much.”

The dances proved an integral part of the event as groups showed off a part of their culture and tradition to the audience. Elijah Ragudo, MC and performer, said it was important to get all the dancers together and acknowledge the hard work they put in with hours of practice.

“The hardest part about setting this all up was getting all the dances executed right,” Ragudo said. “We needed everything on pace so that when the time is right everything falls into place.”

In the midst of the performances and other festivities, the cultural exhibition featured Nicolas Keaoua Kaneakua as the keynote speaker. While each aspect of the exhibition was special in its own way, Kaneakua seemed to tie it together.

“Tonight’s theme is coming together for unity,” Kaneakua said.

The Pacific Islanders club has held the event 19 times. Both Ragudo and Garza-Alisna said it brought them joy to hold the event after COVID-19 had made a similar gathering much more difficult. If anything, holding the event coming off the pandemic seemed to emphasize the theme all the more, as different groups put in hard work to put on the event.

“Being with friends after such a long year and being able to share it with the community was really nice,” WSU junior Jordyn Eleazar. “All the costumes were beautiful and everyone put in hard work to put this on.”

Overall, the event did an amazing job at following through with its theme and goal, showcasing a part of the diverse community at WSU and sharing various cultures.

“Although we come from many different places and groups, community is always one thing,” Ragudo said. “We wanted to teach that family and unity was a big important thing here at WSU.”