Watch out for falling pumpkins 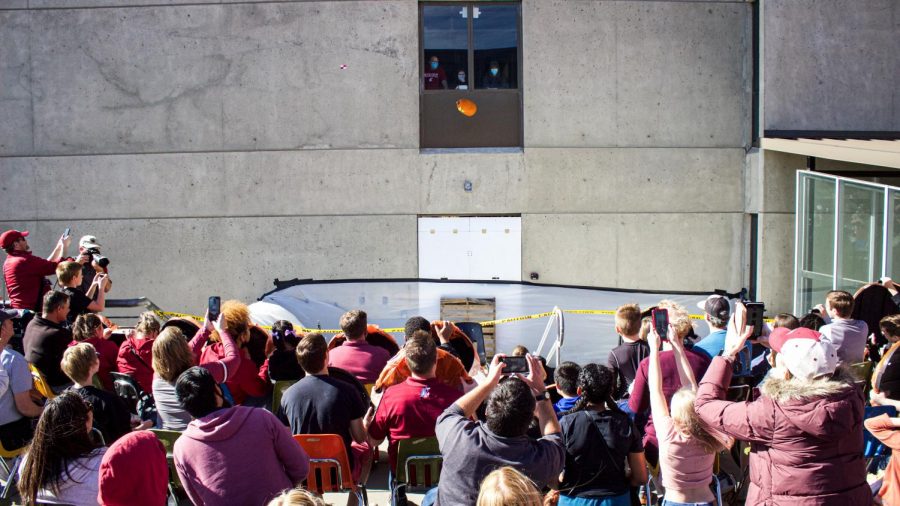 Spectators watch as 13 pumpkins are dropped on Oct. 16 from the twelfth floor of the Webster Physical Science Building.

With a bright buzz in the air and chatter up and down Glenn Terrell Mall, events during WSU’s Family Weekend were in full swing by mid-Saturday morning.

This year, the annual Pumpkin Drop off Webster Physical Sciences Building returned with electric excitement and a bustling crowd. Usually scheduled around Dad’s Weekend, the event was skipped last year because of COVID-19.

At 11 a.m. Saturday, the WSU Physics and Astronomy Club held events inside Webster for all ages, including demonstrations, a space launch game, an arts and crafts section and a laser maze held by the Graduate Physics Club on the seventh floor. Leading up to the pumpkin drop, the demonstration room was packed to the brim.

The main event was held at 1 p.m. outside on the east side of Webster. Club members dropped pumpkins from the highest available point on the 12th floor.

“I did this one for ‘Radioactive.’ It’s this recent movie about Marie Curie; she is this idol of mine,” said Alex Heinrich, president of the club. “We had a lot of really nice paintings this year.”

Students and their families gathered where chairs and a roped-off section had been set up. The roped-off section contained an open staircase leading to French doors on the side of the building; this was the intended drop zone for the pumpkin.

Electric excitement and chatter could be heard from the crowd’s growing anticipation. After an introduction and welcome by Heinrich. The countdown began with a mass of people joining in to kick off the event. Finally, “3!…2!…1!…” and the first painted pumpkin fell down the side of Webster.

On the 13th countdown, the pumpkin was hastily dropped out the window. It hit the ledge of the windowsill, changing its trajectory to outside the drop zone, where the crowd was standing.

With an audible gasp from the crowd, individuals at the front scrambled to move out of the way. The pumpkin landed in between the first and second row of spectators. This is generally where garbage can lid shields are used to protect against pumpkin splatter.

Immediately following the incident, organizers met and declared the 2021 Pumpkin Drop over, Heinrich said. After the event ended, individuals began flooding out of the area, leaving pieces of the pumpkin to be seen amid the scattering of abandoned chairs.

No one was directly hit by the pumpkin, however, medics checked on multiple people when they arrived on scene. Brian Saam, professor and chair of the department of physics and astronomy said no one was seriously injured at the event, and the department deeply regrets the injuries that occurred.

“For an event that has been so safe for so many years, it definitely caught us by surprise,” Heinrich said. “We have the Department of Safety Committee currently out investigating it, and there will undoubtedly be new factors that we will devise and put into action if we do, in fact, get to continue this for future years.”

The safety committee’s investigation will seek to determine what exactly happened, what the response of those department members in authority at the event were and if they were proper and adequate, and what safety measures we need to take to prevent such an accident from reoccurring, Saam said.

The future of the pumpkin drop will be determined at a later date after the investigation has concluded.