Pullman to get a wet winter 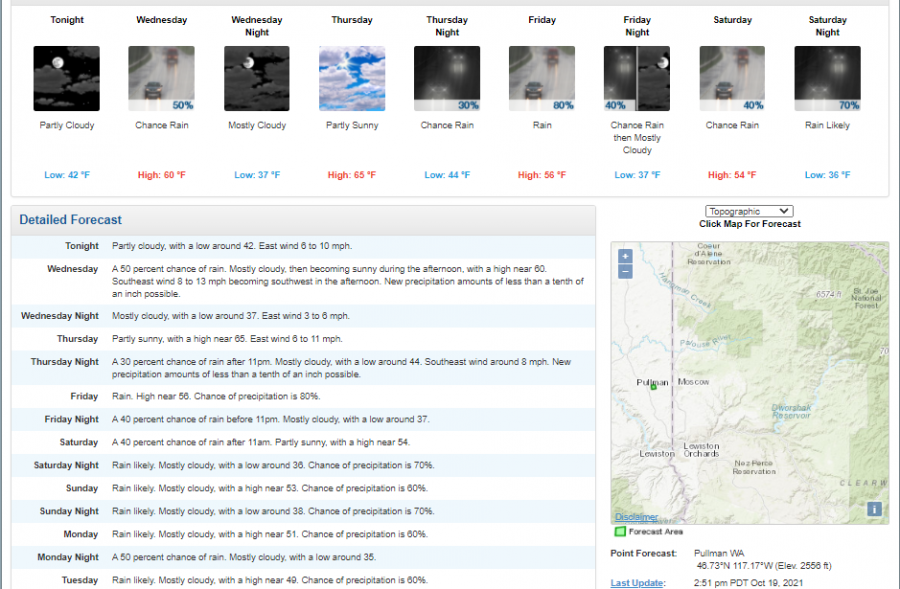 Temperatures will drop throughout the week starting Wednesday, according to the National Weather Service.

Residents in Pullman may be seeing a wet winter in the coming months.

Lower temperatures have been flowing into the region because of La Niña, which is a condition where ocean temperatures are cooler, said Rocco Pelatti, general forecaster for the National Weather Service Spokane.

“What that means is we could end up being wetter and cooler because we have a greater potential to have storms approach from the more favorable northwest,” Pelatti said.

Washington has been in a state of drought this year, according to the National Drought Integrated System.

Pullman has received a total of 8.71 inches of precipitation since Jan. 1, Pelatti said. The city’s normal total by this time of year is 12.38 inches.

In order to avoid another drought in 2022, there would have to be a lot of precipitation and snow this winter season, Pelatti said.

“You want the snow. And you want the snow in the mountains,” he said. “A lot of times the snowpack will really accumulate in the spring. That didn’t happen [this year].”

Weather on the Palouse, especially in Pullman, usually differs from the rest of the Inland Northwest because of its slightly higher elevation, he said.

Weather systems typically approach Pullman from the northwest or the southwest, Pelatti said. This influx of Pacific Ocean air crossing the mountains shapes the region’s weather because systems coming from the northwest have a greater chance of producing precipitation.

The northwest’s cooler temperatures caused snow to fall Oct. 13 in Pullman, he said.

“The snow temperatures were still pretty warm so that’s why it didn’t accumulate,” he said.

Pullman has also still been receiving warmer air currents from the south, which has been causing the mid-60 and 70-degree weather in the region, Pelatti said.

As Pullman’s weather cools down, residents should begin their winter precautions, he said.

“Have adequate and reasonable clothing available for when it changes,” Pelatti said.