Cougs continue to climb, while Oregon holds steady at No. 1 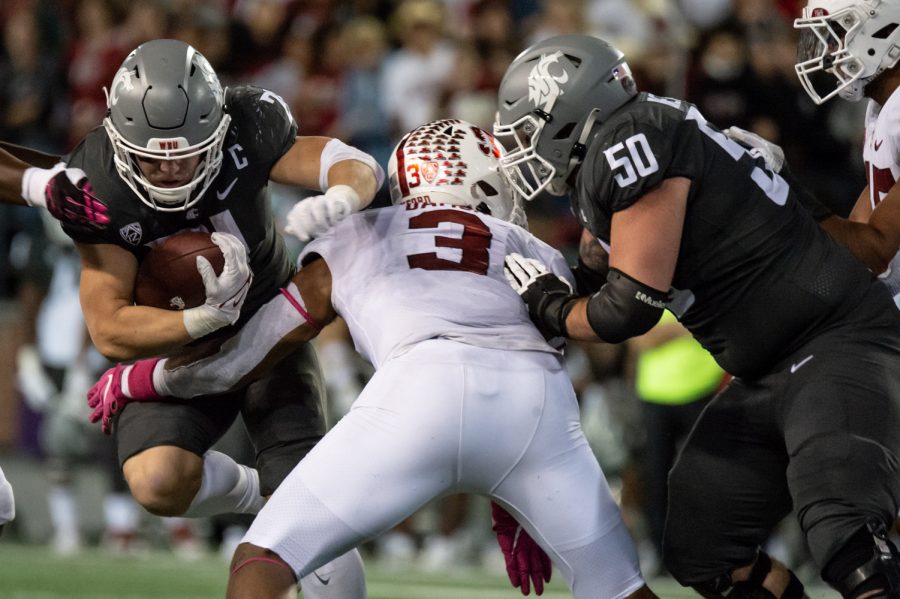 WSU running back Max Borghi (21) rushes the ball during the second half of a college football game Saturday at Martin Stadium.

The Pac-12 conference still is very unpredictable, no surprise there, but this conference seems to be leveling out as the end of the season approaches.

The Ducks still remain at the top. UCLA came into Seattle and left with a win and Arizona is the only Pac-12 team to not score a point this weekend.

As we enter the end of October, here are my Pac-12 power rankings for week eight of the conference.

The Ducks escaped a close loss against Cal at home. Let me say that again. The Ducks escaped, at home, in Eugene, Oregon, against Cal. Oregon made it a battle, with Cal almost scoring with seconds remaining in the game while at the Oregon 2-yard line. After their bye week, it looks like the Ducks are still figuring out themselves on both sides of the ball.

The Bruins ran all over Washington up in Seattle, totaling 237 yards on the ground, with 131 of them coming from junior running back Zach Charbonnet. Senior dual-threat quarterback Dorian Thompson-Robinson totaled three touchdowns overall, two in the air and one on the ground. The defense stopped the Huskies’ run offense in its tracks, only allowing them 83 total yards, which is less than Thompson-Robinson had by himself.

The Sun Devils went into Utah, had a big 21-7 lead at halftime. But then, all of a sudden, the second half came, and they disappeared. The Arizona State defense seemed to leave the state of Utah, allowing them to score four second-half touchdowns and racking up 13 penalties and 115 total penalty yards. This is one of the biggest second-half collapses I have seen in the Pac-12, and trust me, I saw the WSU-UCLA game in 2019. Arizona State just lost the Pac-12 south division in the second half.

This is the hottest team in the conference now, and the Utes just keep winning, beating their biggest rivals in the Pac-12 South division. After coming off their biggest win of the season on the road, Utah returned to Salt Lake City and had a stellar comeback against Arizona State, led by sophomore quarterback Cameron Rising. The Utes did not give up in their last game, and as the only undefeated team in the Pac-12, and after two early non-conference losses, Utah is ‘rising’ their way to a bowl bid.

The Beavers are coming off of a bye but now have a huge test coming into Corvallis, Oregon, as they welcome Utah into Reser Stadium. Oregon State’s last matchup ended in heartbreak as they played a close battle against WSU on the Palouse but needed a bye week to gather themselves as they try to climb their way up in the Pac-12 again.

The Cougars keep finding ways to win football games, even being outscored in the fourth quarter in every single game except Cal and Oregon State. Even Stanford outscored this team in the fourth quarter this past weekend, and they still lost. The defense for WSU came in clutch on the final drive, once again, with another huge stop and a turnover on the last play of the game. Even with their head coach Nick Rolovich no longer with the WSU program, the ceiling for this team always seems to increase, even with distractions off of the field.

The Cardinal, after beating Oregon at home a couple of weeks ago, have now fallen to both Arizona State and WSU on the road. Stanford seemed to have control of the game early, opening to a 13-0 lead at the end of the first quarter. It all fell apart after the offense for the Cougars started to finally come alive. They pulled themselves back in the game in the fourth quarter and had the lead at one point, but the offense of WSU, which put up 389 total yards, seemed to be too much for Stanford to handle.

The Trojans are coming off their bye week, which was needed for them after they got stomped on at home against Utah. But now have their hardest game of the season coming up on the road, which could favor the Trojans in this matchup. The offense is clicking, but the defense is collapsing.

I cannot believe I am saying this, but the Huskies look awful, and this program is trending in the wrong direction. No bias here. After a much-needed bye, the Huskies hosted UCLA, which was a huge test to see if they could go in the right direction, and they fumbled the bag. The Huskies could not get the pass game going at all, and their run game was being stopped in its tracks by the Bruins’ defense. Washington had high hopes this season, and it seems as if the fall of the Huskies is upon us.

This offense was the worst offense in the Pac-12, with not scoring more than 14 points in a single game this season except when they faced Northern Colorado back in their first game, and they finally found their offense. The Buffaloes put up 34 points in their dominating win at home against Arizona. Their defense/special teams collected two touchdowns as well, but their offense finally put up some numbers. Although it is against Arizona, Colorado finally got their offensive rhythm back.

The Golden Bears lost a heart-breaking game at Oregon last week, where they had a chance to tie the game while being a couple of yards away from the endzone and could not get it in. California gave Oregon the biggest test of the season and almost upset them in Eugene, Oregon, but came up short. Cal played a tough Oregon team like they were the second-best team in the conference. The offense flowed well but just could not get the job done in a tough matchup for them.

This team got dominated on all three sides of the ball. Their offense could not produce, especially with allowing a pick-six, their defense could not stop the offense of Colorado at all, making them look great, and their special teams allowed a punt return touchdown. It’s really sad to see this team struggle so much, just have to believe in the future at this point.