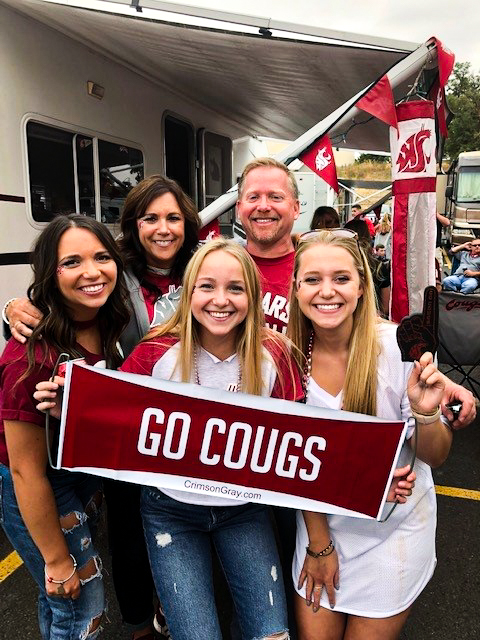 The Waage family is pictured here tailgating before a WSU football game, which the family did often when their daughters were growing up.

WSU is well known for its Greek community. For WSU alumni Dalene Waage and former Coug Hank Waage, Greek life is what caused them to cross paths.

Dalene said they initially met at a party hosted by her brother. Hank was in the same fraternity as her brother, Delta Chi, so he introduced the two of them.

Their first date was an impromptu formal held by Delta Chi, Dalene said. While it was not officially a formal, everyone treated the event like it was and got dressed up.

“We all went to a hotel … [and] had some drinks,” she said. “I don’t remember anything from that point on.”

Dalene said even though she made a fool of herself throughout the night, she felt taken care of by her brother and Hank; they brought her home and her roommate helped her clean up.

“I was not in good shape,” she said. “I put my contacts in my shampoo bottle, and [my roommate] informed me the next morning that I did go to the dance, even though I don’t remember anything about it.”

After their night together, Dalene said they continued on with their relationship as friends. Hank started dating her roommate, and she got back together with an ex-boyfriend from high school.

Dalene is from a small town, so her brother ended up dating her ex-boyfriend’s sister while she was dating him in college.

Dalene said she would see Hank regularly as he frequently visited her roommate in their dorm in Regents a lot. Hank dated her roommate for over a year. Dalene’s roommate is now married to one of Hank’s fraternity brothers.

After their breakups with their significant others at the time, Hank and Dalene continued to hang out a lot at Delta Chi. They would go to parties together as well, and eventually, Hank asked her to go to a barn dance Delta Chi was hosting.

“It was an overnight thing. We camped in tents and stuff, and we just had a blast,” she said. “We were inseparable after that.”

Dalene said the couple loved to swing dance and took a class together. There used to be a country bar in Moscow, Idaho, called North 40, and the couple got a group of friends to go dance there every Thursday night.

Dalene graduated in 1992, and the couple got married in 1993. Hank did not end up graduating from WSU, but he said he enjoyed his time in Pullman.

The couple now has three daughters. The two oldest attended WSU, while the younger is currently attending Western Washington University.

Dalene said when their daughters were young, the couple got invited by close friends to tailgate before football games.

“Our kids were best friends with their kids and just kind of started a thing where we just started going back and tailgating,” she said. “Our kids grew up in Lot 2 at the tailgate.”

Dalene said growing up going to the tailgates resulted in their two oldest daughters having no question about wanting to go to WSU for school; their youngest daughter decided to attend WWU because the party scene at WSU is not her thing.

Hank said he enjoyed visiting their oldest daughters during Dad’s Weekend, especially the football aspect of it. He said they would watch the team practice on Friday nights and then would go play touch ball on the practice field after they wrapped up.

Dalene said she was in a sorority when she was in school, and her daughters were in sororities as well. During Mom’s weekend, they would all go to fraternity parties together.

“It’s not my favorite thing to do at my age, but I suffered through them,” she said.